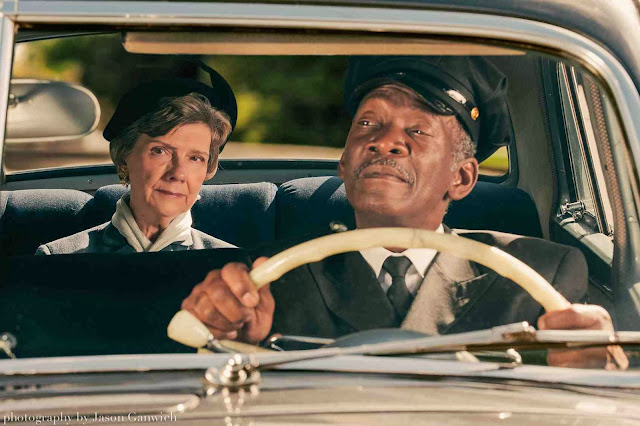 If you are only doing one show in a season it had better be perfect. As luck would have it, this one is.

Driving Miss Daisy is the one and only play of the season for the fledgling Dukesbay Productions in its new quarters in the Merlino building, which also houses the Grand Cinema. Three ideally cast, outstanding actors make this play, directed by Julie Halpin, as good as it gets.

The setting is Atlanta in 1948, a time and place of societal rules and racial divides that dictate every step of the complex dance of social and business life. Daisy Werthern has just wrecked a brand new car, but still objects vehemently when her devoted son, Boolie, insists she stop driving. Daisy is a feisty, opinionated, proud, elegant 72-year-old Southern Jewish widow who wants no help, or interference, from anyone.

Over her objections, Boolie hires a mature black chauffeur named Hoke Coleburn to drive his mother. Hoke is the perfect foil for Daisy; proud, clever, picaresque, gentle, patient, and skilled in the ways servants gently guide their employers. Daisy distrusts him and resents his presence in her house, her car, and her life, but in the face of his deferential charm and almost endless patience, she slowly comes to accept him.

Through a series of short scenes covering the next 25 years, we watch the gradual transition from employee held at arm’s length, to what eventually becomes a deep and trusting friendship. The various scenes are often quite funny, always compelling, and ultimately, deeply moving.

Syra Beth Puett (who is from Alabama and thus comes by her accent honestly) plays Daisy as if the role were written just for her. She has the look, demeanor, attitude, rhythm, and voice down pat, and ages convincingly through the years. She’s so perfect that it’s hard to imagine anyone else playing this role at all, much less doing it as well.

The same can be said for Malcolm West as Hoke. He’s got a delightful range of facial expressions paired with the right voice, accent, and demeanor to convince us he’s the real deal; that rara avis of menials whose confident self-respect, innate goodness, and genuine compassion can turn a cantankerous, suspicious, white Southern lady into a true friend.

Rounding out the cast is Robert Geller as Daisy’s adult son Boolie, and though his role is smaller, he turns in the same outstanding performance. He’s completely convincing as the gentle but firm, loving but sensible son who juggles a successful business, his own family, and the frequent demands of his mother.

Dukesbay’s space is perfect for this intimate show. A very wide, but not too deep stage faces just two rows of seats, the second of which is on a riser. Thus, everyone is close enough to hear every whisper and ideally positioned to see each facial expression.

A clever, tri-partite set, which uses lighting for set changes, lets the action take place at Daisy’s home, Boolie’s office, or the car in which Daisy and Hoke spend much of the play. David Wehmhoefer is responsible for both the set and lighting. The right period music (Nic Olson) and well-chosen costumes add their deft touch as well.

If this level of quality is any example of what we can expect from Dukesbay, then we are in for a real treat, and they are a most welcome addition to the South Sound theatre scene.

This is a sort run, so I’m going to urge you in the strongest possible tones to go see it. Yes, it’s that good.

While you are at it, you might also want to check out Alec Clayton's take on this play at:
http://alecclayton.blogspot.com/2013/11/dukesbay-productions-driving-miss-daisy.html

Posted by Dresdner's Theatre Reviews at 10:29 AM