Does she or doesn’t she? Only her therapist knows for sure.

A few minutes in, rumbling sound effects and a piercing scream let you know right off the bat that this will be a mystery thriller. Night Watch, a Lucille Fletcher play with decided Hitchcock overtones, has shown up at Tacoma Little Theatre just in time for Halloween.

The scream comes from wealthy heiress Elaine (Nicole Locket), who’s seen a bloody dead body in a chair through a briefly raised shade on the window of a vacant building across the way. No one else in the house sees anything; not her husband John (Gabriel McClellend), her visiting best friend Blanche (Jenifer Rifenbery), or the housekeeper Helga (Ziggy Devlan).

To complicate matters, Elaine is an emotionally fragile insomniac whose first husband, whom she says the aforementioned dead body resembled, died in a car wreck along with his illicit paramour. As is usually the case in this story genre, the police find no evidence of anything having happened, so by the time she sees a second body there, one resembling the blonde paramour, everyone, audience included, is starting to doubt her sanity.

As odd evidence mounts, like a blonde wig and a local who also looks like the dead man, we’re left wondering if she’s crazy, or is being played by her assumed friend and husband. Before long, her husband, aided by a psychiatrist who makes house calls, has convinced her to go to a mental hospital in Europe.

Through a sizeable chunk of both acts, the play lurches clumsily along like a sloppy jalopy with various secondary characters wandering through. Some will be key to the plot, but others seem merely to distract or add comic relief. Be patient, though, for ultimately the conclusion arrives with a very surprising twist that, while some might find a bit unsettling, I found to be quite satisfying.

Whether by accident, design, or direction, Locket and McClellend, both very skilled actors who’ve done superb and finely nuanced performances in the past, come off a bit two dimensional in this outing. That distracts from the inexorable building of tension that should be more gripping than it is. Rifenbery, by contrast, is quite convincing in a pleasantly understated performance as Elaine’s two-faced best friend.

John Pfaffe, a consistently reliable and skillful actor, plays the trench-coated police lieutenant Walker to a tee. Even more delightful is the flamboyant neighbor Appleby, played by another theatre mainstay, Joe Grant. He’s so compelling and likable that I wished he had more stage time.

The set, designed by Burton Yuen with props and set dressing by Becca Heines, deserves its own accolades. There’s obvious wealth behind the spare, modern 1970’s NYC apartment, which includes a perspective painted checkerboard floor, fine art on the walls, a Caldor mobile, an Eames chair, and a Mondrian inspired back wall skinned with a semi-transparent scrim. Throughout the play, the wall morphs and pulsates with a wide range of colors and lighting effects (Niclas R. Olson), adding both visual pleasure and mood.

Adding to the pleasant setting were the costumes (Francis Rankos), especially the iconic ones on Blanche and the hilariously outré ones worn by Appleby. The aforementioned sound effects (Joe Kelly) included eerie songs, street sounds, and the rest of the needed stage noises that bring realism to theatre.

If for you, October is just not complete without a foray into the eerie, you should add this play to your to Halloween to-do list.

The Turn of the Screw 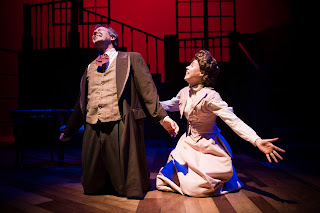 The Turn of the Screw at Centerstage pairs a deservedly famous, century-old psychological ghost story with surgically precise direction and an absolutely perfect cast in order to twist its audience through 90 riveting minutes of non-stop crescendo, leaving them dry-mouthed and spent. It’s a theatre experience you should not miss.

The story, if you don’t already know it, was written as a novella by Henry James in 1898, and has long been debated thanks to its delicious ambiguity. It’s liberally laced with overtones of religious and sexual repression, pedophilia, projection, fear, protective instinct, and the occult.

A young woman is hired as governess for two children, by an uncle who wants nothing to do with them and quickly exits the picture. She finds a homebound mute girl, Flora, and her older brother, Miles, who was just permanently expelled from boarding school for something apparently too disgusting to discuss. They occupy a country estate tended by housekeeper Mrs. Grose, who piecemeal fills in some of its chilling past. Their last governess, Miss Jessel, and a hired hand, Peter Quint, had carried on a torrid and unconcealed sexual affair before both died under somewhat odd circumstances.

Soon the governess starts seeing the ghosts of Jessel and Quint, and becomes convinced they are either in league with, or worse, manipulating the children for some nefarious, possibly sexual, ends. The pace builds to a gripping climax with another death and the complete dissolution of the household, but there is much left for the audience to decide. Did the children, or Mrs. Grose, also see the ghosts? Who was manipulating whom? Or for that matter did the governess actually see the ghosts and earnestly try to protect the children from them, or was she simply descending into her own destructive madness?

Director Alan Bryce crafted this superbly as a one-act play with a gripping pace that never lets up, nor lets go of the audience. A simple set (Ben Baird), mood enhancing lighting (Amy Silveria), a pair of ideal costumes (Rachel Wilkie), and some ghostly special effects (Christina Barrigan) supply the seamless underpinnings. What brings it all home, though, was Bryce’s choice of just two sterling actors to cover all the parts.

The governess is played by Helen Harvester, beautifully and adroitly filling out a most demanding role. She goes from innocent and exhilarating anticipation through the entire gamut of emotions to fear, aggressive determination, and quite possibly, pure madness. Throughout, she keeps it completely convincing, and eminently compelling.

Terry Edward Moore plays all the other parts; a narrator, a doctor, and the uncle, who all appear only briefly, as well as the major roles of young Miles and Mrs. Grose. He does it without ever changing costume, slipping quickly and seamlessly in and out of the various roles with attendant physical gestures and voices. His performance is so convincing that you quickly forget what he’s wearing or what his true gender is. It’s the epitome of great acting. Like the governess, he, too, traverses a huge range of emotional states and character aspects, from coolly detached to cripplingly overwrought. The last character, Flora, is not played, but rather her presence is implied by the actions and words of the two real actors.

The Turn of the Screw is but the opening salvo of Centerstage’s new season, and if this is any example of the quality we can expect, it’s going to be an amazing theatrical year.

The Turn of the Screw
Centerstage
http://www.centerstagetheatre.com/
Oct. 6 through Oct. 31, 2012
Posted by Dresdner's Theatre Reviews at 3:39 PM No comments: