Peter and the Starcatcher at Lakewood

Tomorrow is Easter, Passover, April Fool’s Day, and even my granddaughter’s birthday; an eclectic confluence of mostly unrelated events all falling on one day. Thus, it is fitting that Lakewood Playhouse chose this weekend to roll out the fast-paced, highly enjoyable, comedic hodge-podge that is Peter and the Starcatcher.

The play, adapted by Rick Elice and directed by John Munn, unfolds just as you’d expect of something written by comedy writer Dave Barry and adventure author Ridley Pearson. It’s an unlikely concatenation of action and gags thrown together like a teenager’s plate on a buffet line; all appetizers and dessert. Everything is delicious, but you’d hardly call it a well-structured culinary presentation.

There is a bit of a plot, convoluted and tinged with magic, that more or less sets up the famous story Peter Pan. We learn why Peter and the lost boys never grow up (magic star stuff that lets them relive their missed youth, stolen at an abusive orphanage), how Captain Hook lost his hand (nope, not to a crocodile), and why Wendy’s mother both remembers Peter Pan and allows him to abscond with her daughter.

Mostly, though, it is a platform to allow actors to zip through all their talents; acting, singing, dancing, and comedy, through fast-paced physical and aural gags, all with a vague air of improv about it. It’s a pastiche of all your comedy favorites, with hints of Marx Brothers, Monty Python, The Princess Bride, Blazing Saddles (yes, there are fart jokes), and many more.

Fortunately, for this sort of thing only works with exceptional actors, the cast was well-chosen to pull off this rubber-faced and rubber-limbed mayhem. Leading the pack is Black Stache, played by Kyle Sinclair, an actor simply dripping with stage presence, agility, and great comic delivery. He would have stolen the show if it weren’t for so much outstanding competition from the rest of the cast.

Next up is Mrs. Bumbrake, the nanny of female lead Molly (McKenna Sanford). Bumbrake is played by Martin Larson, who delightfully minces his way into the hearts of those who loved Mrs. Doubtfire and The Birdcage. Playing off him, and keeping up at every turn, is the bizarre, multi-faceted, love-smitten Alf (W. Scott Pinkston.)

Young Ms. Sanford as Molly easily holds her own, though she and her father, Lord Aster, rendered with stoic imperialism by James Wrede, are the most normal and serious of the lot, which is not saying much. The Boy who will eventually become Peter is, true to form, played most adroitly by a woman (remember Mary Martin?) named Emily Cohen, who, as it turns out, was also the fight choreographer. Filling out the lost boy trio quite nicely are Ted (Parker Dean) and Prentiss (Gunnar Ray).

More silliness, singing, dancing, and flamboyantly clever production numbers ensue from the rest of this gaggle of talent, including Tony L. Williams as Bill Slank/Hawking Clam, Chap Wolf as the wonderful sidekick Smee, Aaron Mohs-Hale as Captain Scott, Milton Manase in several roles, mostly as a low-life heavy, and the diminutive Nigel Kelley as the island king Fighting Prawn. In short, it’s an outstanding cast with a huge mix of talents.

They had the good fortune of being supported by an equally adept crew. After proving himself again and again, Blake York has a well-earned reputation as the best set designer around. This one evokes a children’s tree house built with random found boards cobbled together haphazardly; the perfect backdrop for childhood fantasizing of anything from a castle keep to a pirate ship. Set dressing and props, and there were a lot of them, all terrific, were by Karrie Morrison.

Eclectic and interesting costumes were by Naarah McDonald, wide ranging lighting by Jacob Viramontes, and music was by Deborah Armstrong. On something as complex as this, we should also give a nod to the undoubtedly overworked stage manager Madisen Crowley.

The play is long, but the rapid-fire comedy and non-stop action make it move swiftly. It may not print itself on your memory as one of the great, epic stories, but I think it’s fair to say you’ll come away fully entertained.

Peter and the Starcatcher
March 30 to April 22, 2018
Lakewood Playhouse
https://www.lakewoodplayhouse.org/

Posted by Dresdner's Theatre Reviews at 11:00 AM No comments:

In 1970, the soon-to-be legendary duo of Tim Rice and Andrew Lloyd Webber wrote a rock opera about the last week of Jesus’ life, as seen through the eyes of Judas. The result, anachronistically set in modern times but with all the period Roman references intact, is Jesus Christ Superstar, a dazzling song-and-dance extravaganza with all the dialogue delivered in song. This fast-paced, energetic, and visually stunning  version, which opened last night at Tacoma Little Theatre, is both directed and brilliantly choreographed by Lexi Barnett.

The play opens as his followers welcome Jesus (Bruce Hassl), replete with a Stratocaster guitar slung around his neck, to Jerusalem. Judas (Loucas T. Curry), in conflict with his close friend’s politics and his followers’ aggrandizement of him, tries to dissuade him. Judas is worried that the anti-Roman fervor and willingness to proclaim Jesus king will result in a backlash that will harm not only all of his followers, but many other Jews as well. He betrays Jesus to the priests, who are in league with the Romans and want Jesus gone.


The very large ensemble cast, including dance captain Jill Heinecke, who must have had her work cut out for her, was tight, and impressive. In particular, the almost non-stop dance numbers were inventive, visually stunning, and bristling with all the energy and pageantry of a three ring circus. There are too many cast members to call out individually, but the ensemble certainly deserves a bow. 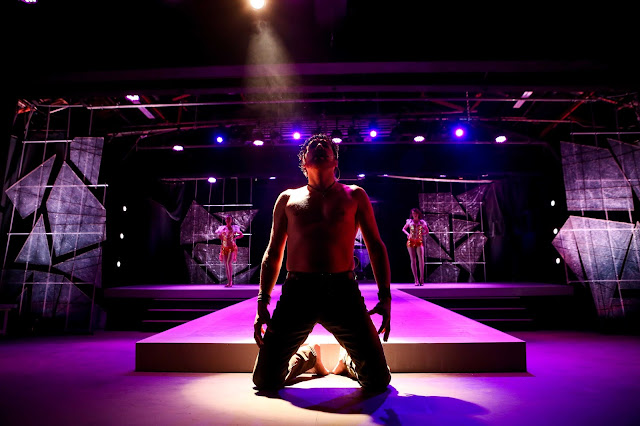 All this played out on Blake York’s stunning set ringed with metal tube grids holding huge shards of glass-like plexiglass surrounding a gigantic raked, horizontal cross that spans both the width and depth of the stage. Abetted by an ever-changing, strobing, multicolored light show (Niclas Olson) and props by Jeffery Weaver, who was also responsible for hair and makeup, it is, in a word, dazzling.

The costuming, by Michele Graves, was equally brilliant, and ran the gamut from priests dressed to the nines in matching suits and red power ties, to characters spanning a range of styles and periods including hints of Babylonian dancing girl,  modern grunge, 70’s era hippie, and even Hawaiian shirt casual.

The one opening night glitch, apparently caused when the sound program crashed earlier, was an out-of-balance and overly loud musical score. As a result, it was often hard to understand the lyrics, except for the three strongest vocalists in the cast, Jesus (Hassl), Mary (Milburn) and Peter (Christopher Sweet.)

Yes, this property has been done a lot over the past 47 years, but TLT’s version most certainly holds its own, and is a visual and audio delight for its audiences. Not surprisingly, the packed house on opening night absolutely loved it. As a bonus, managing director Chris Serface revealed all the plays that will be in TLT’s upcoming 100th season during his curtain speech. There’s a lot to look forward to.

It’s a fairly short play (two 45 minute acts) and the intense pacing and energy makes it seem even shorter, but crammed in to that timespan is as much color, light, song, dance, beauty, and energy as you can ever hope to ask for.