Shadows on the Rising Sun
by Michael Dresdner 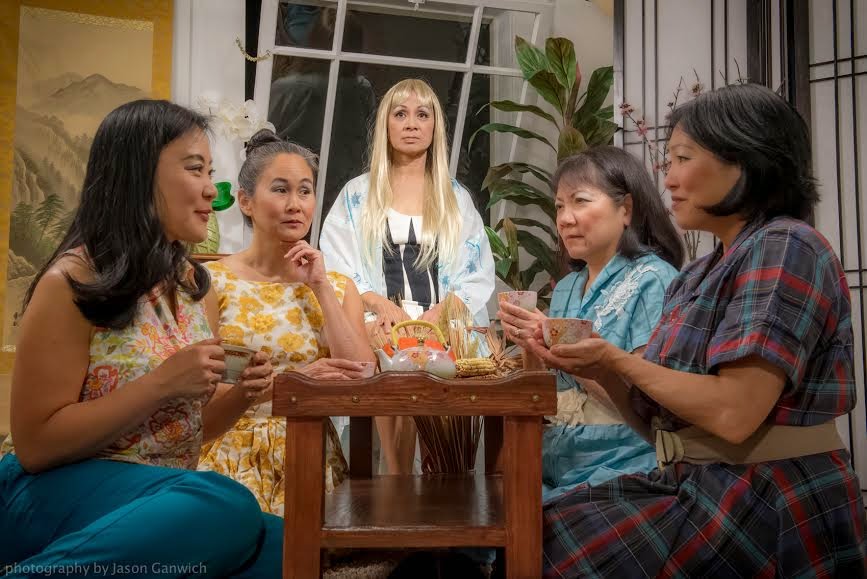 Dukesbay Productions opened its season last night with a flawless and gripping presentation of Velina Hasu Houston’s play Tea. With it, the fledgling company has definitively affirmed its credentials as a top notch theatre group, laying to rest any suspicion that last year’s Driving Miss Daisy was merely a fluke. Yes, they still dispense such candy floss as Java Tacoma, but clearly, they can deliver the goods as well.

The play opens as the lights go up on a beautiful, crisply serene teahouse with low table, sliding shoji screens, and a sweeping, sumi-e style backdrop. Foreshadowing the conflicts to come, Kate Smith sings “God Bless America,” followed by Tammy Wynette’s “Stand By Your Man,” which in turn gives way to a calming, traditional, Japanese samisen song. In spite of appearances, we are just outside Ft. Riley in Junction City, Kansas, and the year is 1968.

Himiko (Eloisa Cardone) steps out on stage, barefoot and bewigged, her forlornly slack kimono draped over her “American” dress. She launches into a powerfully heart-wrenching disgorgement of emotion, revealing years of pain, disappointment, and betrayal. Then, with dignity and hope both exhausted, she takes her own life.

From that moment on, the five women of Tea will hold you in thrall through an intimate, deeply evocative journey into the lives and travails of Japanese “war brides” striving  to survive in post-war America.

By the time the virtual curtain dropped some 90 minutes later, my stomach was clenched and my mouth parched. This play was that powerful.

While gathered to deal with the aftermath of Himiko’s suicide, four other brides, each with a decidedly different story and finely crafted characters to match, sip tea and recount the past so vividly it comes alive. All five, the living and dead, tell their stories through flashbacks, at times portraying their younger selves both here and in Japan, their very Americanized children, and even their occasionally boorish husbands.

All giddily in love at the time they wed, these five women had no idea what cultural bias and upheaval they’d face stateside once their military husbands brought them “home.” Aided by well-chosen costumes and props, they flesh out their stories.

There’s Himiko Hamilton, married to an abusive Southern redneck and trying to cling to her dignity in the face of egregious hurts, and magnificently brought alive in an absolutely stellar performance by Eloisa Cardone.

Like a still, deep lake, Teruko MacKenzie (Joy Misako St. Germain) is an anchor of serenity, so contentedly devoted to her husband that even her daughter feels some slight.

Setsuko Banks (Susan Mayeno ) copes surprisingly well, her Asian fortitude as her bulwark against the added disdain she had no idea would come from having married a “black” soldier.

Atsuko Yamamoto (Aya Hashiguchi) married a Japanese-American, and wears her haughty superiority proudly, seeing herself as therefore more Japanese than the others.

The most Americanized of all, Chizuye Juarez (Kathy Hsieh) wears slacks and has mastered not only English (replete with requisite nicknames,) but much of her accent as well, perhaps an overreaction to her Latino husband.

The entire ensemble cast is amazing, individually and together. These are all performances of the highest caliber, and every one of these women deserves the loftiest praise an actor can get.

Technical support is no less. Adroitly directed by Randy Clark, the play unfolds on a wonderful set designed by Burton Yuen and built by Hector Juarez, with a divine bamboo and wood floor painted by Jen Ankrum and Blake York, and a sweeping sumi-e backdrop designed by Lois Yoshida and painted by Steve Chanfrau. Nicolas Olson and Bethany Bevier did the excellent sound and lighting design, and Jeffery Weaver assembled a flawless array of costumes and props. During one segue there’s a moving, period-evocative slide show by Mick Flaaen.

I really can’t say enough good things about this play, so I’ll stop here. Suffice it to say this is everything great theatre is meant to be; a gripping story, magnificent acting, and ideal technical support. In short, this is one production you really don’t want to miss.
Tea
Oct. 30 to Nov. 16, 2014
Dukesbay Theater
http://dukesbay.org/

Posted by Dresdner's Theatre Reviews at 3:24 PM No comments:

Dial M for Murder at TLT 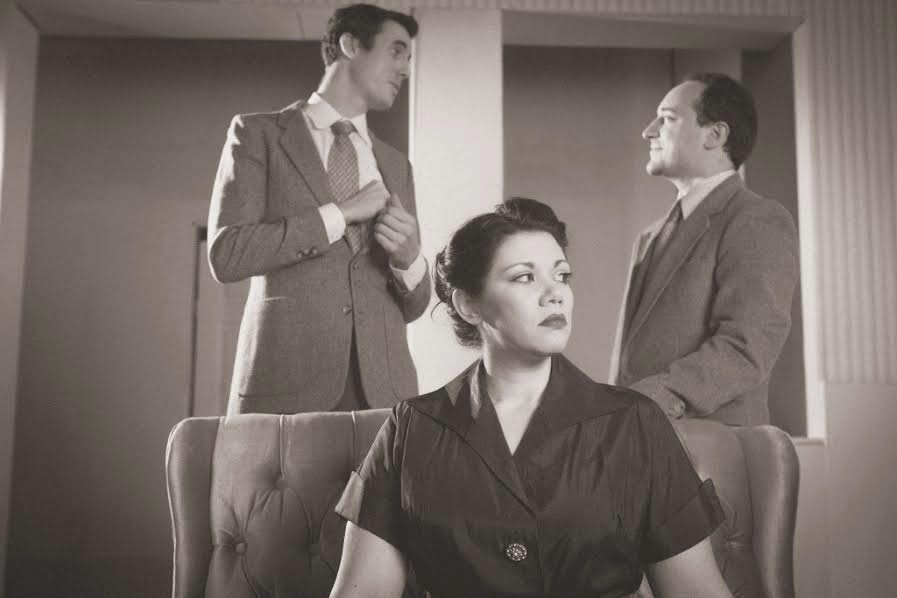 I say thriller rather than mystery because you, the audience, get to know everything and see everything as it happens. The suspense comes from the various characters, including the police, trying to figure out what really happened while others are actively trying to hide the truth.

The plot is simple and classic. Charming tennis star Tony (Brent Griffith) married Margot (Deya Ozburn) for her money, and now that he’s discovered she is having an affair with Max (Jacob Tice), he decides to kill her and inherit it. He maneuvers Captain Lesgate (Christopher Rocco), an old acquaintance with a shady past, to agree to do the deed through a combination of bribery and blackmail. Things go awry, but the resourceful Tony redirects things to his advantage. The fly in the ointment is police inspector Hubbard (Robert Geller) who isn’t content to accept the situation at face value. 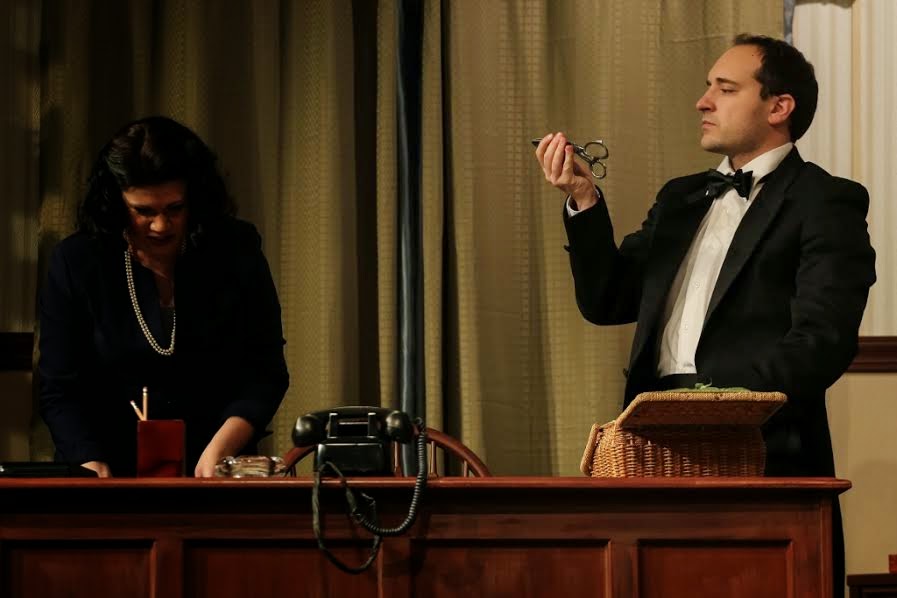 Directed most capably by pug Bujeaud (yes, that’s lower case p and upper case B, and no, I don’t know why,)  Dial M for Murder was a solid, satisfying thriller. With crisp, realistic pacing and clever small room blocking, she even managed to prevent the front end of the play, overburdened as it is with exposition, from being dull or boring, and that’s no mean feat.

There were no poor actors in this production; it was a well-meshed and quite competent ensemble cast. In particular, I found myself rooting for Griffith’s very appealing Tony probably more than I should have, seeing as he is supposed to be a villain. Geller, as the somewhat Columbo-like inspector, also endeared himself, playing the crisp, quintessential British CID man with just the right balance. 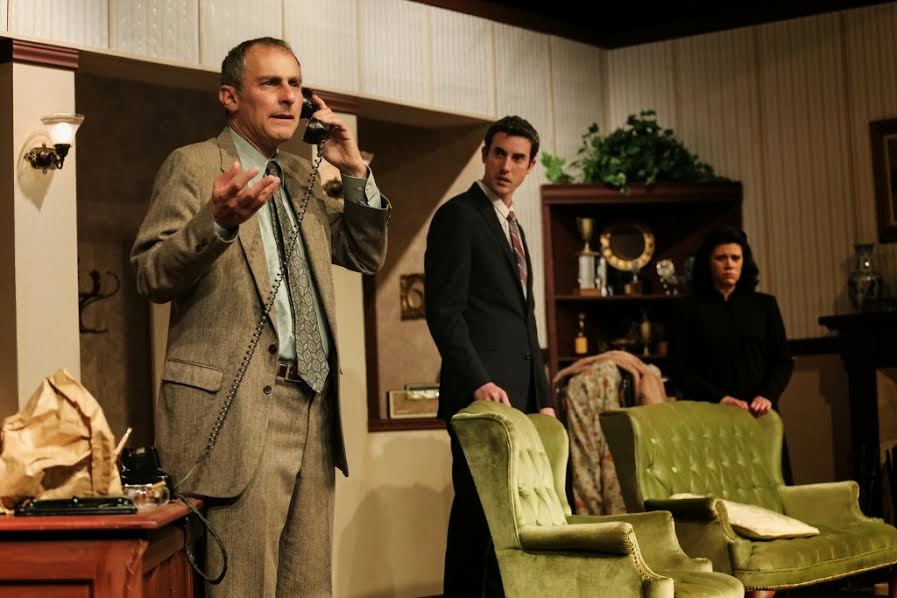 There were, let’s say, choices (a nicer word than weaknesses) that I might have imagined a different way. Between scene changes were noticeably long, though the sound designer (Darren Hembd) managed to fill them with very pleasant and appropriate music. The killing scene (yes, there’s a killing – come on, people, the word murder is in the title) was more Capoeira than Terminator; more artistic dance than straight brutality. Captain Lesgate, almost excessively fidgety and on edge, never crossed into menacing, but was rather easily cowed into agreeing to Tony’s scheme.

Perhaps most surprising was the lack of romantic chemistry between illicit lovers Max and Margot. Granted, she’s British, but he’s American. I’d have expected something a lot closer to raw lust. Again, these are all choices, and everyone has his or her taste.

All this played out on a beautiful and perfectly appointed set by Blake York (who is also credited as the fight choreographer) with equally good props by Jeffery Weaver. Costumes by Michele Graves were unobtrusive but fitting. Lighting design by Pavlina Morris really shone (groan!) during the dusky death scene, with cleverly positioned flashes of illumination coming from an open bedroom door.

The final analysis? As the Brits say, “Good show!”