The Underpants at TLT 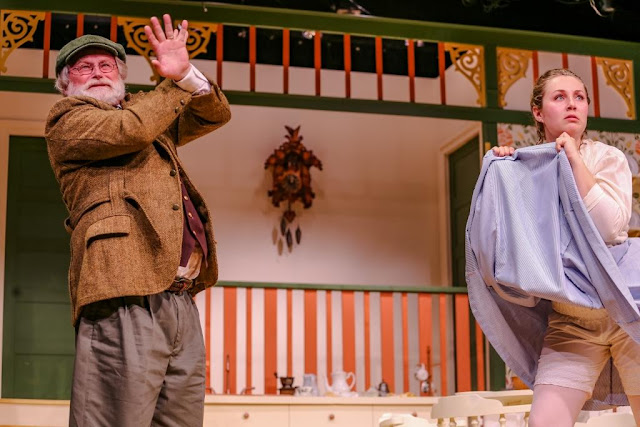 Written by Steve Martin (yes, that Steve Martin) and directed by Jennifer York, it’s a situational comedy deeply larded with set ups and punch lines, double entendre, and sexual innuendo. Yet in spite of the fact that sex, lust, and adultery are the central theme, it’s actually clean enough for a G rating. Though bad intentions and willing partners abound, no one actually manages to bed anyone.

Set in 1910 Germany (for no apparent reason) the entire play takes place in the living room/kitchen of an apartment and is executed by a handful of very competent actors. And speaking of the set, it is outstanding; another spot on job by Blake York, replete with and adorable period stove, refrigerator, and eye catching stenciled “wallpaper.” Ditto for costumes by Michele Graves, props (and I assume the wonderful set dressing) by Jeffrey Weaver, and lighting by Niclas R. Olson. In short, everything well up to TLT’s high standards. 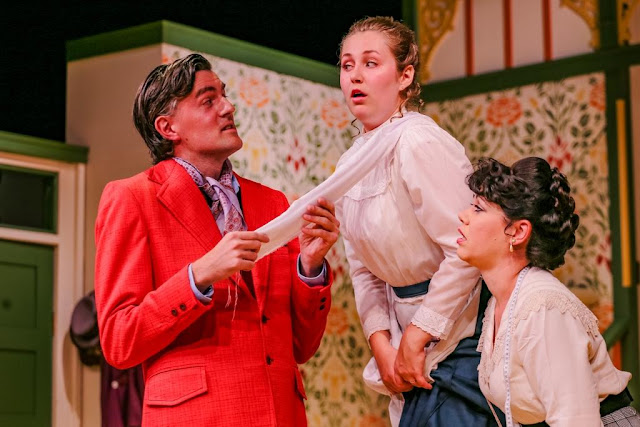 The play opens with Theo Maske (Jed Slaughter), a rigid, mysoginistic, mid-level bureaucratic drone, berating his “little wife” Louise (Cassie Jo Fastabend) because while watching a parade on the street, her underpants fell down. He’s sure people noticed and that ruination will follow. This being a comedy, the exact opposite happens, but that’s later.

They want to rent out an upstairs room for income, and accidently do so to two people, both of whom want to be there because of the morning’s underpants incident. Frank Versati (Ben Stahl) is an almost accent free Italian poet whose instant lust for Louise has him torn between wanting to consummate adultery or simply write poetry about it. His barber, Benjamin Cohen (Andrew Fry), who repeatedly insists he’s not a Jew, is also smitten, but his goal is to block Versati’s intentions. Meanwhile, Gertrude Deuter (Deya Ozburn), Louise’s best friend who lives upstairs and eavesdrops via the floor vent, comes and goes regularly, attempting to both push Louise into what she sees as a much needed fling, and get one for herself with husband Theo. Eventually a Scot named Klinglehoff (Dale Bowers) and “The Distinguished Caller” (Bob Lozier) make appearances, but their roles are superficial at best. 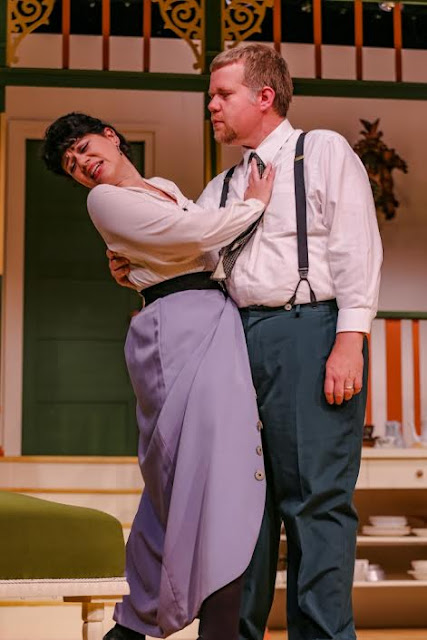 It’s not hard to imagine this played to the absurd, with exaggerated accents and physical histrionics, but this version has been dialed back to retain a modicum of decorum. Depending on your comedic tastes, that could be welcome or disappointing.

If you are getting the impression that this is a long, elaborate, TV comedy sketch reminiscent of its SNL roots, you’re spot on. And yes, it is genuinely funny, fast paced, and quite pleasant to watch, with the added advantage that there are no commercial interruptions. Admittedly, you may see some of the jokes coming from a good bit off, but that’s ok.

In any case, don’t look for deep meaning or emotional upheaval. This is mindless entertainment, and may be just the thing to ease back into the theatre season.

Did I mention that this play was silly? Thoroughly silly.

Posted by Dresdner's Theatre Reviews at 8:11 AM No comments: