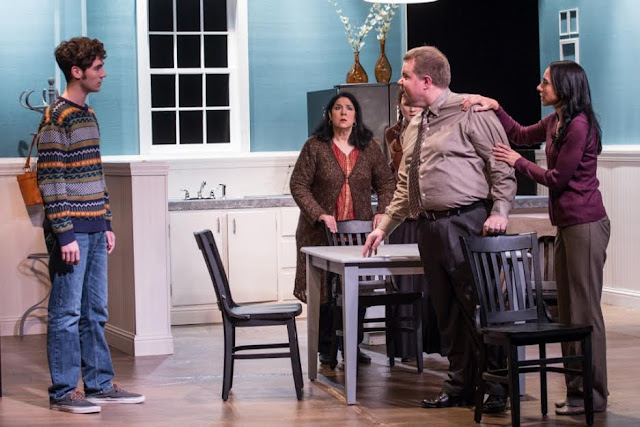 Becca (Alissa Cattabriga) and her husband Howie (Jed Slaughter) have recently lost their young son to an accident via a car driven by a teenager named Jason (Vinny Peitz.)  The pair struggle to deal with the loss as it takes its toll on their relationship, and emerges at times in their interactions with Becca’s sister, Izzy (Elena Martinez), and their mother, Nat (Dana Galagan.) Separately and together they endeavor to maintain a normal life while sometimes being cracked open by their profound loss, the pain manifesting itself as interpersonal frictions and quickly capped outbursts. 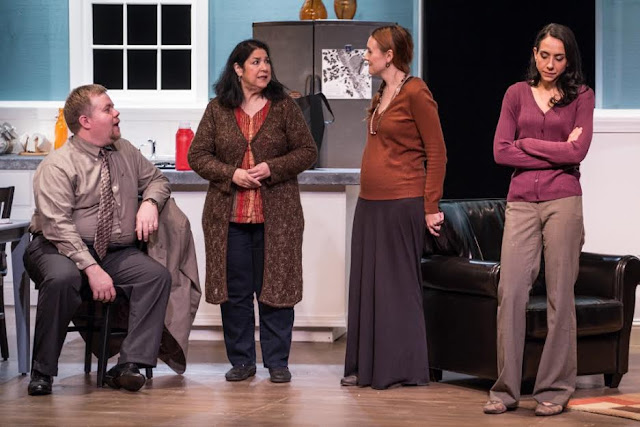 And yet, this is not a play that leaves the audience exhausted with depression. You feel the various characters’ pain, but you are not disabled by it. Neither a story of hopeless descent into oblivion, nor a polyanna where, “poof,” everything becomes rosy at the end, it is the play’s very realism that makes it endurable in the face of the palpable emotion it releases. 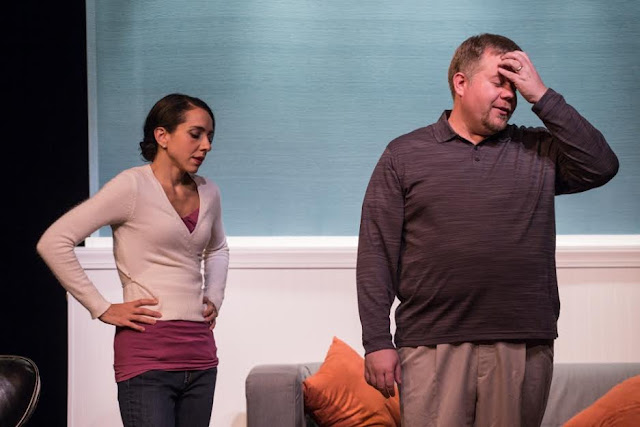 As for the cast, I could cite each actor, call out one of their standout scenes, and laud each in turn, but there’s no point. Perfectly cast, they all deliver polished, nuanced performances, separately and as a well-oiled ensemble. Go ahead; you can all take a bow on this one. 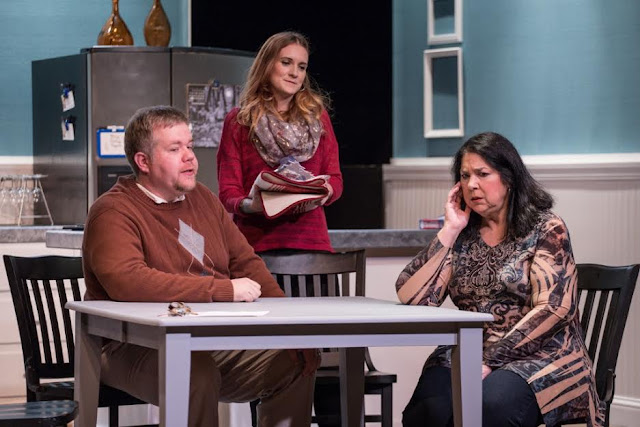 Their respective characters are so finely crafted and believable that we end up caring about and liking every single one of them. All are wholly recognizable rather than exaggerated; people grappling with their pain, sometimes succumbing to irritability when it is overwhelming, but trying to help one another when they are able. Their essential humanity shines through and reaches us in a way that is endearing, aching, and yet bearable. It calls to mind a line from a very different play: “Pain makes man think, thought makes man wise, and wisdom makes life endurable.”

Blake York’s outstanding set is a thoroughly recognizable Larchmont home owned by neat, respectable folk; a neat, sensible living room replete with suble, but eerily prescient rows of empty picture frames, a clean, practical, focus-of-daily-life kitchen, and a bedroom that appears and disappears like a Chesire cat. Everything else fits the setting perfectly as well; costumes by Michele Graves, light and sound by Niclas Olson and Chris Serface, respectively, and Jeffery Weaver’s apropos, and often mouthwatering, props. It’s a challenging show to stage, so Stage Manager Becca Rex and her ASM Noelle Edlin also deserve a bow.

Look, I’m not going to pretend this play is joy unbounded. While there are laughs, its more about feeling something real along with the cast than about mindless entertainment. On the other hand, great theatre like this is quite rewarding in its own way, and this stellar production is very much worth your time.