Believe in Yourself: The Lena Horne Songbook at Centerstage


Stormy Weather is headed this way!

a timely advisory by Michael Dresdner 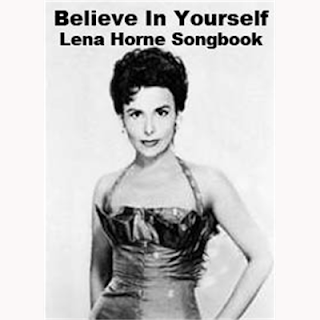 Local impresario David Duvall, of Purple Phoenix Productions, is at it again.

His strategy is fairly simple. He chooses a great singer from the past who is renowned for performing works from the finest composers, then crafts a flawlessly paced, exhilarating concert performed by the best singers of today. For good measure, they are backed by a band of amazing instrumental musicians, led by Duvall himself.

His previous offerings have been astounding, and thankfully, another one is on the way. This time the spotlight is on the great Lena Horne, and the songs will be split among three uber-talented women; Stacie Calkins, Laurie Clothier, and LaVon Hardison.  It’s called BELIEVE IN YOURSELF: The Lena Horne Songbook and it’s coming to Centerstage Theatre in Federal Way on Saturday, Feb. 16, 2013.

That’s the good news. The bad news is that this show is for one night only.

Yes, you read that correctly; only one performance.

For those who go, there’s a promise of many legendary Horne numbers, including, to name just a few, Just One of Those Things, Bewitched, Bothered and Bewildered, The Lady is a Tramp, Where or When, Can’t Help Lovin’ That Man, and of course, Stormy Weather.

I was lucky enough to attend a couple of Duvall’s previous offerings, and they were beyond delightful. Each was one of those nights that left you thankful you were in the audience. However, the word has gotten out, and not surprisingly, the last performance I attended was completely sold out.

This one promises to be way too good to miss, so instead of a review, I’m offering a word to the wise: Get tickets for this, and get them early. Odds are, this performance will also sell out, and those with tickets will be ecstatic to have been present. Trust me; you want to be one of them.

BELIEVE IN YOURSELF: The Lena Horne Songbook
February 16, 2013 (One night only!)
Centerstage Theatre
www.centerstagetheatre.com

Posted by Dresdner's Theatre Reviews at 1:04 PM No comments: 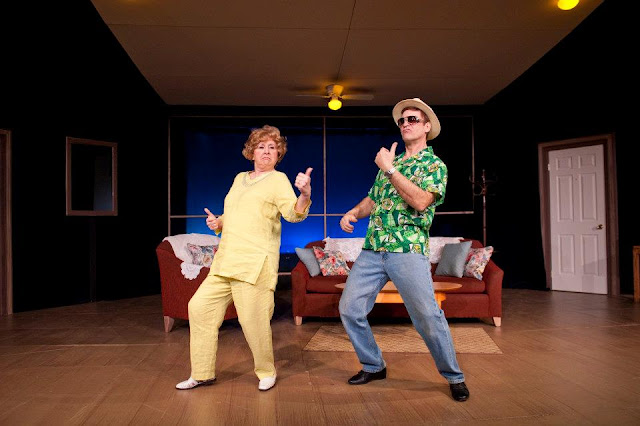 Six Dance Lessons in Six Weeks at Tacoma Little Theatre is about as comfortable and delightful an experience as you can imagine having in a theater.

This sweet, poignant slice of life nimbly opens a window onto two endearing characters who waltz right into your heart with a gentle rhythm and a touching realism. What follows is a very agreeable glimpse into humanity at its finest, and when it was over, I fervently wished I could stay seated and click the remote to watch another episode. It was that enjoyable.

Lily Harrison (Sharry O’Hare) is a refined Southern Baptist minister’s widow and former school teacher living in a gulf-view Florida retirement high rise. She contracts for six dance lessons over six weeks to be taught in her apartment.

First-time instructor Michael Minetti (Micheal O’Hara), a sassy, irreverent transplanted NYC gay man, shows up and immediately creates friction with his rather coarse humor and language. Sparks fly, but they manage to make it through the first lesson. By the time six weeks have passed, they’ve gradually unveiled their secrets, pasts, pains, and warmth to one another, and as expected, formed an indelible bond.

The bulk of why this works so well is undoubtedly the two actors. Real life couple Micheal and Sharry are both superb actors on their own, each with acres of credentials and well deserved accolades. Together, they mesh divinely, and work together often enough, and well enough, to merit being called Tacoma’s Lunt-Fontannes. One can’t say enough about how satisfying it is to watch that magic combination of great acting and great chemistry.

The fine acting could only have been helped by director Frank Kohel, and he deserves credit for an excellent job. So does the rest of the production crew.

The set, by Blake York, is the quintessential retired-to-Florida apartment, right down to the furniture brought down from up north, the clean walls, the always running ceiling fan, and the huge glass wall providing an ocean view. Lighting, which wrapped each scene close in a waning spotlight, was well executed by Niclas R. Olson.

Each scene had new costumes by Michele Graves, who also did props. There were fourteen costumes in all, often eye-catching but always perfect, adding another dimension to both to the scene and the characters. There was not a single aspect of this production that was not beautifully executed.

I realize the theatre blurb does not sound like much. “Why would I want to watch someone taking dance lessons?” You wouldn’t, of course, but that’s merely the setting.

Ultimately, this play is about the tender blossoming of a sweet, but unlikely relationship that heals two people who desperately need one another, whether they realize it or not.

Trust me on this one. Go see it. You will thank me.

The Children's Hour at Lakewood

Suffer the children
by Michael Dresdner 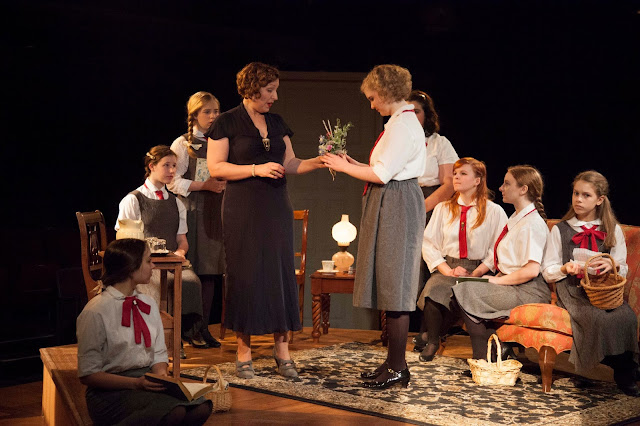 Making entertainment of something as darkly disturbing and emotionally charged as The Children’s Hour is no mean feat. Nevertheless, director John Munn pulled together some wonderful actors on a cleverly innovative set to offer up a moving, if upsetting, evening of serious drama at Lakewood Playhouse.

Apparently based on a chillingly similar event that occurred in Scotland in 1810, this 1934 play, which was Lillian Hellman’s first successful work, is set in a girls’ boarding school run by two women. Karen Wright (Maggie Lofquist) has been putting off her beau, Dr. Joseph Cardin (Paul Richter) for years in order to work with close friend Martha Dobie (Deya Ozburn) to get their school off the ground. Martha’s cross to bear is her loose-lipped, critical aunt, Lily Mortar (Laura Kessler), whose claim to fame is a somewhat embellished theatre career and whose personal mission is to force etiquette onto the school’s girls.

One of the girls, Mary Tilford (Kira Zinck), is a spoiled, duplicitous bully who runs away to the home of her influential dowager grandmother (Carol Richmond). Mary tells her grandmother that the two schoolmarms are having a lesbian affair. Grandma makes calls, and overnight, all the students are removed from school.

When Rosalie (Gabriela Aleman), a mousy classmate with a secret to hide, arrives at the house, Mary blackmails her into corroborating the lie. After a failed slander suit and damning publicity, both the school and the women’s personal lives collapse into complete wreckage. When the truth finally comes to light, it is too late be of any help, as the lie has destroyed all of the adults it touched.

Anchoring the play were outstanding portrayals by the two schoolmarms. Lofquist was exceptional as the stolid, caring Wright, in love with the doctor but loyal to her students and colleague. Ozburn offered up a first-rate profile of Dobie, first pushed to the brink by her loquaciously critical aunt, then un-hinged by the destruction created by Mary’s lie.

The girls making up the student body formed an excellent ensemble supporting cast, led by two standouts. Zinck did a superb job crafting a convincingly conniving Mary, swinging from put-upon innocent to self-centered bully in the wink of an eye. Backing her up was Aleman’s equally fine portrayal of the timidly insecure and easily manipulated Rosalie.

Along with mood enhancing lighting, Judy Cullen provided a very clever set, beautifully painted by Kim Izenman, consisting primarily of a central, two-tiered mesa as the main acting space. Its proscribed top lent an appropriately forced intimacy to the many emotional scenes. The surrounding second tier provided imagined hallways and anterooms where entering and exiting actors could be seen by the audience, but not, in our imaginations, by the players in the center. Normal doors in oversized frames at the two corners insinuated a false perspective, helping us establish the mental image of a large, rambling farmhouse.

Much of the costuming by Kelli McGowan was spot on, from the matronly garb on Dobie and Wright to the varied, yet consistent, school uniforms on the girls. However, there were some odd choices. Joseph seemed too primly coiffed and clad for a working doctor and the aunt and the dowager appeared underdressed; the former too sedately for her pretensions and the latter too modestly for her station.

Great drama, and this fine production qualifies, entertains not with frivolous distraction but with emotional upheaval. When you go to see The Children’s Hour, and you should, gird yourself for what is coming, and go with the assurance that your emotions will be torqued through a buffeting but worthwhile journey.

Posted by Dresdner's Theatre Reviews at 9:42 AM No comments: