Not a theatre review, but...

How a batch of high school kids made life more fun for children with cancer.

This year, at a camp on Vashon Island for children with cancer, 100 campers will each get to build and take home a ukulele, thanks to a few local businesses and the volunteer efforts of students from Rogers High School’s woodshop program.

It all started with a challenging request. My daughter, her boyfriend (both survivors of childhood cancer) and my son all volunteer every summer at Camp Goodtimes, a free, one-week sleepover camp run by the American Cancer Society for children who’ve had or have cancer. Each day is filled with fun activities to allow the kids to escape what for many is a rather harsh reality. There’s a cruise on an Argosy boat, a circus brought by the Rotary club, a whipped cream fight and much more.

So in April, when my kids asked if I could come up with a way for the older campers to make ukuleles for themselves, I simply asked “how many ukes, how old are the kids, and how much assembly time will they have?”

“One hundred kids, aged ten through fourteen, and they’ll have less than an hour.”

Thus began the challenge; make 100 uke kits simple enough to be assembled safely in half an hour by kids who’d never done woodworking, and somehow make it all cheap enough to donate. The deadline was less than two months away, and my company, Rainy Day Ukes, is a one-man shop. I’d need help.

I drew up plans for a pineapple shaped body cut from a 6” by 8” board, with a five inch circular rout from the back leaving barely an eighth inch top remaining. The bridge would be a wood triangle and the neck a stick of wood, slotted and fretted. It would be bolted into a pocket routed in the top, with zither pins at the bottom of the body to tighten the strings. Once knotted, the strings would go through small holes in the neck just past a zero-fret nut. (I’ve included the original drawings, and photos of the parts, in case another charity-minded group wants to do this for another worthy set of recipients.) 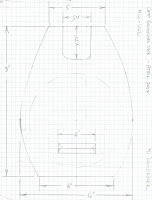 I took neck wood and uke strings from my shop and bought hundreds of zither pins and tuning wrenches. Ken Warmoth of Warmoth Guitars immediately offered the body wood, screws, fret wire, and all the programming and CNC running time to slot the necks and cut the bodies. Several local individuals donated money to offset the cost of the parts, but we also needed labor to assemble the kits. A Pierce County employee and three Argosy employees helped out, but the lion’s share came from the local high school. 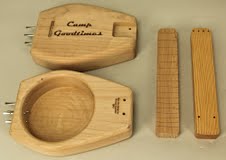 Jon Cerio, the woodshop teacher at Rogers High School in Puyallup, introduced the idea to his class, and they took to it. His students cut the bodies on their CNC machine, shaped and fretted necks, and did the secondary machining and sanding. They then used their program’s laser to engrave each uke with “Camp Goodtimes.”

And that’s how a few people in Puyallup and a bunch of enthusiastic high school kids gave up their time to a project to cheer up youngsters stricken with childhood cancer. By the time camp is over, 100 kids will head home with a ukulele they put together themselves, with a little help from a very caring community.

Posted by Dresdner's Theatre Reviews at 11:12 AM