Not your father’s sleuth 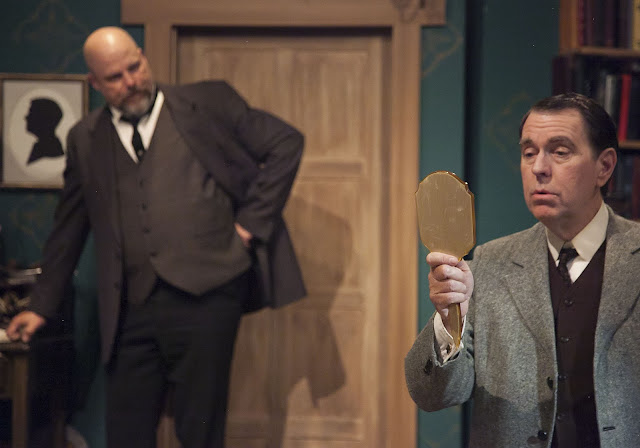 Lakewood Playhouse often opens the season with a classic whodunit by Christie or another major writer. If you think that’s what they’re doing again this year, disabuse yourself of that notion. Sherlock’s Last Case, written not by A. Conan Doyle but by Charles Marowitz, is a far cry from a classic Sherlock Holmes story.

Yes, it contains deception and mystery, and offsets it with humor, mostly of the one-liner variety. But while it is overlaid upon the familiar Doyle characters and Baker Street set, the resulting play is not typical.

Where most mysteries dole out clues and let you discover them along with the detective, this one has almost none of that. In fact, except for the opening dialogue, a recap of a former case that includes a clear foreshadow of one of the play’s surprises, there is little true sleuthing to be found.

Instead, the mystery involves not a case per se, but a dark corner in the relationship between Sherlock Holmes (Steve Tarry), Dr. Watson (John Munn), and the specter of nemesis Moriarty in the guise of his offspring (Rachel Gamello/Mark Adam Rud). The small cast is rounded out nicely by the familiarly brusque Inspector Lestrade (Terence Artz) and ditzy housekeeper Mrs. Hudson (Cassie Cahill).

That’s in large part because the author redefined both Watson and Holmes as very different people than the ones Doyle created, at least insofar as director Christian Carvajal has interpreted him. The agreeable, stable Watson is replaced by a seething, scheming factotum more resentful than convivial. Holmes, usually a coldly focused genius who blithely but benignly dismisses anyone not pertinent to the case at hand, becomes a more likeable fellow on the surface, but one saddled with a disturbing streak of petty vituperation.

The acting is what you’d expect from a very seasoned cast, and all cover their parts well. Tarry’s Holmes is charming and believable, while Munn’s Watson is stolidly consistent, except perhaps for a limp that hasn’t decided whether to come or go. For better or worse, both inject good bit of their own personas into their respective characters. Cahill creates a notable contrast to what one expects of a housekeeper, adroitly executing Mrs. Hudson as a delightfully batty, easily inebriated charmer.

The set, done in deep thrust, is lovely; an artful combination of the skills of designers Larry Hagerman and John Munn, props master Jeffrey Weaver, and set dresser Hally Phillips. They managed to create a Baker Street that is both comfortably familiar and brimming with delightful eye candy. Much of it does not get used as part of the play, so take time to drink it all in before the opening curtain. Blocking is done so that there’s no advantage or disadvantage in any of the three seating sections surrounding the action. No matter where you sit, you’ll see it all.

You’ll forgive me if I don’t outline the plot, since figuring out the plot itself is mostly where the mystery lies, and I don’t want to ruin it for you. Instead, I’ll just say that nothing is completely what it seems to be, but then, isn’t that true of all mysteries?