A perfect storm
by Michael Dresdner

Steel Magnolias is an amazing property, beautifully written with endless wit, darting one-liners, richly crafted characters, and ultimately, deep, wrenching emotion. Tacoma Little Theatre graced it with an outstanding ensemble cast and a sterling director who added sparkle, humanity, and flawless timing to create a perfect storm of a theatre experience. This is truly a must-see play.

Great plays start with great choices, and director Elliot Weiner has made them well, choosing what felt like the perfect actor for each of the character-rich roles. He added excellent pacing -- fluid, snappy, and captivating -- and combined it with some very clever staging. A large imaginary mirror at the front of the stage allows the actors to look at one another in its reflection while always facing directly toward the audience. The conceit helps draw us intimately into Truvy’s carport-turned-hair salon so well that in spite of the proscenium stage, we feel like we’re right there among the scissors and combs. 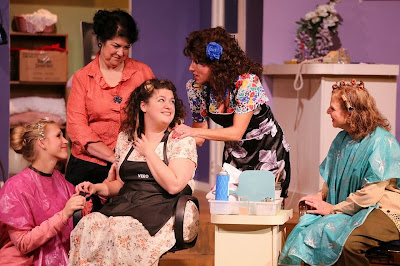 Truvy’s hair salon is the ad hoc meeting place for six diverse but intertwined women from a small Louisiana town. Set against the backdrop of their own changing lives, the friends gossip, snipe at one another, complain, and reminisce about past and present husbands and lovers, and the vicissitudes of life. The lines are fast and very funny, and we’re soon roped in by each personality in this charming group.

Things get tense when M’Lynn’s daughter, Shelby, who is about to be married, decides to have a child against the advice of her doctor,  who warns pregnancy could tip her diabetic state into mortal danger. M’Lynn is forced to walk that fine line between aching to force her daughter into common sense and fear of alienating her. Ultimately, Shelby’s choice leads to the inevitable, triggering a shattering emotional release from M’Lynn, cushioned only by the loving support of this circle of genuine, devoted friends.

The plays trappings -- set, lights, sound, costumes, props -- were all top notch, but this play is really about the acting. Fortunately, the six women in the cast were absolutely superb, right down to their comfortable Southern accents.

Stephanie Leeper artfully crafts Truvy, the big-haired, flashy, doyenne of style, into a calming, caring den mother to her shy, confused employee and her circle of customer/friends. Jessica Robins plays her timid, unmoored employee Annelle, who eventually recreates herself through religion. Dana Galagan is bitingly funny as Clairee, an older, richer, wiser voice in the fray, whose mutual sniping with her equivalent counterpart, Ouiser (pronounced “Weezer”), adroitly brought to life by Carol Richmond, hides their thinly veiled affection for one another.

Then there’s Gretchen Boyt, the beautiful, sweet Shelby, a southern belle so charming that no one can help but love her. Capping it all is Kathi Aleman as M’Lynn, Shelby’s emotionally torn mother who struggles to quell her very obvious frustration at not being able to talk sense into her free-spirited daughter.

It is Aleman who brings the most powerful performance to the table, erupting into a passionate release of anger, pain, frustration, and tears at her daughter’s demise at the climax of the play. By the time she was done, the entire audience was riveted in stunned, tearful, breath-bated emotion. Atop a play filled with great acting, hers was a performance not to be missed.

Backing up all this stellar cast was a delightfully appropriate set by Blake York and scenic artist Brie Yost, along with wonderful costumes (Michele Graves,) lighting (Matt Lawrence,) and props (Katelyn Simpson.) Jeffery Weaver did a great job on hair and wigs, critical to a play set in a hair salon, and Lynn Harper Nelson was the dialect coach who helped with their vocal realism. Sound design, by Nena Curley and director Elliot Weiner, added yet another dimension to the play. In fact, the radio on the set almost becomes another character, waking up to spew exactly the right song for the moment and mood each time one of the women bops it with a fist.

It is rare when all of a production’s elements merge so deftly to create a such a notably outstanding play, and you really should see it when it happens. Steel Magnolias is only at Tacoma Little Theatre for three weeks. Make sure you don’t miss it.