The Weir at TLT

A man walks into a bar… 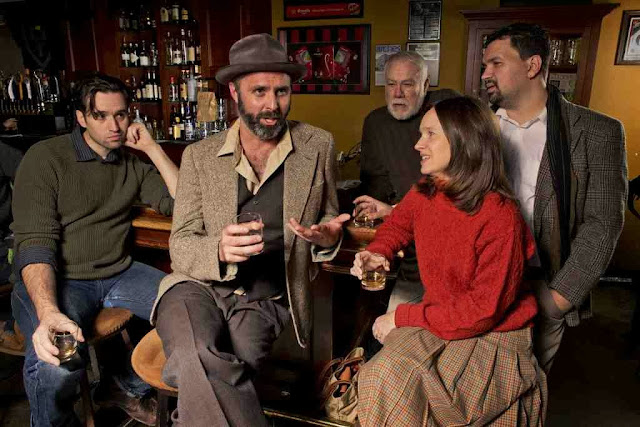 The best thing about The Weir at Tacoma Little Theatre is that there doesn't appear to be any acting in it. The cast is so good and so comfortable in their roles that instead of being aware of actors on stage, you get the feeling you've wandered, like a fly on the wall, into an Irish pub peopled with a batch of regulars. They sound and behave like familiar Irish barflies, even when their regular laconic routine is altered by one new visitor.

The barman, Brendan, adroitly and seemingly effortlessly played by Robert McConkey, hosts two of his obvious regulars. Jack (David Wright) is an older, salty character who fancies himself much more of a curmudgeon than he actually is. Jim (Brian Wayne Jansen) is a meek man, a blue collar, freelance worker cowed by life itself. They drink and engage in their normal, friendly chatter until Finbar (Gabriel McClelland), a local businessman, brings in an attractive young woman to whom he’s just rented one of his properties.

The presence of Valerie (Ellen Peters) adds a bit of sexual tension, both with the married Finbar and the three single men. She becomes the catalyst for their normal banter to give way to stories, each with some sort of supernatural twist, and each more recent in time than the last. They’re subtle, and could all possibly be explained with logic, though no one goes there.

Ellen then tells her story, one of deeply personal, very recent pain, and touched only lightly with an eerie tag. It draws real compassion from all the men, and a palpable personal connection for the whole group.

After Finbar and Jim leave, Jack opens up with his own deeply personal story of lost love and missed opportunity, exposing his feelings far more than he normally does in his favorite watering hole. You are left with the sense that they've all opened up to a degree that prevents them from ever returning to their former superficial relationships with one another, and in turn, have permanently accepted Valerie into their circle.

The play was directed by pug [sic] Bujeaud on an absolutely perfect set by Blake R. York, with props by Katelyn Simpson, set dressing and scenic art by Jen Ankrum, and lighting by Michael Christopher. It’s the quintessential Irish pub, at least as we in the states imagine it to be. Costumes by Michele Graves, lighting by Michael Christopher, and subtle sound by Gabe Hacker all added to the realism of the tableau.

I have to admit I would have liked to have seen this in a more intimate, black box setting, but they managed to pull it off superbly even in this fairly large proscenium theatre.

My one bit of advice is to get tickets early. This is a very short run and the night I was there the theatre was packed.

For another opinion, here's Alec Clayton's review of The Weir at his blog:
http://alecclayton.blogspot.com/2013/11/the-weir-at-tacoma-little-theatre.html