Fox on the Fairway at Tacoma Little Theatre

Teed off
by Michael Dresdner 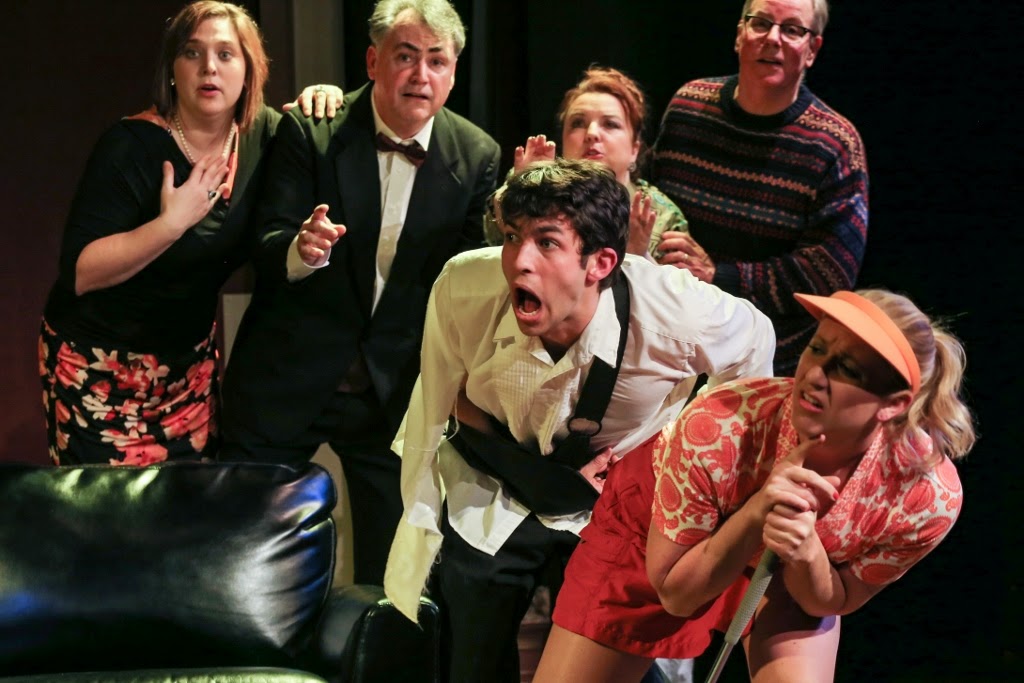 Farce, as its etymology suggests, is forced; over-the-top characters in similarly exaggerated situations. Fox on the Fairway, now at Tacoma Little Theatre, is unabashedly billed as such, and true to form, absurdity clings to both the plot and characters.

Playwright Ken Ludwig has written a lot of farces, but this time he left no cliché unturned, rehashing all of the elements that, when taken in moderation, provided welcome chuckles in his other plays. The convoluted plot is heavily larded with low-brow sexual humor, unlikely mood swings, and ridiculous clothing, all peppered liberally with excess shouting and frenetic physicality. Add a laugh track and you might be watching one of those lamentable yet inexplicably popular 80’s TV sitcoms like Three’s Company.

All the action takes place in bar at a golf country club. Rival golf club presidents Henry Bingham (Andrew Fry) and Dickie Bell (George McClure) make an excessive bet on the upcoming yearly match, each believing he has an ace in the hole. Bell’s brashness extends to his outlandish clothing, consistently misquoted phrases, and a penchant for fornication, and he goads the more upright Bingham in more ways than one.

Meanwhile, new employee and secret golf whiz kid Justin Hicks (Rodman Bolek) is in love with club factotem Louise Heindbedder (Tracy Torwick). When he’s pressed into playing the tournament, he shines, until he is emotionally derailed by a glitch in their engagement. Adding to the tumult is libidinous club VP Pamela Peabody (Stacia Russell), who has a schwarm for Henry Bingham, and Henry’s wife Muriel (Shelleigh-Mairi Ferguson) who conveniently feels the same way about Dickie Bell. After a few surprises, a lot of sturm und drang, and an excess of hideous golf outfits, everyone ends up, as is often the case in Ludwig plays, happy and heterosexually paired off.

The set by Burton K Yuen and scenic artist James Venturini, with stage dressing and props  by Jeffery Weaver, was elegantly spot on; beautiful and convincing. Intentionally outre outfits by costumer Michele Graves were both eye-catching and thoroughly appropriate. The same can be said for lighting (Pavlina Morris) and sound design (Darren Hembd.)

Say what you will about this genre and style but the audience on opening night spent an appropriate amount of time laughing it up. I suppose that’s a recommendation all by itself.

Fox on the Fairway
April 17 to May 3, 2015
Tacoma Little Theatre
http://www.tacomalittletheatre.com/