Noises Off at Lakewood

…and a plate of sardines as The Beaver.
by Michael Dresdner 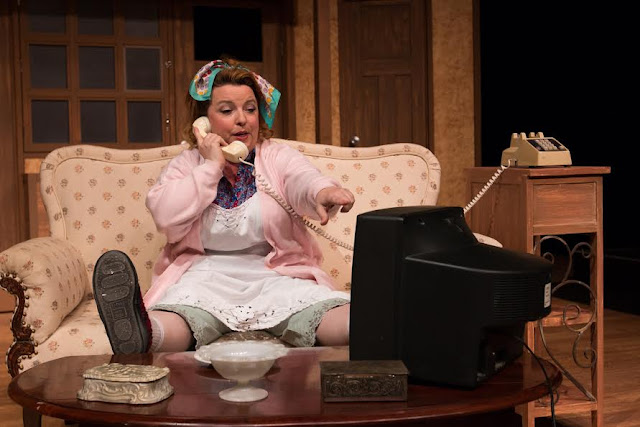 The rollicking Michael Frayn comedy Noises Off, directed by John Munn, opened last night at Lakewood Playhouse to a house filled with both patrons and laughter. There’s a good chance you know this play, since it is done very frequently by school and community theatres because it’s a fine excuse for physical comedy, scantily clad bawdiness, and over-the-top acting, three things such folk seem to adore.

The opening music (sound designer Nena Curley) is a foreshadow of the sort of entertainment you are about to see. It’s the theme from Fawlty Towers. And to cap things off, the play music ends with Liberty Bell, the theme from Monty Python. Yep, it’s that sort of comedy. 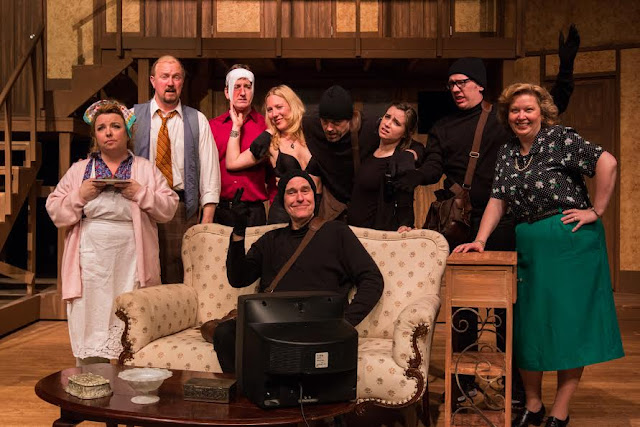 The premise, with its play-within-a-play double character list and both backstage and onstage personality quirks, is so complex that I’m likely to lose you by outlining it, but I’ll try anyway. Fortunately, it hardly matters if you catch it all, since the real hilarity comes from the manic farce that unfolds. Think of it as a three ring circus that gets progressively more inane as it melts down further in each act.

The play opens with droll and frustrated Lloyd Dallas (Jonathan Bill) trying to direct the dress rehearsal of the first act of Nothing On, a comedy that is nowhere near ready to open. Lloyd is secretly canoodling with both Brooke and assistant stage manager (ASM) Poppy.

Stage manager and all around handyman Tim Allgood (Nick Fitzgerald) also understudies several roles, and is assisted by Poppy Norton-Taylor (Ana Bury) who is far more unstrung and histrionic than real ASMs usually are.

Dotty Otley (Shelleigh-Mairi Ferguson), who has a thing for cast member Garry but plays up to Fred to generate envy, is scattered both on and offstage, unable to remember proper exits and prop handling, in particular the constant movement of a plate of sardines that probably deserves its own billing. She plays Mrs. Clackett, the housekeeper, in the play, Nothing On. 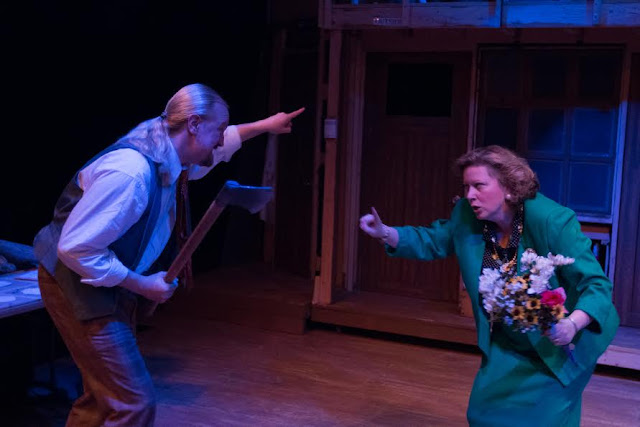 Garry Lejeune (Gary Chambers), whose name is an apt play on jejune, is inarticulate offstage, but not on, and plays Roger, a real estate agent. Brooke Ashton (Jennifer Davy) arrives with Roger playing the quick-to-undress but clueless Vicki, an amorous tax agent.

Frederick Fellowes (Jim Rogers) and Belinda Blair (Diana George) play Phillip and Flavia Brent, the husband and wife owners of the home where this all takes place. While Blair is stolid and mature one who tries to keep everything together both on and off stage, Fellowes, who also plays a sheik in the play, is timid and so unstrung that he gets constant nosebleeds from any stress. Finally, there’s an aging booze-hound of a once great actor named Selsdon Mowbray (Steve Tarry) who plays a burglar.

Got it? I thought not. 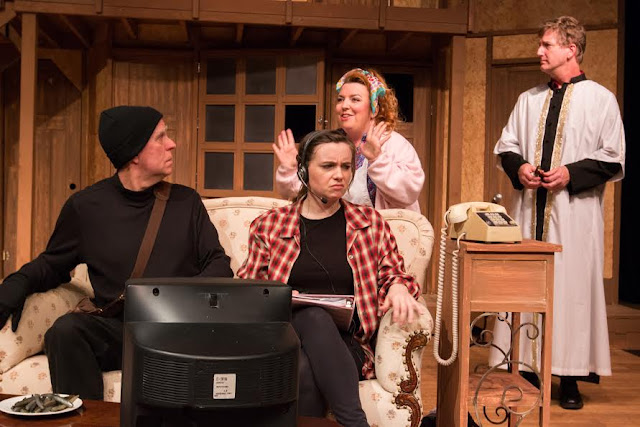 In each act we see a repeat of Act I of the play-within-a-play. First we see a not-ready-to-open dress rehearsal where we meet the quirky characters and their characters. In act two, the stage spins around and we see the same act later in its run, this time from backstage. By now, things have deteriorated and injuries, mix-ups, jealous actors sabotaging one another, and problematic sets help derail the play. Act three is from the front again, where we see the same Act I later in the run, this time so riddled with inter-actor contention and mishaps that the whole thing has devolved into a maelstrom of non-stop inanity.

In this play, the set (by Larry Hagerman and Dyan Twiner) is a critical element, since the whole thing must spin around from front to back for each successive act. It also must be two stories tall with a very functional staircase and an abundance of sturdy, slamming doors. While it worked great, its painting and appearance was definitely on the drab side for such an upscale country home. Perhaps that was intentional, to get us to ignore the set and focus on the action. Then again, perhaps not.

Props, including more sardines than you think should ever appear on stage, were nicely done by Karrie Nevin, quite appropriate costumes were by Diane Runkel, and lighting was by Brett Carr.

Like all ensemble plays, the whole cast must work together to make it all gel, and therefore all deserve the same level of praise. However, I’ll admit that my personal favorites were Steve Tarry, Jonathan Bill, Jim Rogers, and Diane George. Oh, and Nick Fitzgerald. And…, oh, forget it, go back to what I said before. It’s an ensemble cast and they all sink or swim together.

The last word? This is the epitome of what farce is all about, and one of those shows every theatre goer should see at least once and, if you actually want to catch all the action and nuance, more than once.

Noises Off
April 15 to May 8, 2016
Lakewood Playhouse
http://www.lakewoodplayhouse.org/