It's something unpredictable
by Kaitlin Dresdner and Michael Dresdner

American Idiot, the rock opera by the band Green Day, burst onto the stage at Lakewood Playhouse last night in an explosion of youthfully energetic song and dance that was both an intense and delightful experience. It was easy to be infected with their exuberance.

Director John Munn delivered a fast-paced, high energy ensemble bristling with more than enjoyable song and dance, and interspersed, as needed, with poignant emotion-laden lulls. Choreographer Ashley Roy (who also plays one of the female leads) managed to drive the young (many still in high school) cast to dance far better than one might expect.

It’s a true rock opera, as opposed to the musicals more commonly presented on this stage, in that there is very little dialogue or exposition. Except for a few diary entries, the entire story is told in song. Don’t get me wrong; it is not, mind you, a joyous story, but rather a paean to teen angst.

Largely allegorical, the story is told through the interwoven paths of three frustrated friends just out of  high school – what we’d call disaffected youth – trying to escape the suburbs into what they imagine is real life. Eventually, they all experience both love and loss, though not necessarily in that order.

Will (CoopeHarris-Turner) gets his girlfriend (Kiana Norman-Slack) pregnant and is forced to stay home, sinking into a desultory funk abetted by alcohol and pot.  Tunny (Tony Williams), seeing few options, joins the army where he is badly wounded, but in spite (or perhaps because of) his injury, he first imagines, then finds real love in the form of his nurse (Ashley Roy). Johnny (Mark Alford)  hits the big city to find hard drugs and affection with Whatsername (Dani Hobbs), but manages to blow it with drug-fueled erratic behavior.

The young cast did an admirable job with the intense, energetic material they were working with, but they particularly shined in the large ensemble numbers.

At every juncture, it is clear, via the large ensemble song and dance numbers, that the striving, angst, and life experiences of these three in fact represent multitudes of their generation. 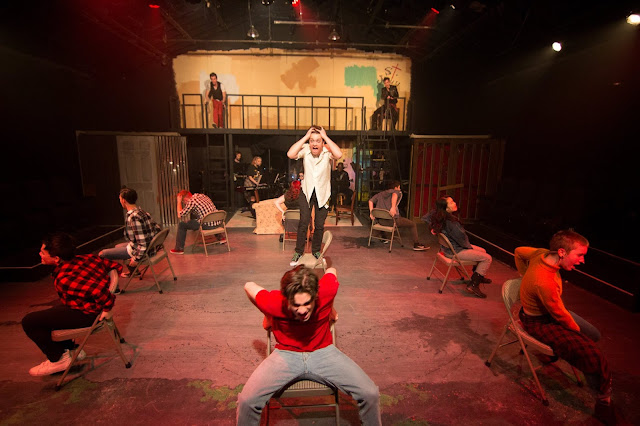 Members of that generation (and if you listened to Green Day, you know who you are), will find this show particularly poignant and nostalgic, but it is by no means accessible only to those who are familiar with their body of work. Green Day’s iconic punk-rock style is a perfect vehicle through which to explore timeless themes – frustration, hopelessness, and loneliness – and how to navigate through the marshy period between teen and adult. Even those who think they hate this style of music and wish those darned kids would just turn the volume down may find this show changes their mind.
When it comes to tech, I’ve nothing but praise to offer. The music came from an on-stage eight piece band (I know – the real Green Day was only a trio) led by Deborah-Lynn Armstrong. Fortunately, the intense and constant action on stage prevented  the presence of the orchestra from being distracting.

Costumes by Diane Runkel, and there were a lot of them, were exactly right. An exceedingly complex lighting design by Kate Wilson was executed flawlessly. The same could be said of the sound, by Aaron Mohs-Hale. The performers wore microphones, yet both the huge cast and live orchestra were balanced and clear. In fact, where the real Green Day is notorious for hard to understand lyrics, this production slowed it down just a bit, cleaned up some of the excess fuzzbox, and gave us lyrics we could clearly understand. Thank you for that.

To sum it all up, let’s borrow some lyrics from Green Day themselves:

“It's something unpredictable, but in the end it's right.
I hope you had the time of your life.”