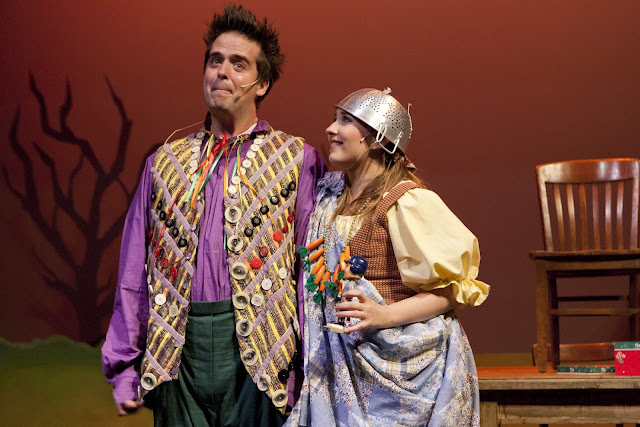 Once again, Centerstage has mounted a traditional English Pantomime, an adaptation of Cinderella which debuted in 1804 at Drury Lane Theatre in London. This version, directed by Vince Brady, has all the zany elements you’d expect of Panto, but overlaid with very modern music.

Pantomimes, or Pantos are traditionally performed at Christmas for family audiences, and this one, with lots of audience and child participation, is especially family friendly. Even the music, most of it from the past decade, is aimed at endearing the younger members of the family.

Don’t let the word Pantomime fool you. Originally a dumb show preceded by a spoken section, audiences preferred the noisy part to the silent. Consequently, it morphed into the boisterous romp it is today, but kept the misleading name.

Along with song, dance, and general buffoonery, Panto incorporates a host of common elements. There are always inside jokes, topical and local references, a fairy godmother with unusual powers, and mild sexual innuendo, usually targeted to tickle the adults but go over the heads of the children. And there’s cross dressing; at least one man is played by a young woman costumed to show off her very female attributes, while one or more men dress as female hags.

But most of all, there is audience participation. Audiences cheer heroes, who enter stage right, and boo villains, who enter stage left, loudly warn cast members of trouble, point out which way someone went, and get into arguments with characters (Oh, no you can’t/ Oh, yes I can.) This one has all of that, plus sing-alongs and on stage tasks for volunteer children pulled from the audience, all of whom get rewards for helping out.

An absolutely delightful fairy godmother (Rosalie Hilburn) introduces the play while forcing the audience to join into what will become non-stop vocal interaction. She breaks the ice by sweetly ordering everyone to cheer for her whenever she enters the stage, and repeats her entrance until you get it right. Once caught up in the interactive mood, it’s easy to keep it going.

Cinderella (Erin Herrick) is the sweet songstress you’d expect, but hangs with a clownish friend, Buttons (Erik Gratton) who secretly, and fruitlessly, pines for her. Don’t worry; he eventually finds a girlfriend (Lissa Bak) who sings as well as her rival. 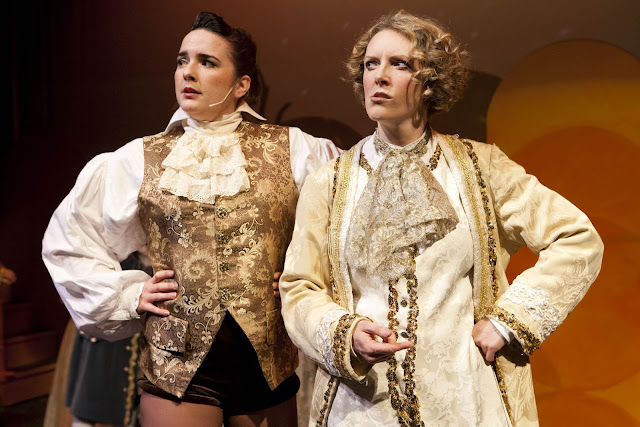 Both Cinderella’s object of affection, Prince Charming (Hilary Heinz Luthi) and “his” sidekick/body guard Dandini (Alex Blouin) are played by women in drag, both showing plenty of leg and dancing up a storm. On the distaff side, played by men in drag, are the very funny and genuinely ugly stepsisters, Kourtney (Roger Curtis) and Khloe (artistic director Alan Bryce.) Baron Hardup (Sam Barker) is Cinderella’s oafish and henpecked father, and they’re all amplified by seven more ensemble cast members who, like the leads, sing, dance and play a variety of roles.

Music is a big part of Panto, and as usual, it was adroitly led by Musical Director David Duvall on keyboards with Andrew Carson on guitar, Larry Leggett on bass, and Troy Lund on percussion. As I said, the music in this one is modern, borrowing songs from Michael Buble, Katy Perry, Taylor Swift, Adele and Avril Levigne, and Lady Gaga plus a few chestnuts we old timers will recognize.

For me, the musical highlight was “If I Were Not In Panto Land,” a successive telescoping song. The first actor sings a verse accompanied by hand and body motions illustrating it. The next joins in and sings a new verse, with new motions, and so on down the line. By the end, there’s a long line of actors singing and miming verses simultaneously to the same tune with movements all flawlessly synchronized to interact with one another. It’s hard to describe, but a true delight to watch.

There’s plenty of energetic dance, choreographed by Amy Johnson, a wide range of bright and sometimes silly costumes by Ron Leamon (with wigs by Johnni Whitby), and the usual great sound and lighting design by Amy Silvera. Set designer Sarah Sugarbaker went with very simple and unobtrusive moveable backgrounds, but the one standout was an amazingly elaborate carriage by Stephen Moody that must have eaten up the bulk of the set budget. It was pulled by two actors in a horse costume, another Panto convention.

To be honest, the show I saw on opening night suffered from common first-audience problems and delays. As we say in theatre, it needed a lot of air squeezed out of it, and it ran longer that I felt it should have. As that’s not uncommon for opening night, and typically goes away quickly, odds are very good that the version you see will be crisper and shorter.

Again, make sure you bring the whole family to this one. There were plenty of kids in the audience, even very young ones, and I watched them for their reaction. They were thoroughly entertained, fully involved, and were clearly having a great time.

For another take on Cinderella, read Alec Clayton's review at: http://alecclayton.blogspot.com/2012/12/cinderella-rocks-centerstage.html