Miracle on 34th Street at TLT 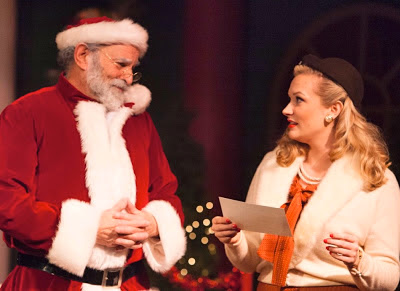 A Believable Miracle
by Michael Dresdner

The stage version of Miracle on 34th Street now playing at Tacoma Little Theatre is a sterling example of how impressive theatre can be when all the elements click. A large, solid cast directed by Casi Wilkerson, very creative lighting, delightful music, a wealth of fine costumes, and an absolutely mind-blowing set combine to make this charming Christmas story of trust and imagination a worthwhile investment for the season.

I’m sure everyone has seen at least one of the movie versions of this classic so heavily aired this time of year. The play is fairly close to the movie, so I’ll keep the synopsis brief.

Kris Kringle, who claims to be the real Santa Claus, is hired to replace a drunken Santa by Macy’s’ event coordinator Doris, a pragmatic single mom with a cynical young daughter, Susan. Kris wins over customers and bosses, has a run in with a stuffy personnel wonk named Sawyer, and gets himself committed to a mental hospital. With help from Doris’ love-struck neighbor, a lawyer, Kris must get himself released, fulfill some promises, get the lawyer and Doris together, and convince Susan he’s the real deal, all before Christmas. (Yes, he does.) 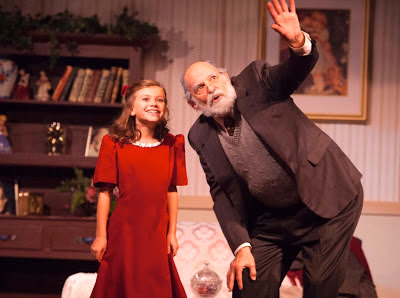 Throughout the huge and admirable cast are some wonderful portrayals, starting with the leads. Elliot Weiner is both charming and fitting as Kris Kringle. Gabe McClelland brings the perfect touch and convincing manner to lawyer Fred Gayley, who lives next door to, and has a schwarm for, Doris. Elena Easley is a solid and likeable Doris, but as good as she is, she is sometimes outshined by her perky factotum, Shellhammer, played superbly by Jefri Peters. Incidentally, Jefri’s infant son appears on stage several times doing a very convincing job of being, well… an infant. Last, and certainly not least, go kudos to young Adysen Barkhurst who is both adorable and outstanding as Susan, the non-believing daughter who hides a genuine hopeful streak inside.

But it’s not just the leads who carry this. Michael Osier does an outstanding portrayal of a drunken Santa in the opening scene, then shows up later, just as convincingly, as a cigar chomping ward healer advising the presiding judge (Steve Lien) in Santa’s hearing. Perhaps my favorite portrayal, though, was Joseph Grant as the supercilious popinjay Sawyer, who tricks Kris into getting himself incarcerated.

It may be hard to believe with such a fine cast, but even they are a bit overshadowed by what I can honestly say is the best set I’ve ever seen in any community theatre production. Set designer Blake R. York, aided by props and set dresser Jeffery Weaver and set painter Brie Yost, pulled out all the stops and, taking advantage of the theater’s rotating floor, created four sets, each one so impressive and dazzling that one alone would garner accolades. There’s a snow-kissed store front street scene, an iconic Santa’s throne receiving area, a courtroom, and Doris and Susan’s apartment. In a fine choice by the director, when the floor is rotated through one scene for another we see people in each of the “unused” sets doing just what they’d be doing if it were the set in use. It was a clever and pleasant way to let the audience experience the set changes.

Excellent lighting by Niclas R. Olson, including the very clever use of some GOBOs for special effects, and delightful period era music from sound designer Joseph Kelly all added to the allure. Wrapping up the whole package were a huge array of fine costumes from Michele Graves, Diane Runkel and Marci Hagerman.

Forget the fact that this is a tired old chestnut, and forget that you’ve seen it many times on film. Indulge once more and go see Miracle on 34th Street. This version at Tacoma Little Theatre is a feel-good experience that’s sure to make your holiday much more merry, no matter what you believe in.