The Rainmaker at Lakewood Playhouse 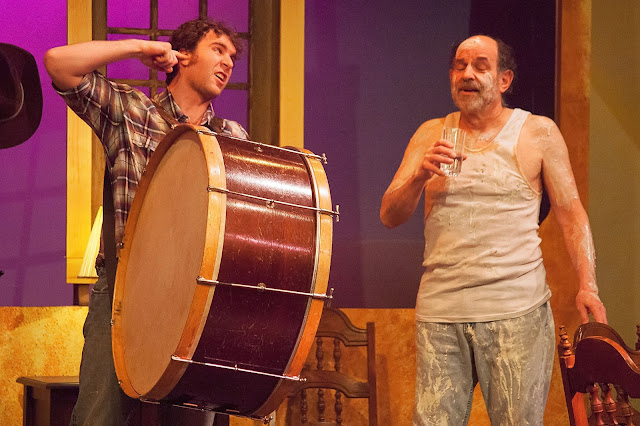 L to R: Mason Quinn, Elliot Weiner                           Photo by Dean Lapin
Lakewood Playhouse, apparently set on making us forget about how wet it is this April, has brought the arid, depression-era play The Rainmaker to its stage. This 1954 property is not to be confused with the Grisham lawyer novel/movie of the same name.

A traveling con man named Starbuck (Bruce Story) blows into a drought- crippled town and promises rain in 24 hours in exchange for $100, at the time a serious sum. Insinuating himself into a cattle-raising family, he insists they each engage in a variety of somewhat embarrassing and pointless acts. It’s part distraction and part technique to make them have skin in his game of believing, and intentionally or not, he becomes a catalyst for change.

Sparked either directly or inadvertently by his actions, those he touches overcome their fears. The untrusting learn to hope, the timid become brave, and the self-doubting learn to love, both themselves and those they yearn for but believe are out of reach.

If this sounds like a darker, less melodic version of The Music Man, you’re on the right track. (For what it is worth, The Rainmaker opened on Broadway three years before The Music Man.)

There are some exceptional performances afoot here. Elliot Weiner does a wonderfully subtle job as the father, H. C. Curry, who, after his wife’s death, became a softer, more guiding parent. He accepts and loves his children for exactly who they are, and gently tries to steer each to what he or she needs.

Elder son Noah (Jacob Tice) has taken over running the ranch, and by extension, the family. It’s a burden, but also a bulwark to support his cynical pragmatism, and an excuse to influence his siblings. Younger brother Jim (Mason Quinn), whom Noah sees as rather stupid, is instead a delightfully realistic chap who wins us over with his trusting, energetic hopefulness.

Anchoring it all is a superbly cast sister, Lizzie (Tanya Barber), who believes herself to be too plain to ever land a man, a self-doubt Noah encourages. Her catharsis is at the root of the play.

Rounding out the small cast are the very believable deputy File (Jed Slaughter), emotionally crippled by a divorce he can barely admit to himself, and his constant and stalwart Sheriff (Ernie Heller.) While Story’s Starbuck is not the spellbinder that Preston’s Harold Hill was, he does bring a dose of enthusiastic self-assurance, and does a credible turn in his seduction scene with Lizzie.

All this takes place on an beautifully clever stage designed by Judy Cullen. There are actually three sets; a house, an office, and a barn. All are hidden in plain sight when not being used, thanks in large part to excellent lighting (and dark) effects by Niclas R. Olson.

Diane Runkel does a fine job, as usual, with appropriate costumes, and sound designer John Burton adds another dimension both with accurately subtle sound effects and with superbly chosen musical interludes between the scenes. I can’t say the same about the fight scenes; the fight choreography definitely needs work, and perhaps that will improve during its run.

In the final analysis, I came away feeling that in spite of a lot of great actors and characterizations on that stage, at least as far as opening night was concerned, the whole fell short of the magic that it could be. Perhaps it will improve with age, but even in its nascent state, there’s enough to make it worth seeing.