Zoo Story, or Fear and Loathing on the Acting Trail 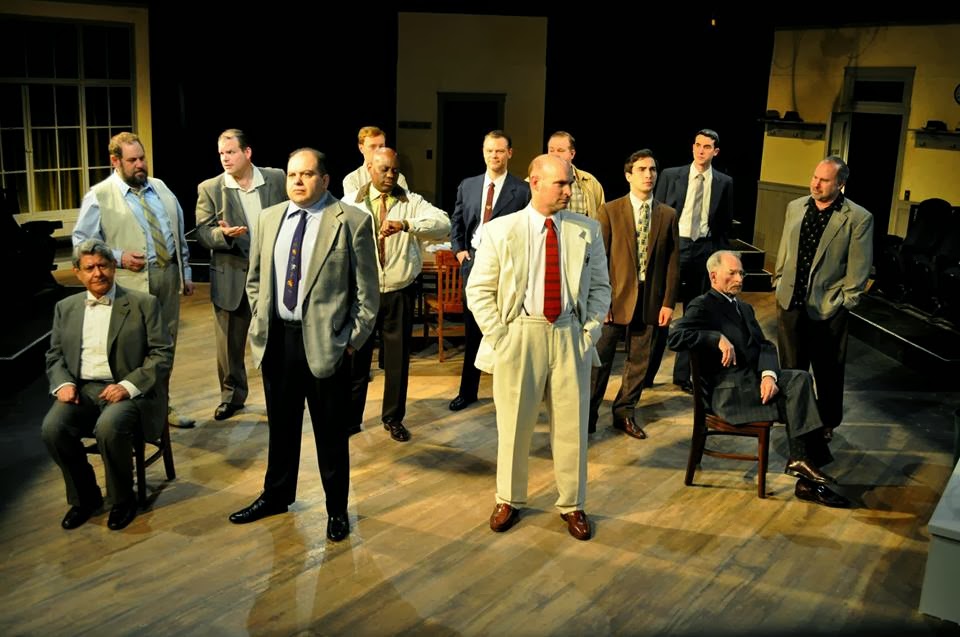 Here’s the good news/bad news, folks. I won’t be reviewing 12 Angry Men at Lakewood Playhouse (you decide whether that’s good or bad news) because I am in the cast.

Instead, I’ll supply a peek behind the testosterone curtain and reveal what it is like to be in a man-cave of this magnitude; a play with nothing but men in the cast, and thirteen of them at that.

But first, I need to deal with the fear and loathing comment.

Truth be told, the normal theatrical fear has been eliminated in this play thanks to one cast member who shall remain nameless. I’ll get to him in a minute.

By fear, I refer to every actor’s greatest dread: “going up.”  It means being on stage in front of an audience with no earthly idea what your next line is. The silence is deafening.

This is the stuff of literal nightmares for most actors. My own personal version, which I normally have at least twice with every show I do, has me in the wings, knowing my entrance is nigh, not only with no idea of my lines but no clue as to the nature of the play itself. I grab other actors and ask them “Can you at least tell me what this play is about, so I can make something up?” About that time I usually wake up and quickly remind myself that someday I’ll grow up to be a reviewer and will no longer have to suffer these night sweats.

At any rate, that can’t happen in this show. Why? Because one cast member has, remarkably, memorized THE ENTIRE PLAY and adroitly inserts the correct line whenever anyone goes up. We all love him for it, but most of us think he’s actually a flesh-toned robot, since no real human could do this. He’s like the Deep Blue of live theatre.

The best part of any all-male cast is the notable lack of backstage drama, something that varies with the composition of the cast. At the “way too much drama” end are plays heavily populated by a mixture of both sexes of hormone-infused teenage actors. Plays like that should issue seatbelts, because trust me, they’re a rocky ride, replete with the angst-ridden lovelorn forever donning sack cloth and ashes because of the fickle affections of fellow thespians.

In the middle are the normal mixed-gender plays, with their olio of mild flirting, awkward conversations, and dressing room fights over whether it’s way too hot or way too cold, who owns the makeup that eight people have now used, and whether or not you have a legal right to a particular spot at the mirror simply because you’ve adorned it with something of yours in a theatrical version of peeing on one’s territory.

This play has none of that. Instead, there’s an odd mix of helpfulness and the obligatory male, insult-laden banter, delivered with more affection than vituperation. We may be 12 Angry Men on stage, but we’re frighteningly amenable in the green room. Perhaps the contrast is part of it; several people, notably jurors #3 and #10, release plenty of rage on the boards in what must be a very cleansing ritual, and almost everyone gets to pop off at least once.

Maybe that’s the real secret behind creating good theater; balancing the natural lunacy of actors with a healthy outlet for their mishegas. (It’s a Yiddish word meaning “craziness.”) That and plenty of air freshener.

Perhaps you should take their word for it and come see for yourself. Hey, you can always come back to this blog and post your comments if you disagree too vehemently.