The Nerd at Centerstage

It’s all geek to me 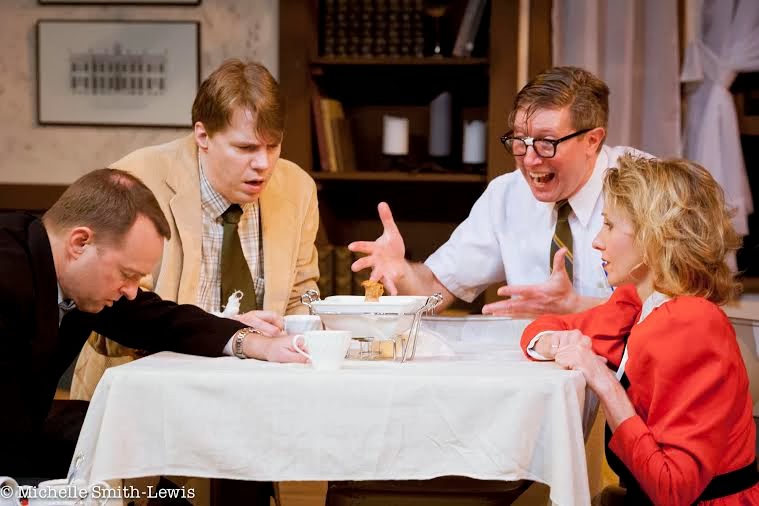 The Nerd is one of the funniest plays ever written. It’s frequently performed by local theatre groups, but rarely this well. Centerstage has put together a terrific director and an absolutely superb cast. It is laugh out loud funny, fast paced, and totally delightful, but there’s only one week left to see it.

The play was written by Larry Shue and is directed by John Dillon, who directed the first production of it. According to the program notes, he also helped convince Shue to write this tale of a nerd who comes to visit and comically upends several peoples’ lives.

Willum Cubbert, a dejected architect, is unhappy with his current job and about to lose his girlfriend, Tansy McGinnis, who wants to move east for a job as a TV weathergirl. His friend and neighbor, Axel Hammond, wants to prod Willum out of his rut, apparently by constantly peppering their three-way conversations with barbs of hilarious, snarky sarcasm.

Years before, Willum was wounded in Vietnam and his life was saved by one Rick Steadman, who disappeared before Willum awoke in the hospital. A grateful Willum wrote to the elusive hero telling him he’d do anything for him at any time.  When Rick eventually shows up, he turns out to be a loud, hilariously annoying, clueless doofus. Homeless, Rick moves in, and in short order his antics drive everyone to distraction, ultimately causing Willum to do something rash and life-changing.

The play needs the perfect actor to play the nerd, and David Gehrman is it. With pants pulled up to his chest, a pocket protector in his shirt, and glasses repaired with adhesive tape over the bridge, his rubber-faced expressions, loud braying voice, gawky posturing, and absurdly illogical actions were both hilarious and cringe-worthy. He makes the audience roar while making life hell for the grateful but hapless Willum (Brandon Brown) and the sweet, patient Tansy (Jenny Vaughn Hall). Adding spice to the mix is Axel, played with delicious acidity by Chip Wood, who comes off like a youngish Tony Randall blessed with the wickedly well-timed humor of Paul Lynde.

Then there’s David Natale as Warnock Waldgrave, Willum’s boorish, bombastic hotel-building client, and his obnoxious son Thor (Shane Collins). Dealing with both, largely by breaking dishes, is his angst-ridden wife, Clelia, played by Elinor Gunn, who with her very first line made us laugh out loud and love her at the same time.

The set, by Michael Ward, was spacious and spot on, as were the props by Trista Duval. Outstanding  period and character-defining costumes by Rachel Wilke were wonderful. Added support came from lighting designer Amy Silveria and sound, including lovely between-set songs, from Johanna Melamed.

By the way, be sure to read the director’s notes in the playbill. They are very illuminating.

As I said, there’s not much time left to see this production of The Nerd at Centerstage, and you’ll be hard-pressed to find a smoother, funnier iteration of this gem anywhere.