To Kill a Mockingbird at TLT

The Children’s Crusade
by Michael Dresdner 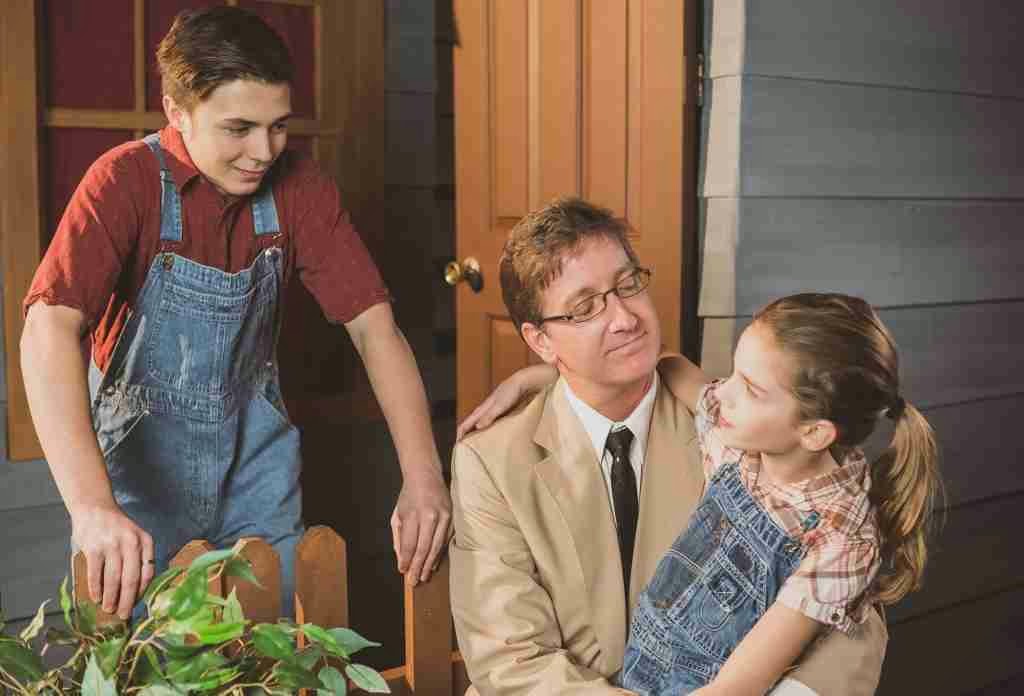 There’s an adage in theatre; avoid sharing the stage with dogs or children, as they are sure to steal the audience. Tacoma Little Theatre’s production of the classic play To Kill a Mockingbird proves just that with three young performers grabbing the limelight, not with banal cuteness, but with bona fide acting chops. With several outstanding adult performances adding to the mix, this is a play worth watching.

Set in 1935 in Maycomb, Alabama, Harper Lee’s Pulitzer Prize-winning story of bigotry and its antithesis, personified by a town full of people who are often both more and less than they appear to be, is told through the eyes of a young girl named Jean Louise “Scout” Finch. She, her brother Jeremy “Jem” Finch, and neighbor Charles Barker “Dill” Harris (a character based on Lee’s real life childhood neighbor and friend Truman Capote) spend their time enjoying a bucolic youth and speculating on the reclusive and mysterious Arthur “Boo” Radley.

Turmoil rears its head when her single father, lawyer Atticus Finch, is asked to defend a local black man accused of beating and raping a trashy white woman named Mayella Ewell. The charge is leveled by her worthless, arrogant father, Bob Ewell. Atticus must stand alone against intense bigotry in this segregated town, and ends up humiliating the Ewells in court. Despite his valiant efforts, his hapless and clearly innocent client is convicted, then killed by a racist mob.

Scout, Jem, and Dill try to make sense of it all, aided by Atticus’ understated wisdom but often challenged by the almost universal racism of the rest of the town. When a drunk and angry Bob Ewell attacks Jem and Scout as they return from a school pageant, they are saved by a silent, shadowy giant who kills Ewell before carrying an unconscious Jem home. Scout is surprised to find their savior is the painfully shy “Boo” Radley. Atticus and sheriff Heck Tate must then figure out how to balance honesty with morality in resolving the dilemma of how to deal with this heroic murder.

In Lee’s original book, a grown up Scout recounts the events that deeply affected her and her values. The play version by Christopher Sergel, directed here by Jennifer Niehaus-Rivers and Martin J. Mackenzie, replaces the adult Scout’s reminiscing with a neighbor who provides the exposition. While Heidi Walworth-Horn was excellent as the neighbor/narrator Maudie Atkinson, I prefer the original concept of a story told in recollection by Scout. In addition, while the book and movie transition fluidly through vignettes that create the backstory, the play scenes are more disjointed, especially in the first act, robbing the story of some of its energy. 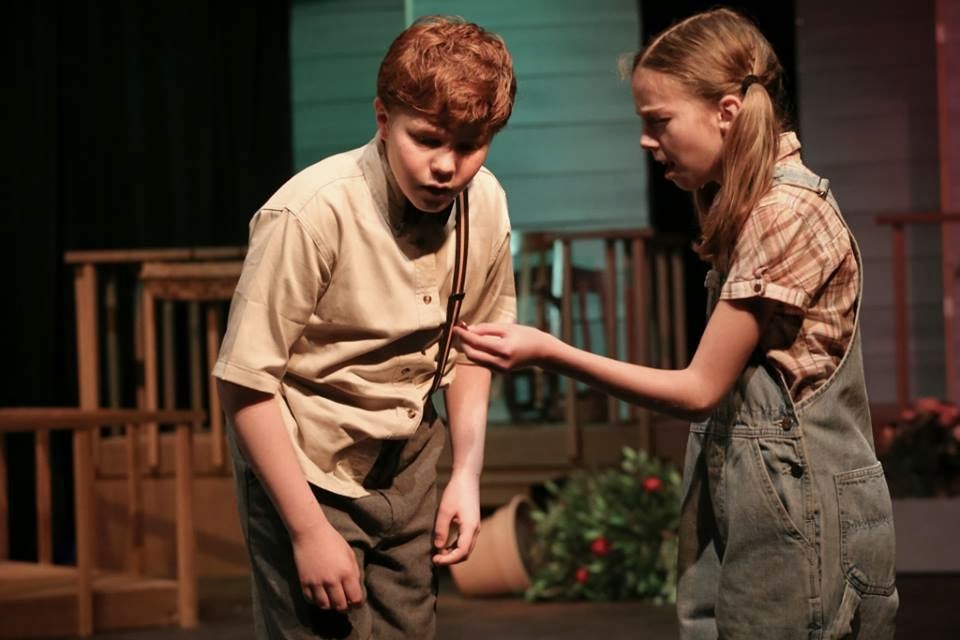 When it came to the acting, youth led the way. The children playing Jem (Gunnar Johnson) and Dill (Austin Kuetgens Brooks) were flat-out excellent, but the jewel of the crown was Liberty Evans-Agnew in the lead role of Scout. Beyond great stage presence, which all three exhibited, Evans-Agnew clearly “got” who Scout was, and presented the disarmingly appealing character clearly, accurately, and charmingly.

Also endearing were a delightfully cranky Wanda Moats as the aged, infirm neighbor Mrs. Dubose, and an actor who is obviously also a talented singer, Marion Read, playing a convincing Calpurnia.

Speaking of women, Zenaida Smith’s portrayal of the duplicitous, cowed Mayella Ewell was chillingly good, creating a deeply moving character from a role that could easily have devolved into a shallow stereotype in the hands of a lesser actor. For that matter, the same could be said about Mitch Burrow portraying her father, Bob Ewell, who was real enough to be frightening.

Some of the other supporting roles were worth a respectful nod as well, like Travis Barnett covering both Boo and Nathan Radley, Frank Tompson as a quite realistic Judge Taylor, Noah Nieves Driver as the timorous but indignant Tom Robinson, and Kerry Bringman as the curiously unbigoted sheriff Heck Tate.

To be truthful, there were weaknesses in the production. Based strictly on opening night, I’d say a good bit of air can be squeezed out of it. Erratic and sometimes slow pacing caused it to lose some of the dramatic energy it deserves and needs. Even Jim Rogers’ noble and reserved Atticus came off rather pallid and unsure, also contributing to the play’s inconsistent energy. Fortunately, these things frequently affect opening nights, so I expect they will clean themselves up in later performances as the actors become more sure of themselves and their lines.

A rather complex set by Blake R. York worked surprisingly well, aided by moving furniture and props by Katelyn Simpson, and lighting by Pavlina Morris. Unobtrusive music and sound by Darren Hembd helped subtly set the time and scene, as did costumes by Michelle Graves. Dialect coach Syra Beth Puett also deserves an offstage nod for successfully injecting a plausible southern accent into a gaggle of Pacific Northwest actors.

Weaknesses aside, it’s a powerful and moving play with enough top-notch acting to help you easily overlook its challenges, and even those are likely to evaporate by the second weekend of its run. In short, I’d suggest you put To Kill a Mockingbird at Tacoma Little Theatre on your “well worth your time” list.

To Kill a Mockingbird
Jan. 24 to Feb. 9, 2014
Little Theatre
www.tacomalittletheatre.com

Posted by Dresdner's Theatre Reviews at 6:24 AM