A fledgling flier
by Michael Dresdner 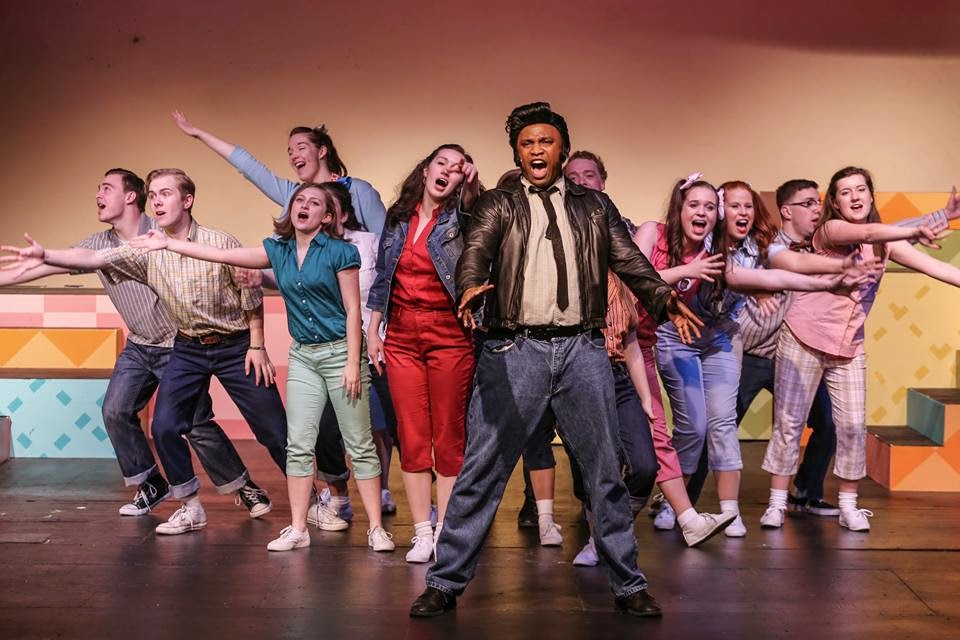 It’s a play often done by high school thespians, perhaps because the bulk of the ensemble chorus is made up of a whole lot of teenagers, and perhaps because high school audiences are willing to accept a performance that is more charming than polished. This production is definitely charming.

Just in case you were not around back then, Elvis Presley, at the height of his career, got drafted into the Army in 1957, and that was the trigger for crafting this musical comedy.

Teen heartthrob Conrad Birdie (DuWayne Andrews, Jr.) gets drafted, so his woeful, songwriting, mama’s-boy of a manager, Albert Peterson (Steve Barnett), aided by his long-suffering and adoring assistant, Rose Alvarez (Ashley Ortenzo), decides to capitalize on it. Choosing an adoring fan club member at random, they decide Conrad will bestow one last kiss on Kim MacAfee (Melissa Maricich) of classically suburban Sweet Apple, Ohio. She’s just been pinned by her boyfriend, Hugo Peabody (Steven Wells) and this upcoming kiss, to be aired on the Ed Sullivan show nation-wide, throws her, her new steady, and all her many friends into a chattering quandary.

Eventually, everything works out and returns to normal, but not before plenty of other comic scenarios play out. Albert strives to cut the apron strings with his overbearing, passive –aggressive, mother/business partner Mae Peterson (Diane Lee Bozzo), a character based on every comic’s favorite Jewish mother persona. Rose tries to get Albert to profess his long suppressed love for her, leave the impresario business, and follow his dream of being an English teacher. Kim’s father, Harry MacAfee (Jeffery Weaver), bemoans the state of today’s teens while Conrad, like a hip-swinging pied piper, lures the town’s teens into a night of partying, a conceit to allow yet another flashy song-and-dance production number. Meanwhile, Kim takes a step toward maturity while recognizing, with Rose’s help, just how problematic men are as potential mates.

Sometimes secondary characters burst out with performances that overshadow their leads, and that happens here. Gloria Rasputin (Shelleigh Ferguson) is a distraction brought to Albert by his mother, but her over-the-top introduction dance number was an absolute show-stopper and unquestionably the high point of this entire production. Harvey Johnson (Chris Campbell), a bit part in the telephone scene, shines at being exactly what he’s supposed to be, a dorky nerd who stands out by being remarkable at being unremarkable. The Mayor’s wife (Aya Hashiguchi), a “blink and you’ll miss it” role, did a fine turn as the easily shocked fainting matron.

That’s not to say the primary characters did not have their strengths and high points. To name just a few, Maricich’s Kim was thoroughly convincing as a fifteen-year-old playing at budding maturity. Anderson, as Conrad Birdie, did a solid job of singing and fancy footwork, but I wish he’d been given costumes worthy of his very impressive dancing and moves. Weaver as Harry MacAfee was delightfully middle American, especially when he was photo-bombing his way onto the Ed Sullivan Show. As for the mothers, Ms. Bozzo did a fine turn as Albert’s mother Mae, and Carrie Sleeper Bowers was solid as the stalwart and even-handed Doris MacAfee.

Overall, the large ensemble song and dance numbers worked best, and the younger actors who made up the bulk of them were, to an individual, quite good at singing, dancing, and convincing teen characterizations. In some of the smaller group numbers, what should have been tight three and four part harmonies often came up short, but all the large ensemble song and dance numbers were always solid and enjoyable. A good example is the impressive telephone scene, where the teens, aided by excellent lighting design (by Pavlina Morris) and a set composed of various levels and sizes of brightly patterned blocks (by Blake York), form a phone tree to discuss the fact that Kim is going steady.

Sadly, the set, which worked so well for the telephone number, did not do much for the other scenes. Costumes (Michele Graves) were reliably period, though lacking the flash that often accompanies broad comedies like this one. Terry O’Hara was both the musical director and the very solid keyboard presence leading an otherwise passable quartet. Props (Karrie Nevin) were unobtrusively appropriate, which is a good thing, and choreographer Elizabeth Richmond Posluns, who certainly had her work cut out for her, did an outstanding job of pulling together such a large and diversely talented set of cast feet.

When all is said and done, Bye Bye Birdie at Tacoma Little Theatre offers a chance to indulge in a rose-colored review of 1958 by watching the solid singing and dancing of a group born long after that era had passed. With luck, this pleasant bit of mid-century nostalgia will provide a welcome vacation from the reality of today, and at least for older patrons, may take you back to a fondly remembered period in history.

Posted by Dresdner's Theatre Reviews at 10:51 AM