Moonlight and Magnolias at TLT 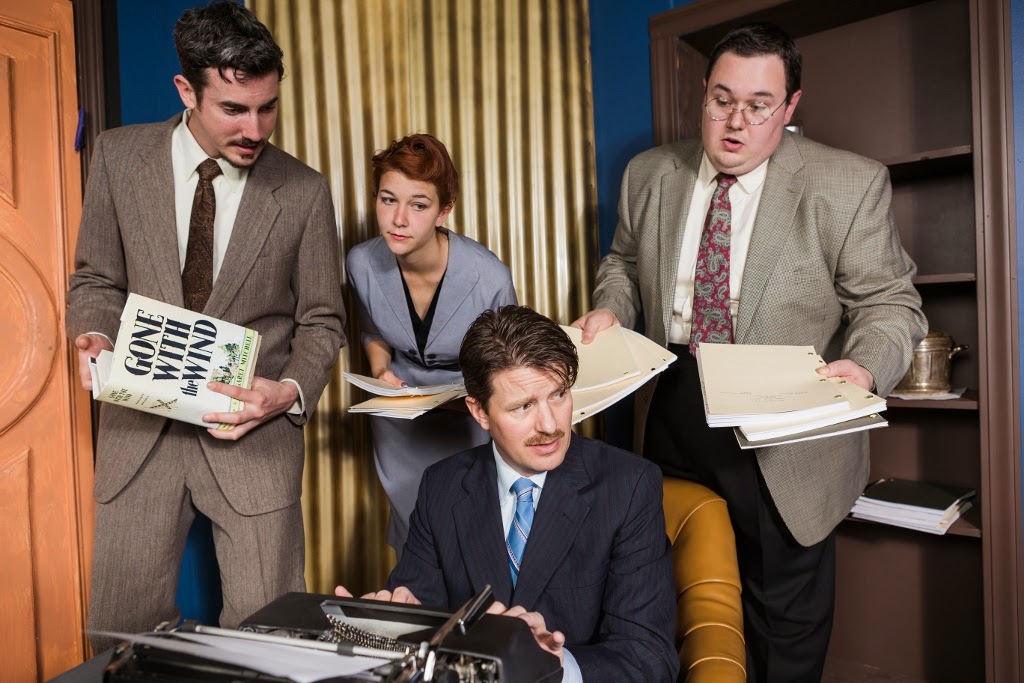 Moonlight and Magnolias is considered a second stage production at Tacoma Little Theatre, which means that it opens tonight and closes in only nine days. That’s a shame, since there’s obviously been a whole lot of love, talent, energy, and creativity poured into it, and the result is well worth your time. To get a jump on things, I went to the preview last night.

The conceit of the play, supposedly based on a real event, is that producer David O. Selznick, in the midst of making the film Gone With the Wind, has fired his writer and director and instead brought screenwriter Ben Hecht and director Victor Fleming to his office. He bullies them into being locked in his office for five days with nothing but bananas and peanuts to eat in order to, in that short time, write a credible screen play for the stalled movie.

To make matters worse, Hecht has not even read the book, so the other two men decide to act it out for him, scene by scene, while he types up dialog. Their intentionally cheesy acting, especially when the two men play the roles of Scarlett and her maid Prissy, creates easily the funniest scenes in the play.

As they get more exhausted and tense from endless coddling, arguing, bombast, sniping, and yes, bouts of humor, they eventually emerge with a script, and the rest is history. All in all, the direction by Pavlina Morris is well-paced and realistic, and the acting very solid.

At the low end of the office food chain is Selznick’s secretary, Miss Poppenghul, played to a fare-thee-well by Katelyn Hoffman. Her costume, posture, demeanor, and responses are all spot on and perfectly create the iconic 1930s secretary, from the top of her disciplined red hair to her appropriate stacked-heel shoes. I can’t imagine anyone doing it better.

Tedd Saint-James ably plays the put-upon playwright Ben Hecht as skeptical, largely unconvinced, and torn between the words of the book, about which he seems to care little, and his own ethical imperatives. One can almost imagine a voice from beyond chiding “silly rabbit; you want movies to be ethical teaching tools?”

Jacob Tice covers the role of director Victor Fleming with his usual energy, style, humor, and hair-trigger emotional responses. Tice is an excellent actor who routinely makes the most of whatever the script has to offer him, as he does here.

Doing the bulk of the heavy lifting as David O. Selznick is Blake R. York. The past few years have seen him mostly designing and creating sets for the theatre, but in this play he emerges onstage to remind us that, though we may think of him as a behind-the-scenes artist, he is first and foremost an absolutely terrific actor. York inhabits his character convincingly. No, I don’t know what the real Selznick was like, but it hardly matters; this one is certainly real enough.

Speaking of sets, this same Blake R. York designed and built the set as well, and it’s amazing. It boasts a completely convincing, high-end Hollywood office of the period, replete with grand symmetry, Art Deco styling, shiny leather diamond-tufted couch and matching chair, and the obligatory commanding desk and window. Amplified by Jen Ankrum’s very capable painting skills, the set alone is worth going to see.

However, in spite of grand acting and directing, a flawless set and costumes, and all the rest, the property itself gets in its own way. While this is not what you would call a fluff piece, it is nevertheless a light, or less than significant, work. To quote the Scottish play, it is “…full of sound and fury, signifying nothing.”

Granted, the play raises high emotions with repeated cycles of angst-ridden philosophical arguments about “the Jewish question,” the reason for movies to exist, and the opinion that the ultimate control is in the hands of hoi polloi who buy tickets. However, none of these high-minded discussions are resolved; there’s no grand conclusion or moment of discovery. By the end, you may emerge a bit worn out from the emotions, but you won’t have gone through any significant catharsis that changes your views on life, the universe, or anything.

Fortunately, none of that is required for a night of good theatre. Come see it for what it does offer; an interesting insight into the movie making process, a fine cast and crew, and a compelling swirl of drama and comedy. But remember, Moonlight and Magnolias runs only this week and next, so don’t wait or you’ll miss it all.

Posted by Dresdner's Theatre Reviews at 10:37 AM