The Tigger factor
by Michael Dresdner 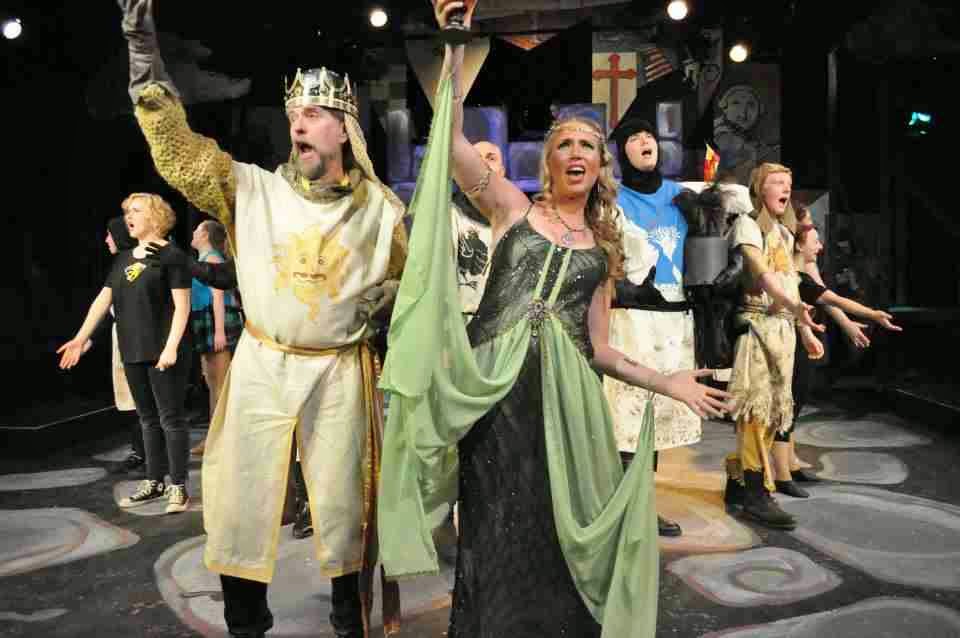 Tiggers? No, the energetic cast of Spamalot at Lakewood Playhouse.

Perhaps the biggest tipoff to how much you’ll enjoy this maelstrom of comedy is the fact that the cast seems to be having just as much fun creating it as the audience has trying to drink it all in.

In case you weren’t aware, Spamalot is a stage musical adapted from the movie Monty Python and the Holy Grail, and is pure Monty Python at its best. If you don’t know what that is, imagine a group of unrestrained, picaresque comics bedecked in a stream of ridiculous costumes and toting outré props launching pell-mell into irreverent and silly songs and dances while using the background of Arthurian legend to skewer every sacred cow they can find, all while dancing on the very precipice of political incorrectness. It’s what vaudeville wishes it could be.

I suppose at this point I could tell you the storyline, but to be honest, worrying about the somewhat elusive plot is like asking how many beans it took to make your morning latte. It just doesn’t matter.

For instance, the introduction has a narrator talking about England, after which the troupe, in Scandinavian garb, launches into a lively, comical song and dance about Finland while slapping one another with fish. This inanity is halted when the narrator clarifies “…England, not Finland” and they all slink away. See what I mean?

What does matter is that a large and energetic cast under the obviously capable (and enthusiastic) direction of John Munn did an excellent job of bringing this joyful insanity to life. There are too many actors to mention, and most handled several roles very adroitly. I will call out Coleman Hagerman, the rubber-faced, Gumby-limbed, half human/half Muppet whose creation of the character Patsy was so spot-on and outstanding that I found myself always focused on him when he was onstage.

He was hardly the only shining light, though. Timothy McFarlan as Sir Robin (and others), Xander Layden as Sir Lancelot (and others), Gary J. Chambers as Sir Glalahad (and others), Steve Tarry’s King Arthur, Kyle Sinclair as the Historian, Gretchen Boyd, Brandon Ehrenheim, and the entire male and female ensemble all shone in their turns. And let’s not forget the tech support people, Dylan Twiner, Stephanie Huber, and Kara Zink, dressed in backstage black, who not only hustled a myriad of props and set pieces, but also controlled the obvious “special effects” and even joined in the ensemble for some of the bigger numbers. 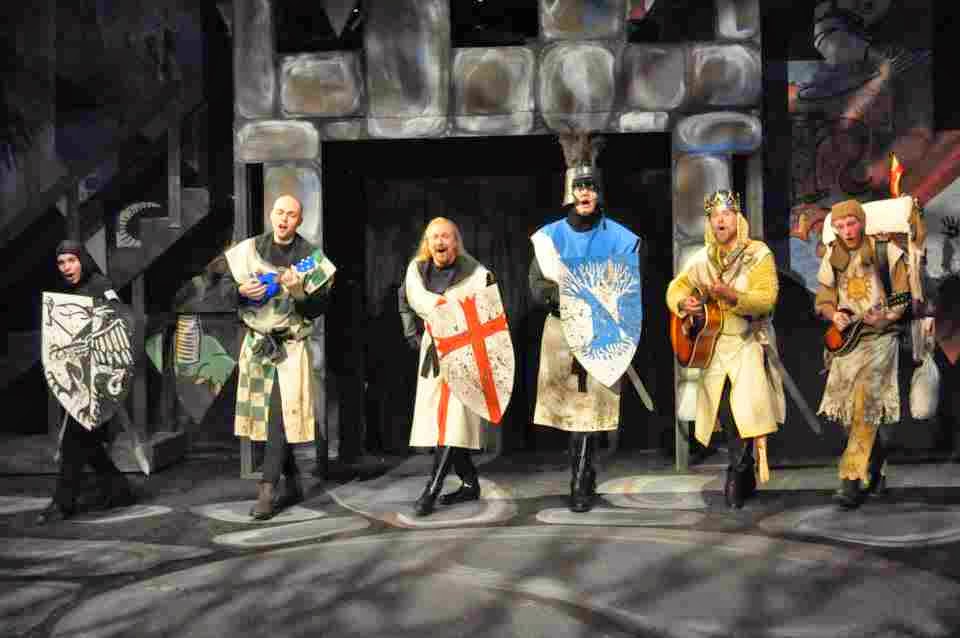 With this sort of production, the unseen are as important as those on stage, and the support group was well worth a pile of kudos. Music director Deborah Lynn Armstrong and her excellent pit orchestra, choreographer Cassie Wilkerson, who managed to make the admittedly less than professional dancers look good, scenic designer Lex Gernon , and costume designer Diane Runkel, who, like Corky St. Clair of Waiting for Guffman, created miracles out of a non-existent budget, all deserve high praise.

I suppose I could whine about the few weaknesses, like singing that was just north of karaoke, but like the coffee beans, it just doesn’t matter. What does matter is that this cast and crew are offering you one thoroughly delightful and very funny evening of non-stop tomfoolery, and you’d be a fool not to take advantage of it.

Posted by Dresdner's Theatre Reviews at 11:52 AM