An outsider’s view
by Michael Dresdner 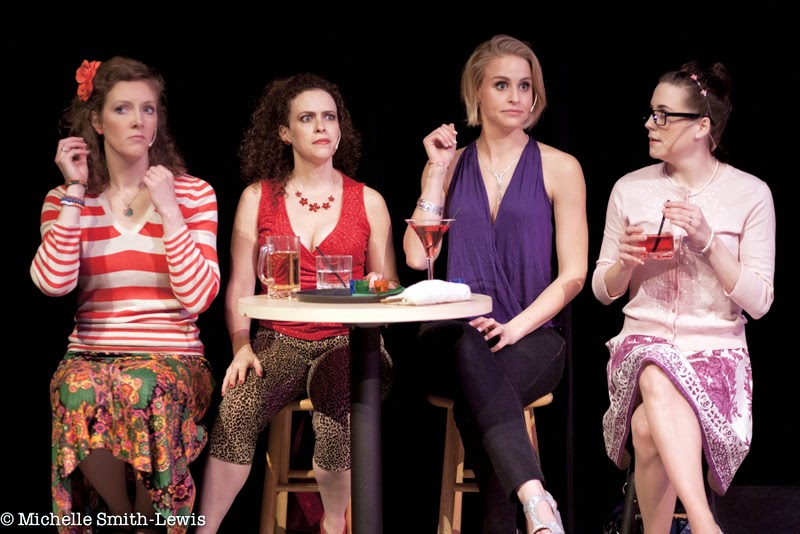 Let me say at the outset that I am not the target audience for Girls Night: The Musical, now playing at Centerstage. It appears to be aimed at the past 40, unerringly heterosexual female, preferably one who has been married (at least once), had children, and imagines herself wilder and raunchier than she really is.

As I am a retirement age male, please feel free to intone “but it’s not MEANT for YOU” after any unflattering or uncomprehending comment I might utter. With that out of the way, we can dive in.

Neither a play or a true musical, Girls Night is collection of loosely strung together song and dance numbers. There’s no real plot or arc and little in the way of cohesive flow.

Set in a karaoke bar, the conceit is that four longtime friends get together to drink, get down and dirty, and remind one another of their checkered past and patchy present. The official occasion is the engagement of the fifth friend’s daughter. We don’t meet the daughter, but missing mom, who died in a motorbike accident at the age of 17 and keeps watch as an angel, narrates and adds needed exposition.

The women, engaging in almost non-stop singing and dancing, are decidedly better than the property they are working with. They are all quite good, in spite of being cast as rather unrealistic, two-dimensional stereotypes. 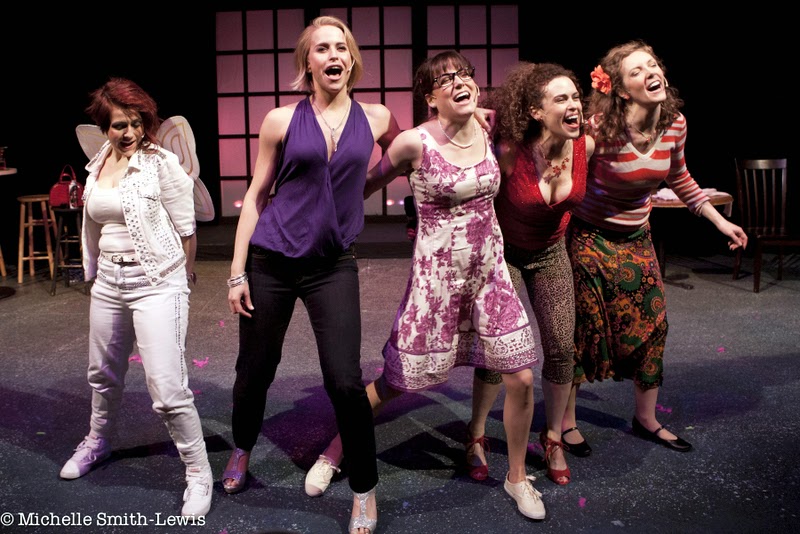 Alicia Mendez plays Sharon, the aforementioned dead-at-seventeen, not-so-guardian angel trying to join in the fun, if only vicariously. Her job is to stitch together the otherwise unconnected chunks of energetic song and dance.

Statuesque and clear-voiced Anna Marie Clausen creates Liza, the snarky, athletic, well-heeled presentation wife brimming with self-confidence. I’m sure I’m not the first to compare her (favorably) to Cameron Diaz.

Then there’s Anita (Hilary Heinz Luthi) who functions normally only thanks to mood controlling drugs, a matured version of the sweet but dippy paste-eater we all remember from grade school. Luthi reinforced Anita’s essential lack of cool with a lanky, puppet-like style of dancing and movement that was quite endearing.

Carol (Meg McLynn) is an overtly sexual, decidedly raunchy character whose clothes clearly blare “slut.”  She dances hard, sings harder in what some call “belter” style, and vaguely reminds one of a 40-year-old Bette Midler with untamed hair.

My easy favorite among the five was Kate Alden as (coincidentally) Kate, a married school teacher – make that schoolmarm – who was always well-behaved but plain, and except for cutting loose at this karaoke night, still is. Alden managed to maintain the overlay of her somewhat gawky character even while singing and dancing vastly better than her mousy persona had any right to be capable of doing. She then clinched it in the second half (there are no acts here) delivering an entirely delightful drunk Kate, something that is difficult to do convincingly. She did it all marvelously.

Both the musical director, Amy Jones, and the choreographer, Leslie McQueen, deserve props for the flow and energy, while costume designer Karl Ruckdeschel did a nice job of identifying the various personalities definitively by their outfits.

And what of the property itself? Let me just say that it’s a far cry from the cleverly crafted and smoothly integrated barbs of, say, a Tina Fey or Amy Sedaris. The humor was more like a series of giggly, dirty Facebook memes, often dabbling in penis, merkin, and other sexual themes. Like most memes, they were generally familiar, a bit ham-handed, and easy to see coming. If I were downright cruel, I might call the writing vacuous. Luckily, I’m not.

At the core of this production are song and dance numbers mostly fitting into the karaoke genre; songs with more elan than relevance. At times it seemed the dialog existed more to cue a song than the other way around. The women on stage did their all to extend the energy to the crowd, encouraging everyone to get up and dance in the aisles along with them, but it was much more fun watching them.

Unfortunately, some of the song choices have been forever tainted by their popular culture connections. It is hard to hear “Don’t Cry Out Loud” without seeing the anorexic beauty queen from Drop Dead Gorgeous, and impossible to avoid images of The Birdcage during “We Are Family.”

Come to think of it, this whole play would have been more compelling done at The Birdcage, since drag queens are easier to swallow as female stereotypes. Perhaps next time.

Again, this was aimed not at me but at the mostly female audience. They seemed to be having a good time and relating to the genre, so take that for what it’s worth. I’ve done my best to paint an accurate picture. Perhaps the best thing is to see it for yourself and either agree or disagree.

Posted by Dresdner's Theatre Reviews at 8:50 AM