Half past midnight in the afternoon 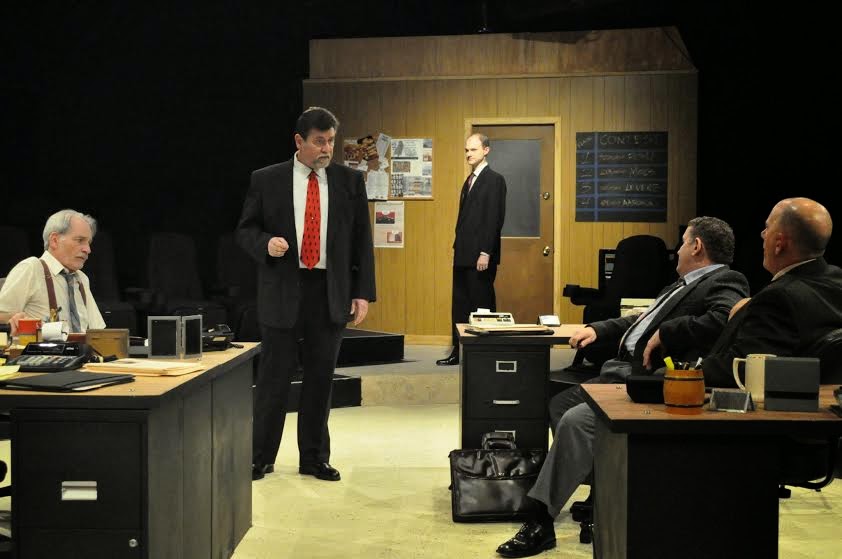 Lakewood Playhouse, under the tutelage of John Munn, who also directed this play, is presenting David Mamet’s Glengarry Glen Ross as this season’s “out of the box” offering, their term for shows that are more challenging to audiences. Yes, it’s risky, for a number of reasons, but it’s also a play that won both a Pulitzer and a Tony, so it’s got pedigree.

Most of the action is set in an office of men selling real estate for investment purposes to hoi polloi dazzled by dreams of greed, a practice once derogatorily termed “swamp busting.” The set by James Venturini is spot on accurate, dressed with beyond-perfect props and amazingly sweet details by Jeffery Weaver. Costumes are right on the money, as they always are when done by Alex Lewington. 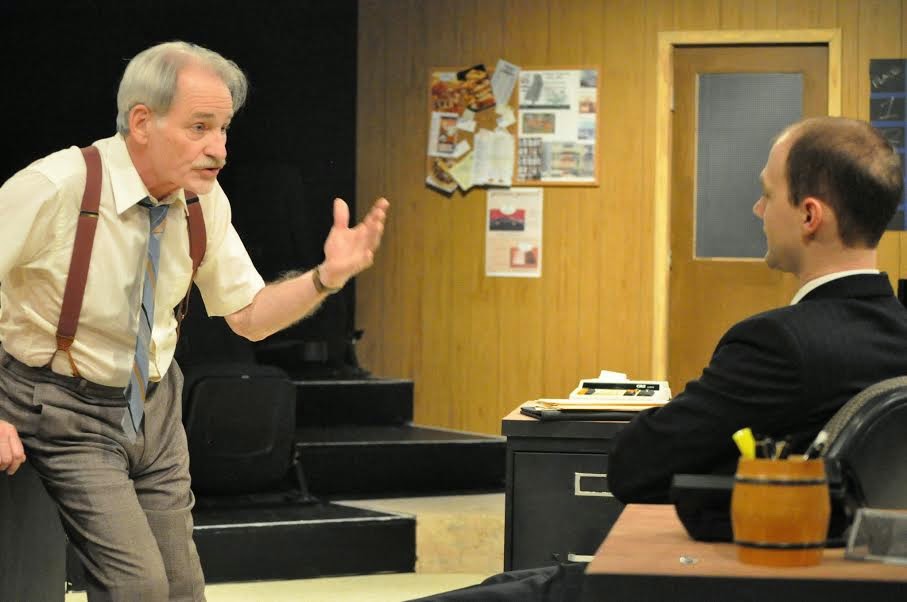 The main denizens of the office are the office manager, a nepotism-placed ferret named John Williamson (Kyle Sinclair) and four salesmen. W. Scott Pinkston does an outstanding job of creating  Richard Roma, the slick, self-confident predator currently at the top of the sales heap. Similarly, Joseph Grant is excellent as Shelly Levene, once a powerhouse salesman now reduced to desperation, trapped in a job that has squeezed him out like a used lemon, but forlornly trying to prove he’s still got it. 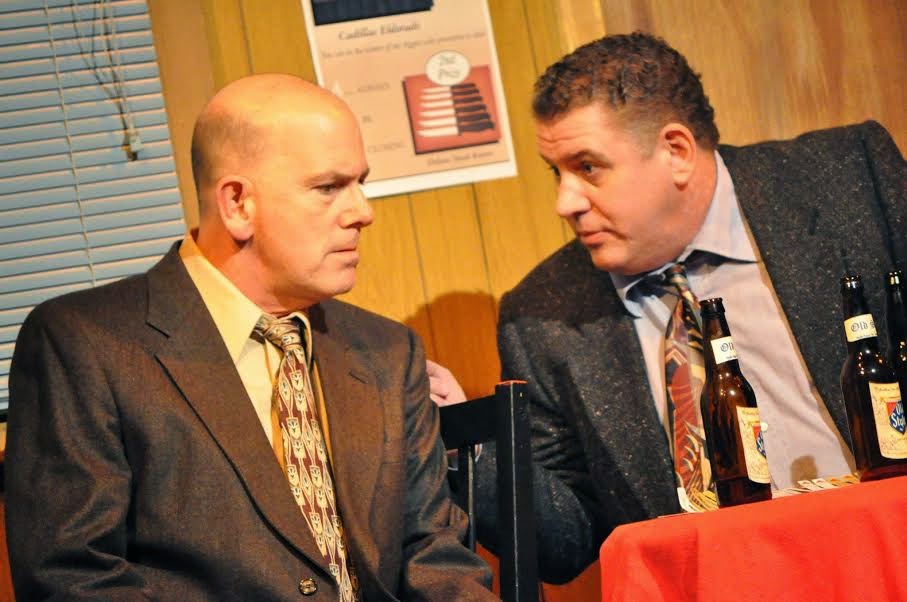 Dave Moss (Alan Wilkie) is a crude, conniving man, easily driven to the unethical, but cagy enough to protect himself by roping others into his nefarious schemes. George Aaronow (James Winkler) is the nebbish of the office, a plodder who is perhaps more aware than anyone else of how much he hates his job, and for good reason. 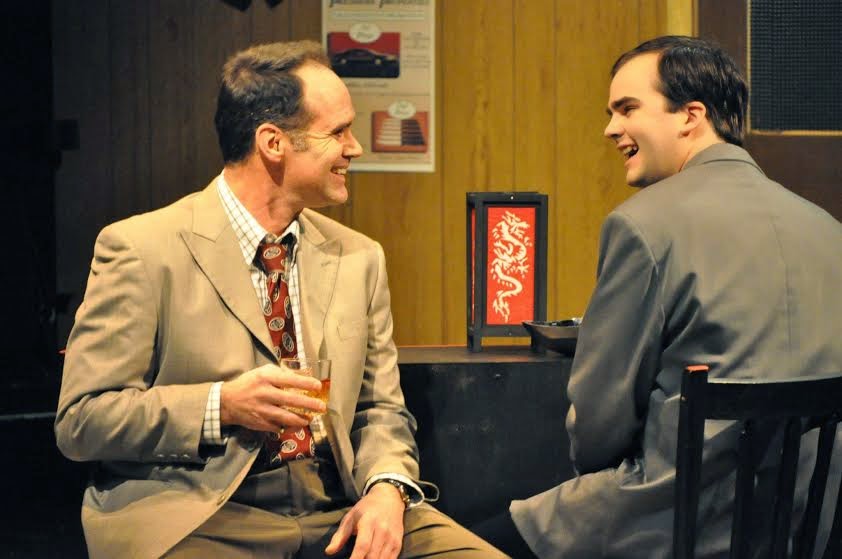 Theirs is soul-sucking work where the brief exhilaration from landing a sale barely makes a dent in the constant degradation of what they do; sell land for more than it’s worth to people who don’t want it and often can’t afford it. The stink of stress and self-hatred clings to an activity where the only job satisfaction is money. Not surprisingly, they’ve come to despise their customers, more marks than clients; each other, because of the competition; and ultimately, themselves.

Rounding out the cast are short but well-delivered appearances by Blake (Mike Slease), a successful and arrogant bully from the head office there to apply pressure and pit the salesmen against one another, James Lingk (Frank Roberts), a timorous, hen-pecked client with buyer’s remorse, and a refreshingly calm and focused cop named Baylen (Dave Hall.)

It’s a strong cast, top to bottom, the proof of which came from a comment by my co-reviewer. She said she just kept looking at Joe Grant (who plays the furtive, pathetic Shelly Levene) and thinking “there must be something else you could do to make a living.”

Here’s a nugget I rarely share: Just past my second decade I was pressed to work in a “swamp busting” office somewhat like this one. My horrified reaction to it went a long way to convincing me to spend my life, as I in fact did, as a guitarmaker.

For those of us who abhor such characters and endeavors, and there are many in the community theatre circle, it’s hard to imagine leaving the theatre any way but depressed. Of course, that may well be the point. Mamet is showing us the dark reality of one particularly ugly facet of the working world, and to be fair, that is one of the jobs theatre is supposed to do.

And what of the famed “bad language” the play is noted for; all the “fucks” and related verbal coarseness? Do men – and it is only men in this office and this play – who are locked in a soul-numbing job in which they scorn their customers and hate one another almost as much as themselves actually talk this way? Yes, Virginia, they really do.

Granted, there are patrons who would ask “But is that really necessary?” That’s the wrong question. One should ask “is it really appropriate?” and the answer to that is “yes, that level of realism is very appropriate,” and frankly, that’s what makes it necessary, if theatre is to be honest.

Now for the big question one must always ask after a night of theatre: Did I enjoy the experience?

But that’s not because it wasn’t well done (it was), or because it was a bad property in the sense of it being a poorly written play (it isn’t). It was because it opens a doorway into a piece of reality that I’d rather not immerse myself in for two hours.

As they say, your results may vary; it might be just the thing your psyche needs.