Everything… is beautiful.
by Michael Dresdner 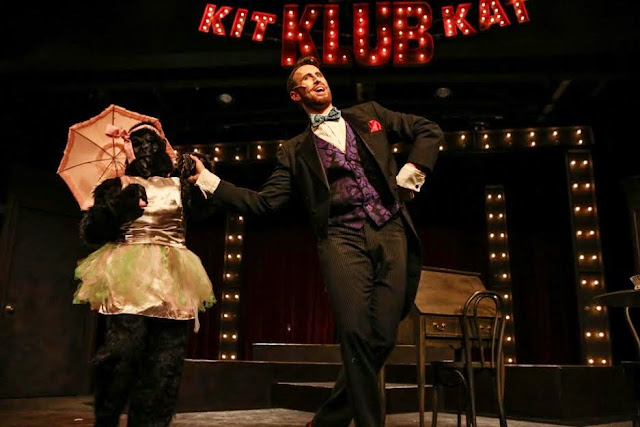 For their last major show of the season, Tacoma Little Theatre has pulled out all the stops to mount an absolutely magnificent production of the musical Cabaret. With brilliant directing by John Munn and jaw-dropping performances by what can only be called the perfect cast, a packed house watched an opening night presentation so flawless you’d swear they’d been doing it for weeks. I’ll bet once the word gets out, tickets will be rare as hen’s teeth, and that’s just as it should be.

From the very second Mauro Bozzo steps out onstage and opens the show as the Emcee, he grabs the audience in the palm of his hand and never lets go. Looking glorious, his singing, acting, and movement is pure perfection, his oversized personality reaching everywhere like the tentacles of an octopus. You can’t ignore him, and you can’t avoid loving him as he gets under your skin and drags you into the seedy reality of his haunt, The Kit Kat Klub. It’s Berlin’s hottest nightclub in all possible definitions of the word, where every iteration of hedonism is indulged, its patrons largely oblivious to the dark shadow of Nazism creeping through the rest of 1931 Germany. 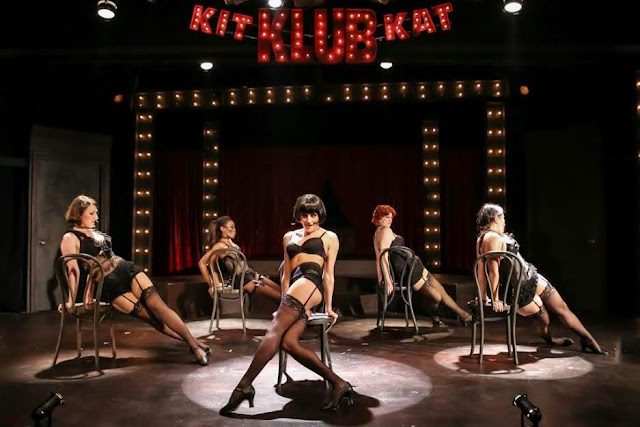 L to R: Amanda Jackson, LaNita Hudson, Elise Campello, KathyKluska, Haley Kim
Backing him up are the no less amazing Kit Kat girls (Amanda Jackson, LaNita Hudson, Haley Kim, Kathy Kluska), whose stunning singing, dancing, posing, and gyrations go beyond hot, beyond sexy, and deep into titillatingly lewd. With terrific voices, downright athleletic dancing, and barely-there costumes they provide the supremely talented flesh in this fleshpot of a night spot that sets the stage for all that follows.

What follows is a group of interwoven tales of diverse denizens trying to cope. Clifford (Niclas R. Olson) is an aspiring writer from Pennsylvania, naïve and sweet, with an equally sweet singing voice. He’s soon befriended by two very different characters. First there’s Ernst (Kyle Sinclair), an affable and outgoing smuggler willing to adapt to the changing political tide like one changes his shirt, as long as it is to his advantage. 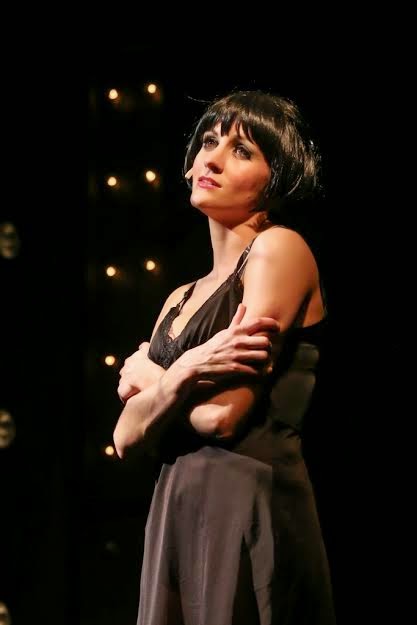 Then there’s Sally Bowles (Elise Campello) the gorgeous, talented, singing and dancing headliner of the Kit Kat Klub, who pushes Clifford’s comfort zone by moving into his flat and offering more than just friendship. Campello creates a Bowles who is sizzling hot on stage and yearningly needy off; a soul adrift seeking sex and admiration to buoy her. 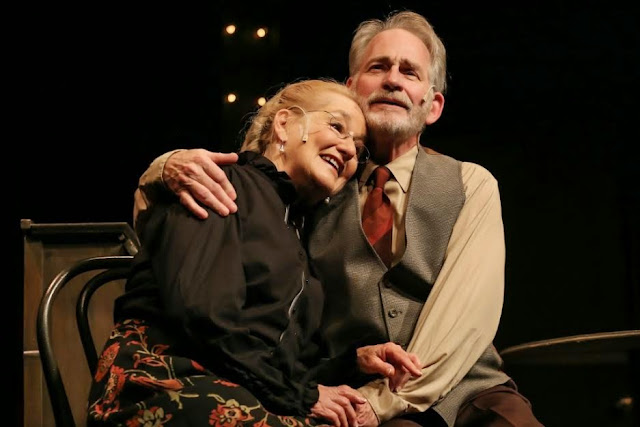 L to R: Rosalie Hilburn, Joseph Grant
Their digs are owned by landlady Fraulein Schneider (Rosalie Hilburn), who along with her adoring suitor, Herr Schultz (Joseph Grant), make absolutely the sweetest old couple imaginable. But like so many human relations in this dark time and place, they, too, will be affected by the hot Nazi breath on their necks. Rounding out the tenants is Fraulein Kost (Rachel Fitzgerald), a sassy, delightful, and completely endearing prostitute who, shall we say, patriotically gives her all to the Navy. 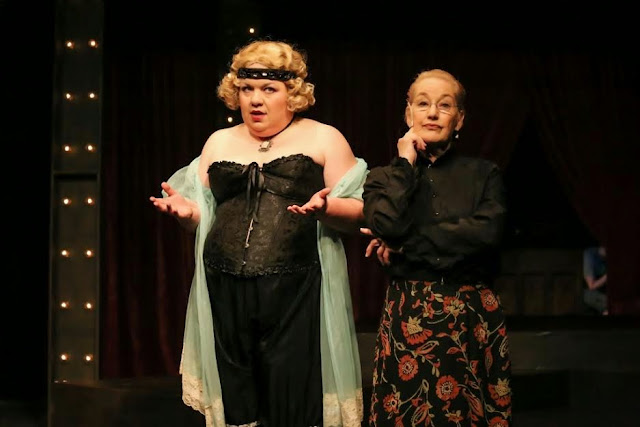 The rest of the cast (Stephen Nishida, Addison Daniels, Derek Wisher, Jeremy Thompson, Charlie Stevens) play a variety of roles, all expertly executed. To a person, this is an amazing ensemble of triple threat actors, with more than admirable singing, dancing, and acting chops to their credit.

John Munn’s directing choices are also brilliant; variously chilling, extravagant, sizzling, and heartfelt. The final stunningly powerful scenes in both the first and second acts will take your breath away.
This is a Kandor and Ebb musical, so of course the songs are beautiful, meaningful, and elucidating. Musical director Pamela Merritt Caldwell also leads the excellent onstage Klub band consisting of Robbie Marx, Keely Freudenstein, Tommy Hawthorne, Benjamin Marx, and even Mauro Bozzo, when he’s not onstage as Emcee.

Credit for the amazing choreography, which deserves a bow all by itself, goes to Lexi Barnett. Both the wonderful set and sound design are thanks to Blake R. York, with props, set dressing, and wigs by Jeffery Weaver. Lighting design is by Niclas R. Olson (Clifford in the cast) and a superb array of dazzlingly perfect costumes comes from designer Michele Graves. And for such a flawless opening night, we need to get stage manager Bethany Bevier and assistant Abby Lund to also take a bow, even though these jobs usually hide in the background.

As part of a “Director’s Exchange Program” to reinforce the cohesiveness of the theatre community, Munn, the artistic director of Lakewood Playhouse, swapped places with TLT’s artistic director Chris Serface. While Munn directed Cabaret here, Serface is directing The Mystery of Edwin Drood, which opens next week at Lakewood.

There you have it; an amazing musical perfomed by a devastatingly talented cast and backed up with equally top notch production values. You’d be an utter fool to miss this show.