The Mystery of Edwin Drood at Lakewood 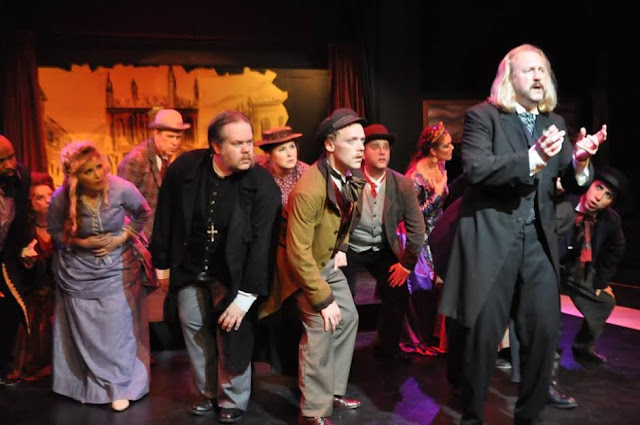 At the outset, you need to know that The Mystery of Edwin Drood , the final show at Lakewood Playhouse this season, is not, as its name would imply, a dark, Dickensian piece, or even, for that matter, much of a murder mystery. It’s a campy, boisterous romp of a musical with elements of vaudeville, Gilbert and Sullivan operatic melodrama, English Panto, and old style music hall.

For instance, there’s a lead male played by a female (touted as a renowned “male impersonator”), a set of “identical twins” of different genders who could not possibly look less alike, and magnificent flashy costumes, all of which are common Panto elements. There’s a classic vaudeville “set” consisting of word play insults, a thousand-word-per-minute song a la Gilbert and Sullivan, and lots of music hall flummery.

In other words, it’s jolly, exuberant, in-your-face gaiety with a completely crumbled fourth wall. That’s right; expect the cast to talk to you, beg your participation, and all but climb into your lap in an effort to get the audience to be part of the show.

The basic conceit is a play within a play; the regulars of The Music Hall Royale are going to put on a murder mystery, so all the diverse and wacky characters who populate the venue will try to put aside their competition, squabbling, and insults for long enough to mount a semi-serious play. Obviously, that’s doomed to comic failure. Oh, they manage to eke out a bit of the story in between scene stealing, ego trips, and unrestrained song and dance, but when they come to the unfinished part of the story, they ask the audience to vote on who the killer is and who should play the various roles needed to finish the performance. 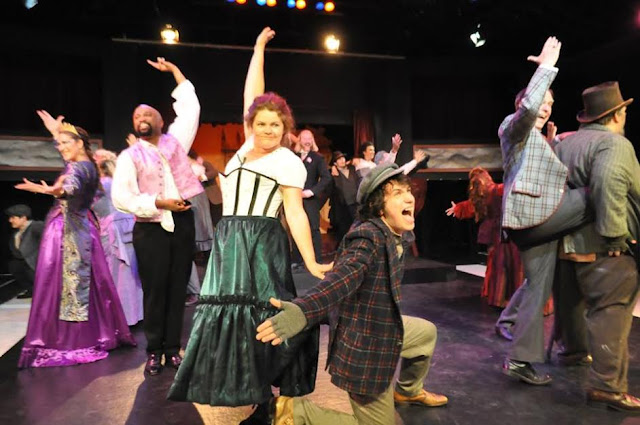 Before I get into individuals, let me say that the entire cast is excellent, though too big to name them all. All the ensemble singing and dancing was top notch, and the exuberant dance hall girls particularly compelling. The music hall troupe launched into their numbers with the eagerness of a tumble of puppies being let out into a dog park whenever they got their cue, and sometimes (intentionally) before. Ditto for the acting, and though there are too many for me to name them all, I will say that the entire cast deserves kudos before I indulge myself and call out a few of my favorites.

First and foremost there’s Steve Tarry, who plays the role of The Chairman of the Music Hall Royale, the chief fourth wall violator. Smooth, glib, and funny, with the perfect demeanor and a snarky mien, he blithely insults both audience and fellow troupe members with his slick, non-stop patter. He is the quintessential music hall emcee, and does such a bang-up job of the role that it’s hard to imagine anyone else ever doing it as well.

There are solid leads who play characters who, in turn, play other characters in the play-within-a-play. They include Gary Chambers as John Jaspers, Allyson Jacobs-Lake as Rosa Bud, and Brynn Garrett as Edwin Drood.

However, some of the color roles were so enchanting they caught my eye and my heart. Christopher S. Cantrell plays an absolutely delightful reprobate and sot named Durdles, while his other persona does a perfect vaudeville-style insults-with-word-play routine with Tarry in his emcee role. Jed Slaughter is wonderfully understated as the reserved Reverend Chrisparkle, while Derek Hall is charmingly pitiable as Phillip Bax, who desperately wants some day to be cast in a lead. 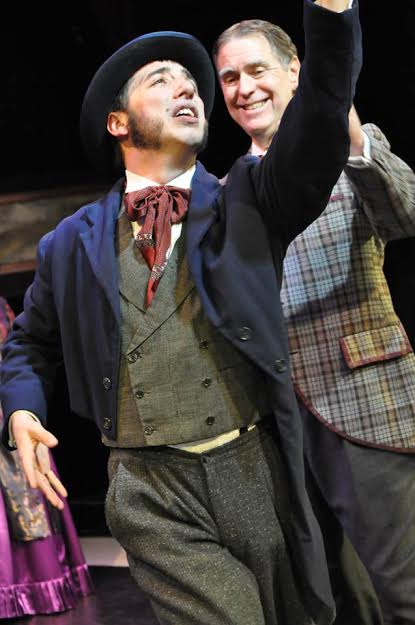 Shelleigh-Mairi Ferguson did a hilarious turn full of innuendo and bawdy charm as Miss Angel Prysock (who then plays Princess Puffer.) DuWayne Andrews Jr, and Heather Malroy play the thoroughly unlikely set of  “identical” twins from Ceylon. Since no one in the cast or audience is supposed to know what someone hailing from that part of the world is really like, they are free to endow their characters with clueless absurdity. He tended toward the lead in The King and I, and she reminded me of Princess Caraboo, with her self-described comic accent of “unidentifiable geography” and the constant gyrations of a Balinese dancer.

And the production values? Amazing. Costumes too good to be believed were, not surprisingly, thanks to the redoubtable Alex Lewington. A superb orchestra was led by Deborah Lynn Armstrong and paired with excellent choreography by Heather Malroy. Lighting by Jerry Clausen and sound by Nena Curley (who is also the stage manager) blended beautifully. Lex Gernon’s elaborate set included an entire theater view with wings, curtained proscenium, audience boxes, and a stage that slid to and fro.

Incidentally, this production, directed by Chris Serface, the artistic director of Tacoma Little Theatre, is the other half of the director swap between him and John Munn, who directed Cabaret at TLT.

Here’s what you need to take away from this: Forget the title, and forget that it is (very loosely) based on an unfinished but typically grim Dickens tale. Go expecting a no holds barred, flashy, high-spirited musical comedy with more than enough audience participation and you won’t be disappointed.