A light meal of airline fare
by Michael Dresdner 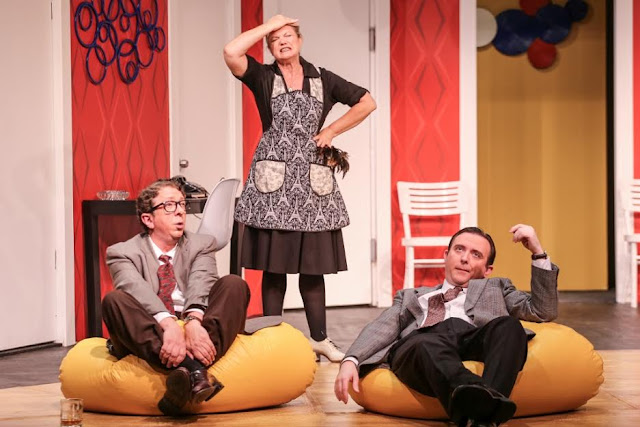 Tacoma Little Theatre opened its 97th season last night with an early 1960’s bit of dated dating fluff called Boeing Boeing. The “parental warning” sign by the box office gives you a great heads up as to the tenor of what’s about to happen on stage. It warns that you are about to see “suggestive situations, doors slamming, and pancakes with ketchup.”

If you are looking for nuanced emotion, political correctness, or intellectual challenge, keep moving; there’s nothing for you here. What is here is heaps of rather well done physical comedy and suggestive lustiness; frenetic kissing and hugging, pratfalls, walking into slamming doors, near misses, and men whomped with purses. All this unfolds with the dynamic range, subtlety, and sensitivity of Benny Hill, replete with on-stage grappling, implied (but never seen) sex, and even the titillation of accidental homoerotic posturing.

This rather formulaic sixties tale introduces us to Bernard (Greg Lucas,) an American bachelor in his Paris apartment, and his housekeeper Berthe (Brynne Garman), who outline the setup. With Berthe’s help, Bernard is juggling three air hostesses (no, they never use the word stewardesses) whose schedules keep them from meeting or finding out that he is engaged to all three. Of course, he has no intention of marrying any of them; it’s the sixties, people, and he’s a cool Playboy type. 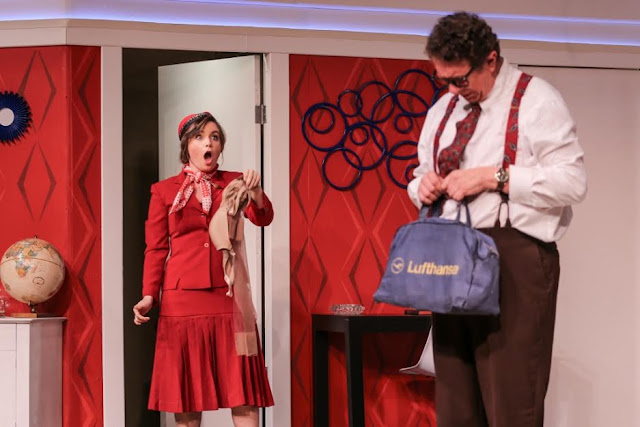 Gloria (Ana Bury) is an American working for TWA, Gabriella (Holly Rose) is an Italian flying for Alitalia, and Gretchen (Jana Guek) is a German with Lufthansa. Get it? All the names start with G so he can even monogram gifts and robes without the fear of slip ups. As each shows up in turn, he turns the large spinning portrait so her photo adorns the room. The recessed crown molding lighting also changes to match the color of each woman’s uniform. Yes, the play boasts that level of contrivance. 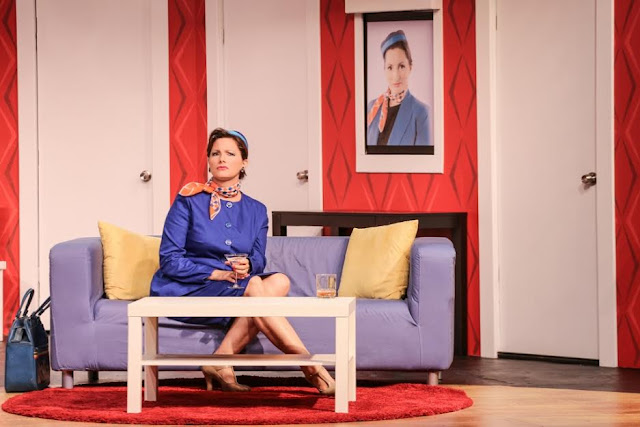 But wait; you know this can’t last, right? Of course not. Bernard’s old friend Robert (Robert Alan Barnett) comes to visit just as the schedules of the three hostesses get rearranged. Yes, they all show up more or less at the same time (I bet you didn’t see that coming) and it falls to Robert to somehow keep the juggled balls in the air. That’s the basis for the endless funny lines, comic set-ups, and outrageous falls, leaps, and blocks, and the very talented and very entertaining Robert shoulders the bulk of it. I won’t tell you how it all resolves except to say that it maintains its utter impracticality in order to have a happy ending. 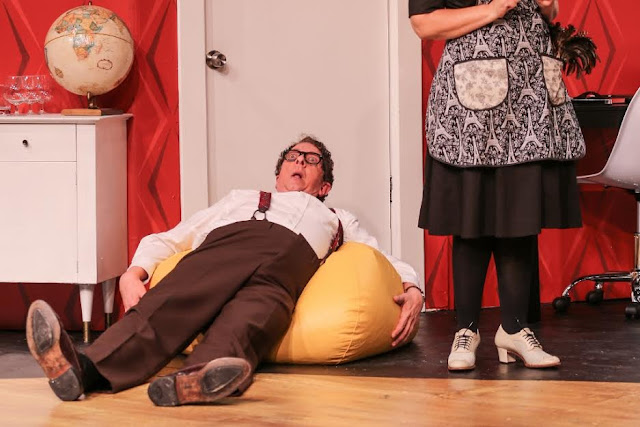 Director Curt Hetherington chose brisk intensity over dynamic range, so the action never really lets up, which seemed to delight the heartily laughing packed house on opening night. A wonderfully appropriate set designed by Blake R. York was propped and dressed by Jeffery Weaver with just the right touches of sixties kitsch. Spot on costumes by Michele Graves added to the image, aided by period sounds (and sound effects) by Jay Biederman and appropriately unobtrusive lighting by Niclas R. Olson.

When you need a break from serious reality, light fare like this goes down easily, especially if lubricated with the array of alcoholic temptations the lobby offers. If you promise not to overthink it, I promise you a diverting trip to the lighthearted, politically incorrect, completely improbable past that really only ever existed in the imagination of mid twentieth century adult (read “painfully adolescent”) males.