Bite Me
by Michael Dresdner 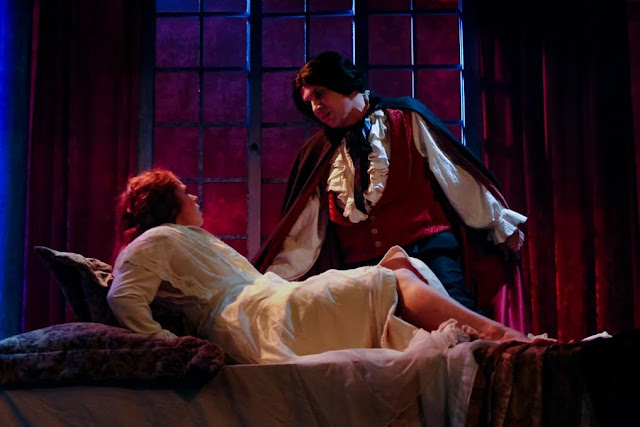 Dracula has arrived at Tacoma Little Theatre with all the sturm und drang its devoted fans could desire. This script, penned by Stephen Dietz and directed by pug Bujeaud, is far closer to the original Bram Stoker book than most, and should appeal to both modernists and purists. This is a challenging version indeed, and as luck would have it, there’s a top-to-bottom superb cast to make it happen. 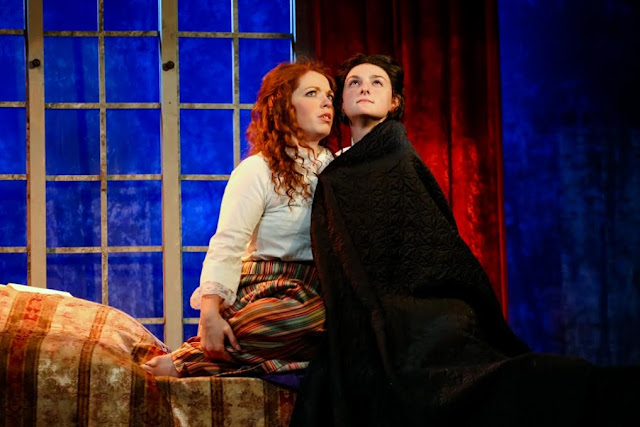 At the outset we eavesdrop on the naïve confidences of two sweet young women, Lucy (Brynn Garrett) and Mina (Jesse Morrow) who will soon be forced to shed their innocence as they either succumb to, or overcome, the insidious influence of Dracula (Michael Christopher.) The same will be demanded of the gormless Harker (Jacob Tice.) Sent to Transylvania to sell British land to Dracula, he’ll soon be forced to find the steel to become a protector of his true love and a hunter of evil. For his part, Dracula quickly sheds his civilized veneer when first dealing with Harker, and soon shows his true colors, displaying all the bravado, cape waving, and Jedi-like control powers we’ve come to expect. 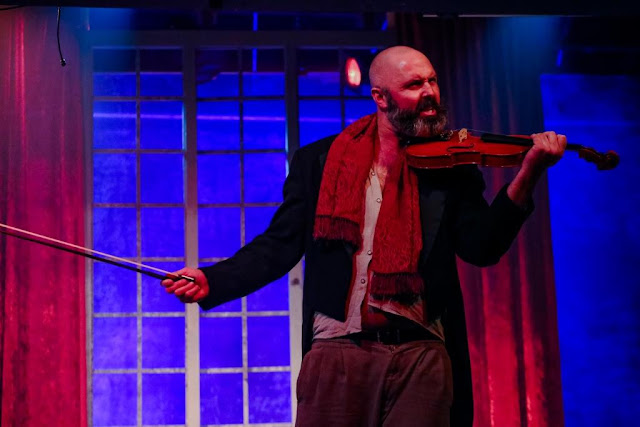 Brian Wayne Jansen, who plays the insane Renfield, goes from chillingly cool prologue and wrap up narrator to the tortured, demented soul under Dracula’s control in a role that is very physically demanding, to say the least. He’s not the only one. Even though they often appear while other onstage action tries to draw your eye, make sure you watch the cavorting of the two vixens (Ariel Birks and Kadi Burt) who creep and crawl as sinuously as slithering quicksilver while they torment Renfield, Harker, and others.

When first Lucy and then Mina start showing unexplained illness, weakness, and odd behaviors, Seward (Christopher Rocco), a doctor at the asylum where Renfield is being held and an ardent adorer of Lucy, calls on Van Helsing (Joseph Grant) for help. Along with Harker, they try to fight back against the sweeping tide of human destruction led by Dracula. 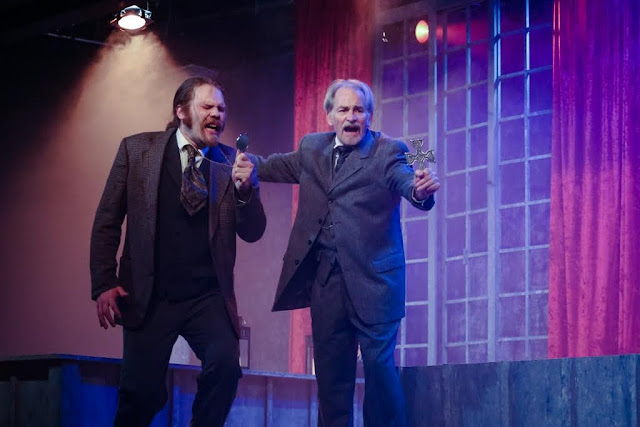 Clearly, this is a very stark, black and white allegory. Darkness and night cloak evil and destruction, while daylight, in the form of the trappings and beliefs of the Catholic church, represent good and salvation. The bombastic, earnestly devout Van Helsing freely wields not only garlic, but crucifixes, rosaries, and communion wafers as his weapons of war. He slowly convinces the others that these, along with religious invocations, are the only tools that will defend against this incarnation of Lucifer.

That same harsh rigidity is reflected in the excellent set by Blake R. York. With the exception of a few columns for solemnity, everything from the stage levels and background windows to the crypts and beds is naught but straight lines and hard edges. Even the curved stairs are not smooth bends, but angled facets. Costumes (Michele Graves) and set dressing (Jeffery Weaver) sometimes add a note of color, but on the whole, they help reinforce the dark/light theme.

When it comes to tech, though, the biggest bow goes to lighting designer Niclas R. Olson, whose complex and dramatic lighting changes clearly delineated not only times and locations, but moods and intentions as well. Kudos are indeed in order. And because the lighting, sound effects (Dylan Twiner), and stage changes are so complex and necessary, a special call out must go to the two women who made all of that unfold flawlessly, stage manager Nena Curley and her ASM Noelle Shai Edlin.

If you are a fan of this genre, and I understand that most people these days are, this is one version of this oft told story that you really should see. Favorite versions aside, this impressively ambitious presentation is bound to evoke both strong reactions and deep admiration for the crew that created it. Well done, my friends, well done.