ComicCon, the play
by Michael Dresdner 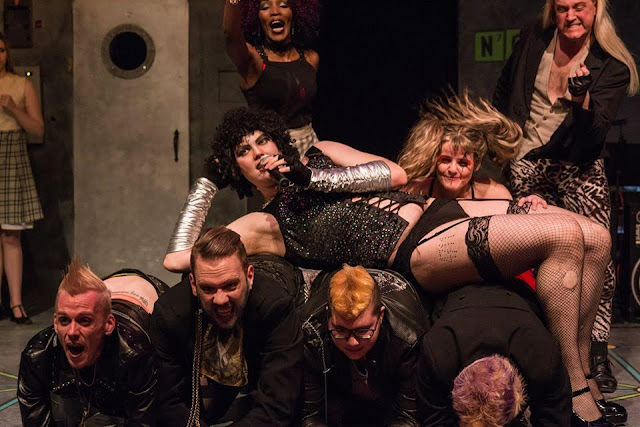 
With what has become a regular feature of their season, Lakewood Playhouse introduced yet another outre offering as the first play of 2017; The Rocky Horror Show. Directed by Alan Wilkie, this sci-fi/horror/comedy musical somewhat defies categorization. Let’s just say this property bears more similarity to ComicCon than to Mamet, and one suspects it was designed more to be an audience experience than to tell a story.

A comic parody of B-grade horror and sci-fi movies, both the play and movie versions have garnered a serious cult following since they were introduced in 1973 and 1975 respectively. Its devotees, some of whom were on hand opening night, dress in play-related costumes, yell out comic lines, and talk back to the narrator. 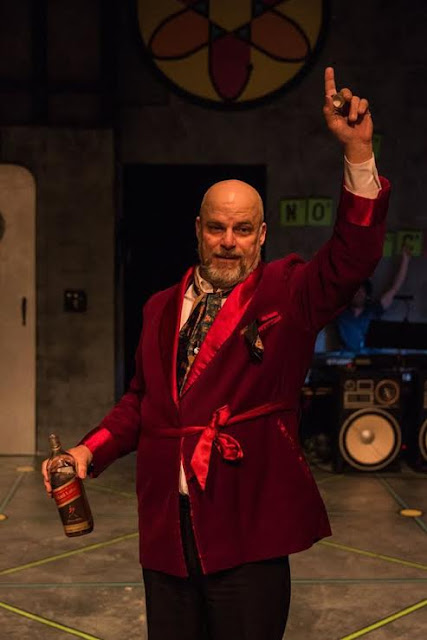 Admittedly, for those who are not aficionados, it can feel like you’ve wandered into a private club where you are not a member. No matter. Even a neophyte will get more than a fair share of entertainment, both on stage and from the surrounding costume-clad patrons shouting out a stream of commentary and jokes.

The play opens when Brad and Janet (Jake Atwood and Jenna McRill), a sweet, ingenuous, engaged young couple, go looking for a phone in a nearby castle after their car breaks down in a rain storm. There they meet a collection of oddly dressed and oddly behaving characters ostensibly holding an annual convention.

Once inside, each of the pair are quickly and easily seduced and bedded by the master of the castle, the tall, androgynous, gender bending, garishly clad Dr. Frank N Furter (Brandon Ehrenheim.)  Before long, the young innocents become part of the ongoing cross-dressing and sexual festivities. Frank’s minions include his long haired factotum Riff-Raff (Gary Chambers), a vivacious and sexy groupie named Columbia (Winnie Bean), and the maid, Magenta (LaNita Hudson.) Hudson does double duty as the sinuous, sultry Usherette, and knocks it out of the park with the beautifully executed opening/closing song “Science Fiction/Double Feature.” 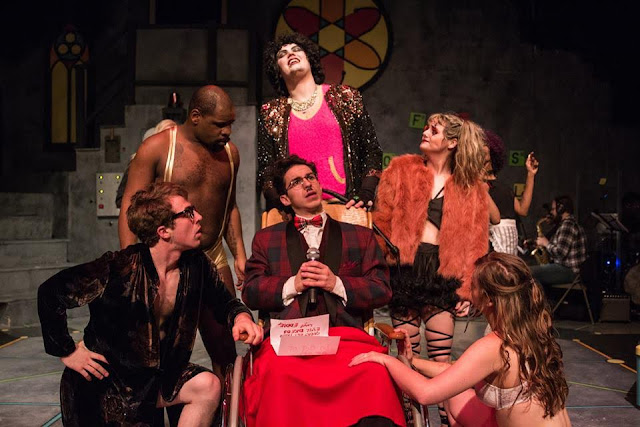 Rounding out the cast is Frank’s muscular lab creation Rocky Horror (Tony L. Williams), Eddie the delivery boy, and wheelchair bound Dr. Scott, a rival scientist (both roles played by Xander Layden), the audience baiting Narrator (Lakewood Artistic Director John Munn), and a gaggle of “Phantoms” who make up the ensemble. Of them, keep an eye on Jonathan Hart during the dance numbers, and especially during the pole dance in Act 2. You’ll recognize him by his spiky crest of blonde hair.

In truth, the rather thin story line is merely a framework on which to hang various scenes bristling with scanty and outrageous costumes and energetic song and dance numbers. All of it is heavily larded with comic one liners, sexual innuendo, simulated on-stage sex acts, and a good dose of gender ambiguity.

"There is a continuum between male and female” said Richard O’Brien, the creator of  the original play. “Some are hard-wired one way or another. I’m in between." This could explain a lot of what you’ll see onstage.

I won’t call out individual actors because in spite of the fact that there are leads, in truth this is a production that depends far more on ensemble strength than individual performances. As a group, they were very impressive, and the audience adored them. 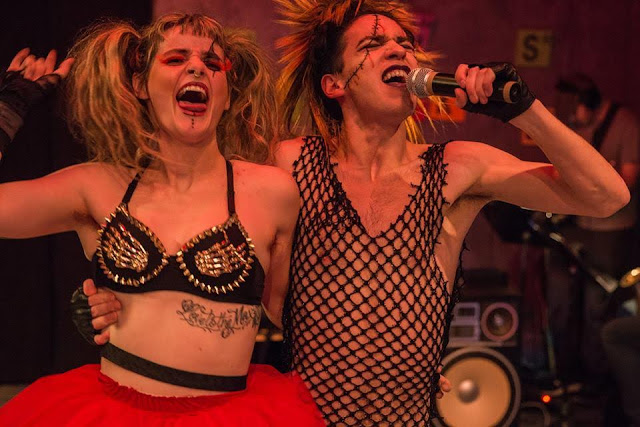 Ditto for the varied and eye-catching costumes by Diane Runkel, lighting by Aaron Mohs-Hale, sound design by John Munn, and a simple, effective set by Erin Manza Chanfrau. Music director Josh Zimmerman led an on-stage band consisting of himself, Joseph Ralston, James Sloan, Ian Mengedoht, and Tai Taitano. Not only were dance numbers (by choreographer Kayla Crawford) varied and eye-catching, there were also a number of  clever human set pieces, including some entryway lions and a car with “working” windshield wipers and doors.

I suspect most people who go to this already know what to expect and have seen at least the movie, if not the play, numerous times. If you are one of those, this production is, again, worthy of your time. For anyone new to this cult standard, come take a look at what the others are talking about, now that you have a heads up about what to expect.