The Complete Works of Shakespeare Abridged (revised) at TLT 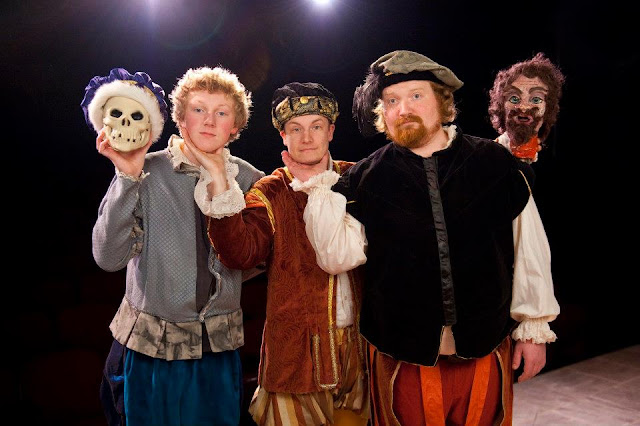 With her unerring eye for humor and a truly amazing cast, director Suzy Willhoft has brought one of the stage’s funniest properties to a new and greater height of hilarity and lunacy. The Complete Works of Shakespeare Abridged (revised), now playing at Tacoma Little Theatre, is the update of a screamingly funny mishmash of all (yes ALL) of the Bard’s plays delivered not in warp speed, but rather in warped speed. Along with out-and-out mockery of Shakespeare, there’s wild physical comedy, bawdy jokes, malapropisms, cross-dressing, mondegreens, and plenty of sexual innuendo.

It may seem like an onslaught, but it’s only a three person cast; Luke Amundson, Coleman Hagerman, and Alex Smith, all of whom are well beyond outstanding. They race on and off stage cycling through a wealth of voices and mannerisms, and endless rapid fire costume changes, creating dozens of different characters and a lot of buffoonery.

The updated script is funnier than before, but still has room for expansion with local and timely references, like one to Downton Abbey added by Willhoft. Improvisation also rears its delightful head, especially when the cast turns their impish attention to the audience. By the end of act two, they’ve dragged everyone into the mania, whipping the audience into a laughing, roaring frenzy. You’re never sure if you or the guys on stage are having more fun.

Along with great actors, a top notch property, and very adroit direction was a stellar support group in the background. I certainly don’t envy costume designer Michele Graves who created heaven knows how many truly funny outfits. Niclas R. Olsen did his usual excellent job with lighting, as did Blake R. York with the set/backdrop. However, the backstage angels who really deserve a bow are Sarahann Rickner, who not only did props (there were plenty!) but also served as stage manager, and her ASM Sophie Nevins, the backstage dresser known as "Bob" who keeps the out-of-sight lunacy running smoothly.

The only sad aspect of this play is that it only runs two weekends, so you have tonight, tomorrow and next weekend to see it, and that’s all. And strangely, tickets are only $10, which certainly means that if every seat is not filled for every remaining show, the heavens themselves will surely weep.

Don’t let that happen. Re-arrange your schedule and do what must be done, but make sure you see this show. It is simply too perfect, and far too funny, to be missed.