The Woman in Black at Lakewood Playhouse 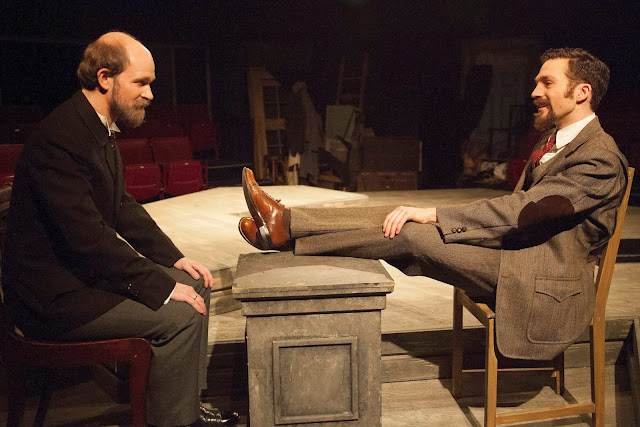 If a classic ghost story rings your bell, Lakewood Playhouse has just the ticket for you, literally. The Woman in Black, directed by Beau M. K. Prichard, is an old style chiller that starts with a puzzling but innocent premise, and slowly unfolds to a decidedly upsetting conclusion.

This is not a play of gunshots and chilling screams, but rather one that builds gradually, revealing its most horrid aspect only at the very end. There’s no gore, and although we hear sounds suggestive of fear and calamity, we never see anyone harmed or killed. Rather than being visceral, it is an intellectual thriller that relies on the audience investing in the somewhat convoluted tale.

The story begins in an abandoned theater with a man named Kipps (Dylan Twiner) who hires an unnamed actor (Nathan Rice) to help him present the horrific true story he’s written down. The hired actor agrees to portray Kipps, who in turn portrays both the narrator and all the other characters in Kipps’ story. Kipps, we find out, is a solicitor sent to close the affairs of a now dead recluse, and at her funeral he catches the first glimpse of a mysterious woman in black (Kat Ogden in a non-speaking role), though none of the other decidedly skittish townsfolk admit to having seen her. 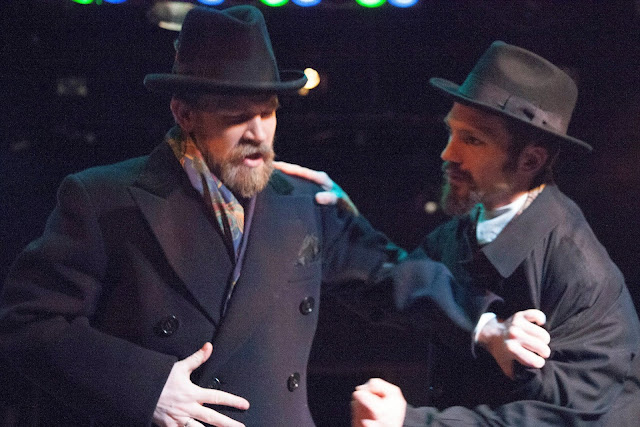 Kipps stays in the dead woman’s secluded home on the marshes to plow through her papers, and gradually discovers the horrific secrets of the household. As he does, he experiences first-hand a range of inexplicable and spooky phenomena, all of which seems to have some connection to the woman in black. It is only when the tale is concluded and we’re once again with the actor and the storyteller in the abandoned theater that we find out just how evil, and how dangerous, all this may be.

Both actors did a very credible job, though, admittedly, Twiner had to create many more iterations and dialects. They were helped by copious and excellent lighting effects by Niclas R. Olson and sound effects by Keith Jewell, and a range of spot-on period costumes by the meticulous Alex Lewington.

And yet, there was a nagging sense that the whole, in this case, was a bit less than the sum of its parts. Perhaps it was the wordy and plodding first act that robbed it of some of its thrill, or pacing that dragged just a tad too much. Then too, doing this play in the round presents its own challenge. It’s important for the audience to witness the fleeting glimpses of mysterious people and actions, but depending on what direction you are looking and where you sit, you might well miss some of the more subtle elements.

As I said, this is classic fare for the ghost story lover, but plan to be patient and attentive for the first half, for the bulk of the action and all the explanation comes late in the play.