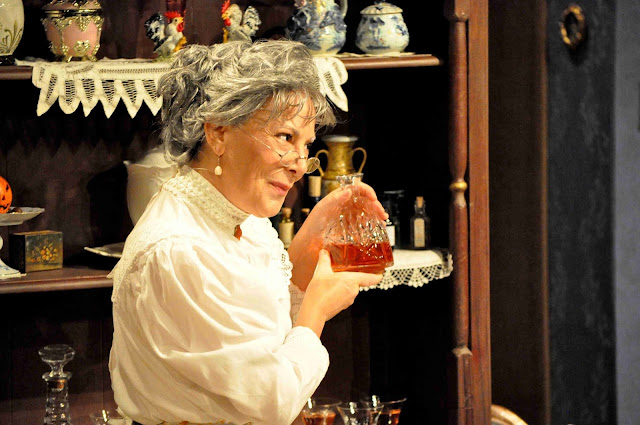 The first of several running gags in Arsenic and Old Lace, the opening salvo in Lakewood Playhouse’s celebrated 75th season, is that the male lead, Mortimer, is a reluctant theatre critic who despises all the plays he sees. That’s the least of the unlikely scenarios we’re asked to accept as normal in this dark comedy that’s decidedly more farce than noir. Directed by Dale Westgaard, the black humor is played so broadly that it becomes almost a corporeal cartoon; a layer cake of absurdity made manifest.

At the heart of the play is a pair of achingly sweet but morally askew spinster sisters who care for lonely, single men with the offer of lodging. However, the room comes paired with a compassionately administered dose of poisoned elderberry wine, another running gag. Their nephew, the aforementioned Mortimer, discovers their peculiar take on charity, and their impressive body count, during one of his frequent visits inspired largely by his interest in their neighbor’s daughter, Elaine, who more than reciprocates his nascent ardor. 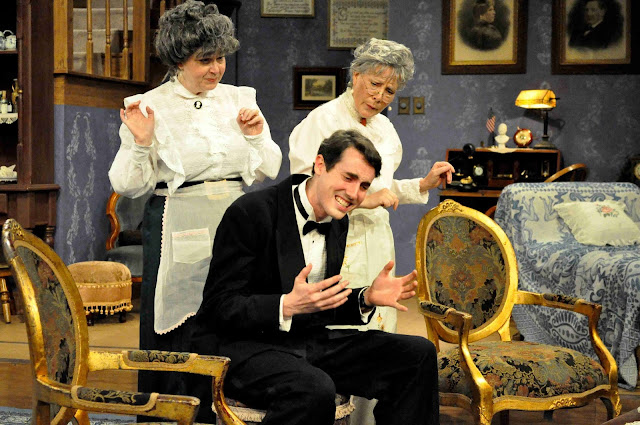 L to R: Abby (Diana George), Martha (Rebecca McCarthy). Seated: Mortimer (Jacob Tice)
Also living in the house, and definitely adding to the lunacy, is their nephew Teddy, a bugle-blaring delusional convinced he is President Teddy Roosevelt. He unwittingly helps bury the many bodies while convinced he is digging the Panama Canal in the basement. All this occurs under the noses of the local police, several of whom visit frequently due to bugle noise complaints, and who, to a man, all adore the sweet sisters. One cop adds extra confusion by refusing to leave until Mortimer helps him flesh out the play script he’s writing on the side. 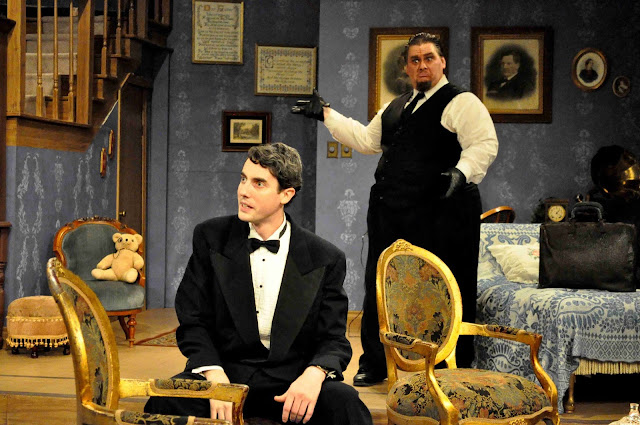 Things become much more complicated when yet another nephew, the long-absent and quintessentially evil Jonathan Brewster, shows up with both a dead body and a hapless criminal sidekick in tow. Jonathan, deservedly on the lam, has a much more serious-minded approach to his multiple murders. The sidekick is his plastic surgeon, ironically named Dr. Einstein, who surgically provides Jonathan with new faces as needed to evade capture. Hey, I said it was absurd!

Diana George and Rebecca Lea McCarthy play the Brewster spinsters, Abby and Martha respectively, with even more flightiness than charm. Two frequent house visitors are the “flaco y gordo” pair of police officers played by Kerry Bringman and Kenneth Loth, clearly meant to be evocative of Laurel and Hardy in both stature and nature. Ana Bury is the adorable Elaine Harper, one of the few totally sane characters on stage. Her love, and the play’s leading man, Mortimer Brewster, is nicely handled by Jacob Tice. Meanwhile, Jeffery Weaver cuts a wide and delightful path as the nutty Teddy “Roosevelt” Brewster.

Chris Cantrell is both realistically threatening and convincingly evil as Jonathan Brewster, while Tony Onorati plays his German sidekick Dr. Einstein with overtones of Peter Lorre’s Ugarte from Casablanca, and with a decidedly unusual accent. Both Mark Peterson, as the play-writing cop, and Steve Tarry, as his somewhat jaded police lieutenant, bring excellent and realistic portrayals to the fray, along with some much-appreciated nuance. Michael Sandner, Patrick Gerrells, and Ernest Heller round out the other minor roles, along with Connor Tibke, who mutely portrays the two dead bodies we get to see.

Set designer Amanda Swenger outdid herself with a lavish and beautiful set portraying the Brewster living room, aided by set dresser Halley Phillips, propmaster Virginia Yanoff,  Kristen Zetterstrom’s lighting, and Lindsey Morck’s sound design. As she so consistently does, costumer Alex Lewington created both an accurate period setting and a stunning array of outfits, pin perfect from hats to shoes.

Eventually, all the situations and people in this play get sorted out not so much by their actions, but by their natures. The lesson here is that good intentions equal good deeds, even when they’re not. If nothing else, it’s a very comforting way of wrapping up this convoluted cinnamon bun of a play.

All photos by Kate Paterno-Lick

Posted by Dresdner's Theatre Reviews at 10:21 AM