Perhaps I should explain my sub-title, “Two by four.” Last night I went to see The 39 Steps, a raucous comedy at Renton Civic Theatre directed, oddly enough, by John Munn, the artistic director of the Lakewood Playhouse. It’s a play with just four outstanding actors playing a multitude of parts; hence the four. The two comes from the fact that in just one week, the same play, with a different director and cast, opens a few miles away at Centerstage, and if you keep posted, I’ll bring you that review next week. 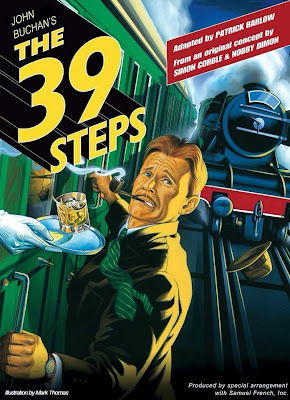 While it may sound familiar, this is not the famous spy thriller of the same name by Alfred Hitchcock. Although it borrows the plot line, these 39 steps climb a decidedly different staircase.

Think of the prop comedy of Jonathan Winters overlaid with the goofy physical mayhem and overt sexual innuendo of Benny Hill and you’ll be on the right track. Add to that all the sound skills of a whole team of Foley practitioners with the mime skills of fine physical actors and you’ll have some idea of the tenor of the play.

Bob DeDea plays Richard Hannay, the protagonist and only character who stays in the same role throughout. Deya Ozburn primarily plays the raven-haired German woman Annabella Schmidt, Scottish red-head Margaret, and English blond Pamela. Almost all of the other male and female characters, and there are dozens of them, are portrayed by two thoroughly adroit clowns, Bryan K. Bender and Eric Hartley. To put it succinctly, all four actors are nothing less than amazing.

They are supported with wonderful costumes by Rachel Wilkie, spot on lighting by Curt Hetherington, clever props by Jessica Anderson, and superb sound effects by Jay Biederman.

With no set to speak of, the actors use props, mime, movement, and both self -generated and off stage sound effects to create an airplane dogfight, a careening car replete with working doors and windows, a comically defective window shade, conveniently moving doors, floating hand held windows, a typically rocking train, and more. There’s even a harrowing chase scene on a railroad trestle bridge created on nothing but the stage apron.

The two clowns, Bender and Hartley, flip back and forth through a maze of characters in seconds, often with no more change than yanking off one hat and replacing it with another, altering their voices, accents, mannerisms, and even heights in the blink of an eye. In one scene they start as annoying traveling salesmen on a train, then quickly become a newsboy, a conductor, a brace of cops and more, cycling back and forth through all the characters repeatedly with astonishing rapidity.

To some extent this is an insider’s play for Hitchcock fans. It’s laced with subtle references to his characters and movies, including Strangers on a Train, Rear Window, Psycho, Vertigo, and North by Northwest. Naturally, that includes appearances of the big man himself, both as his typical cameo in human form and another time as a tiny silhouette during a shadow puppet show reflected on a back-lit scrim.

With so much mania packed into act one it’s hard to sustain that level of frenetic activity, and the second act, possibly because we’ve been inundated since opening curtain, occasionally becomes a bit tedious, especially for those not well versed in Hitchcock trivia. Still, it is a riotous three-card Monte of a play, designed to showcase the considerable talents of its actors while incessantly tickling the funny bone of the audience.