The Complete Works of Shakespeare Abridged (Revised) at TLT

Barking Mad; or How Hamlet becomes a Great Dane
by Michael Dresdner 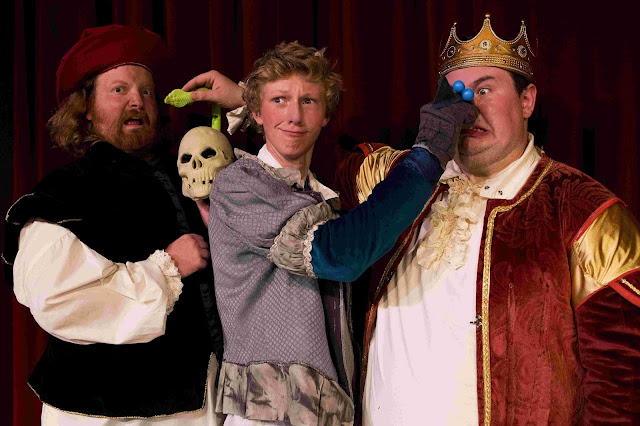 Again. She did it again.

Last year, after seeing her version of The Complete Works of Shakespeare Abridged (Revised) at Tacoma Little Theatre, I wrote “With her unerring eye for humor and a truly amazing cast, director Suzy Willhoft has brought one of the stage’s funniest properties to a new and greater height of hilarity and lunacy.”

That show was so well-loved that everyone involved realized its two weekend run was not nearly enough, so they brought it back for an encore. If anything, it’s even better with a slightly modified cast that has all the chops and incredible chemistry to boot. This time it’s here for three weeks, which is better, but still not enough. 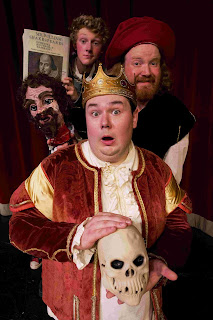 Luke Amundson and Coleman Hagerman have returned from last year with a new partner in theatre crime, the redoubtable Blake York, to take us through a rapid and hilarious tour of all of Shakespeare’s plays in an hour and a half. There are reams of costumes (Michele Graves) along with dolls, puppets and other props (Sarahann Rickner), but mostly there are three incredibly funny guys cross-dressing, baiting the audience, changing characters and voices repeatedly, and flinging exceedingly funny lines in every direction. It’s all in the name of turning Shakespeare from imposing intellectualism into harmless, engaging farce.

The opening night audience adored them, as did I, laughing and applauding from the opening salvo to the anything-but-bitter end. Nor were they spared; during the second act the three actors goad everyone into becoming part of the raucous insanity.

Of course, this play demands much not only from the actors and director, but from the backup crew as well, so a tip of the hat must also go to stage managers Sarahann Rickner and Sophie Nevins and lighting’s Niclas R. Olson.

And the good news? This encore is still only $10, so there is absolutely no reason for any right minded person to miss it.

For a more in-depth take, feel free to read my review of last year’s version of this same show at http://michaeldresdner.blogspot.com/2013/02/the-complete-works-of-shakespeare.html

It all still holds true for this wonderful production.