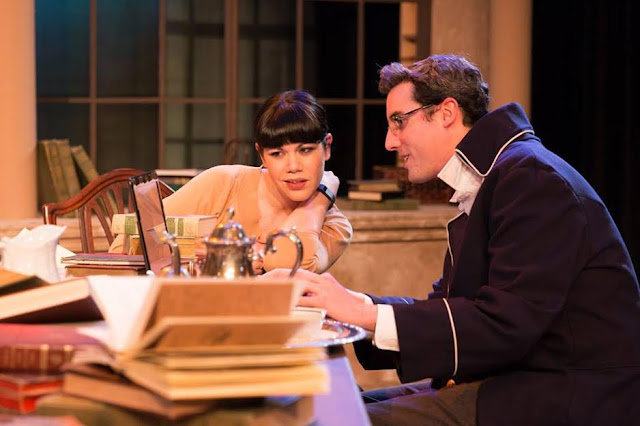 Lakewood Playhouse has taken a big risk with the current production of Arcadia, a Tom Stoppard play directed by Steve Tarry. Granted, they’ve pulled together some truly fine actors dressed in lavish costumes on a stunning set, but the play itself is nonetheless a challenge, and may be a hard sell.

Wordy, fast paced, and laced with some seriously funny lines and reactions, it’s a play that is very demanding on the actors. Like Shakespeare, thanks to layers of nuance, it may very well be a lot more fun for the actors than for the audience, some of whom seemed either lost or overwhelmed on opening night.

Stoppard writes for the intellectual elite and lets everyone else either keep up or fail to do so. Thus, there are scientific theories, mathematical proofs, and a brace of poets set against the incongruous contrast of lustful and amorous urges. Perhaps it is intentionally abstruse, written for the sort of theatre goers who are fascinated and invigorated by things they don’t understand.  If that’s you, make sure you see it, but even I know that’s not the majority of the typical community theatre audience.

The plot, such as it is, unwinds in fits, so you really don’t see the whole picture with any clarity until the end. I don’t want to be a spoiler, so I can’t offer you too much of a synopsis, but I can describe the set up. 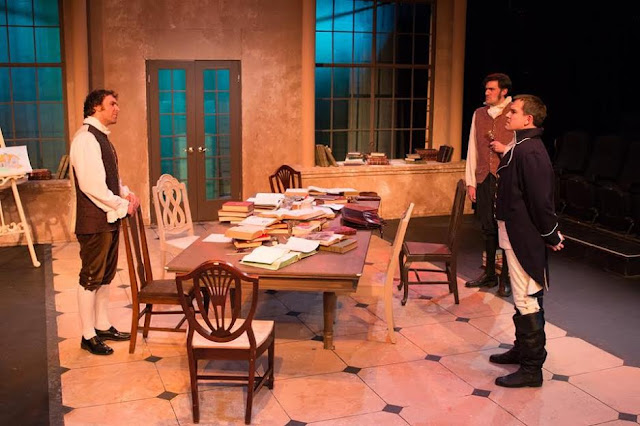 Two different generations of the Coverly family and associates occupy the ancestral manse, one group in 1809, the other in the present. The parallel scenes hop back and forth between the time periods, and eventually culminate in a final scene where both widely spaced generations reach their climax on stage simultaneously.

There are other characters in both time periods, but the modern scholars, trying to peel back the layers of the history and ancestors, are the ones who help us understand both the nature of the former inhabitants, and the mystery of what happened to them. Perhaps the quirkiest secondary character is Gus/Augustus Coverly (Charlie Stevens), who in his present persona is a rather comically lovelorn mute, silently pining for Hannah. 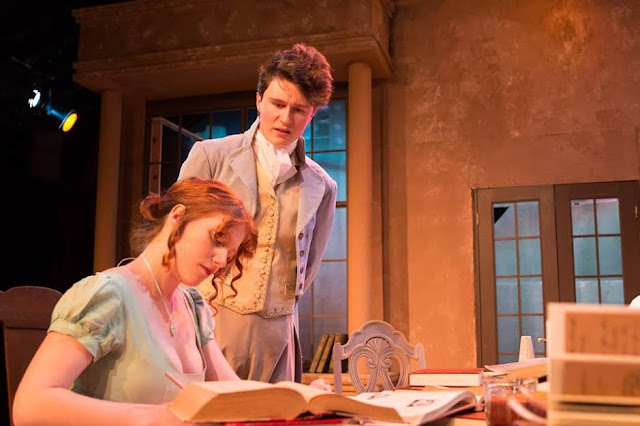 In general, the acting was quite good, though I will admit I connected more with the modern troupe, led by Tice and Slaughter, in part because they added the most clarity to this convoluted story. Overall, the pacing felt rushed a bit, doubtless to keep what is already a three hour theatre night from going even longer. It is, after all, a very wordy play.The set, by Blake York, was impressive, and costumes, by Rochelle-Ann Graham, were suitably lavish and period, though at times ill-fitting, a common community theatre curse of too many body types and too few costume options.

All in all, it’s an admirable undertaking, and a night of theatre that will certainly challenge you, if only to keep up. Don’t expect a simple, spoon-fed, linear story. Come looking for a bit of mental challenge and you’ll fish your wish.