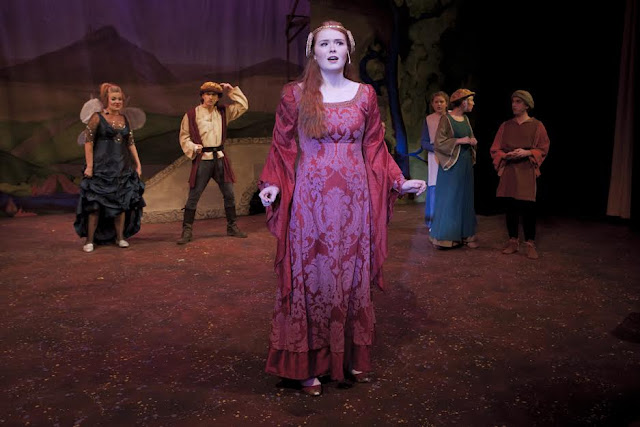 The traditional English Panto, which Centerstage has been offering lately in the December time slot, is based quite loosely on a common fairy tale. This time it’s Sleeping Beauty, but only the barest outline of the story remains. Mostly it is a platform for a clutch of the traditional Panto conventions; lavish costumes, overblown scenery, plenty of singing and dancing, a bit of rather obvious magic, general silliness, and lots of very broad comedy, both verbal and physical.

There’s also non-stop breaking of the fourth wall, since audience participation is a must in Panto. Many characters talk directly to the audience, encouraging (hounding?) them to respond with boos, call and response, chants, and warnings and advice to certain “clueless” cast members, like King Kevin (Dale Bowers.)

Chief among the audience warmers, and three of my favorites of all those on stage, were the good Fairy Moonbeam (Sarah Henley Hicks), her evil rival Carabosse (Katherine Jett), and the court jester of the stage, Jangles (Josh Williamson), a particularly and impressively tireless and energetic triple threat actor. 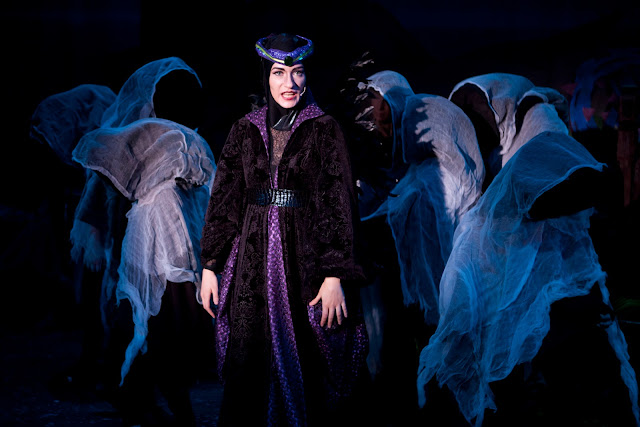 Carabosse (Katherine Jett) and her minions

While former years have skewed the comedy heavily toward the ribald, this year was quite a bit more tame. It seemed much more targeted toward a younger audience, and in fact, opening night was chock full of youngsters who seemed to be enjoying it no end. The pace was a bit calmer, the jokes safer and clearer, and the whole presentation more kid-friendly.

While there were still a few innuendos and inside local digs, most of the non-stop humor consisted of  puns, groaners, and other word play oddly reminiscent of  some iteration of “The Boy’s Big Book of Jokes” that I owned some 55 years ago. You know; the sort of humor all adults have heard before, but that is generally deemed hilariously clever by the average sixth grader.

What bawdiness remained was delivered almost exclusively by my favorite onstage character, Nurse Nellie. She follows a Panto tradition of a large and perhaps unattractive male posing as an older woman who is outrageous, gaudily overdressed, sarcastic, superior, and blessedly, without restraint. Think Dame Edna and you’ll be on the right track. As is often the case, the role was played by the theatre’s own Alan Bryce, and he is consistently brilliant at it.

Rounding out the cast was the youth and adult ensemble, which contained some very talented people. Oh yes, and there’s Helga, who is a gigantic but not particularly dangerous dragon. Hey, this is Disneyesque fare with no death or serious pain, admittedly a far cry from the tale’s grim Grimm origins.

One element I missed was the lead boy, normally an attractive young woman dressed rather provocatively but playing the male romantic lead. This time Prince Peter was a man (Cooper Harris-Turner), and his task and pleasure was to win Princess Aurora (Sarah Mather), who becomes sleeping beauty.

Director Vince Brady called upon the talents of Catherine Cornell for the varied but exaggerated scenery, Laura Campbell for the almost endless props, Amy Silveria for lighting and sound design, and Janessa Styck for the wide range of costumes, including some truly spectacular headgear (and chest gear) on Dame Bryce. Music director Deborah Armstrong led the onstage band (Andrew Carson, Kaarin Lysen, Tai Taitano, Cal Neal) superbly, a characteristic that’s become the norm for these shows.

One warning, should you decide to take your kids or grandkids: This is a long show. From curtain to curtain, with one intermission, it ran just ten minutes shy of three hours. The intermission itself came an hour and forty five minutes after curtain, so if you’re my age, consider hitting the john before the play starts.