A Christmas Story at TLT 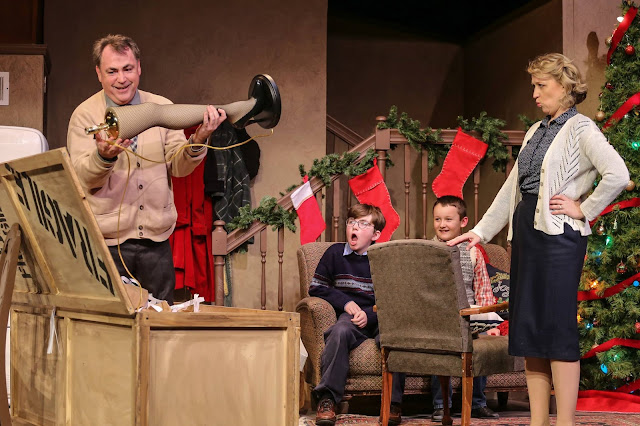 Thank you. Yes, that’s a deep, heartfelt thank you, from me and all reviewers everywhere, to Tacoma Little Theatre for this absolutely wonderful production of A Christmas Story.

Why? Because this 15-year-old stage version of Jean Shepherd’s popular movie is done by schools and community theatres almost every year, meaning we reviewers get – let’s say “treated” – to it again and again. All too often it is a hodge-podge of cute but tedious children, earnest but misguided production values, and spotty acting. This version, though, is the exact opposite. 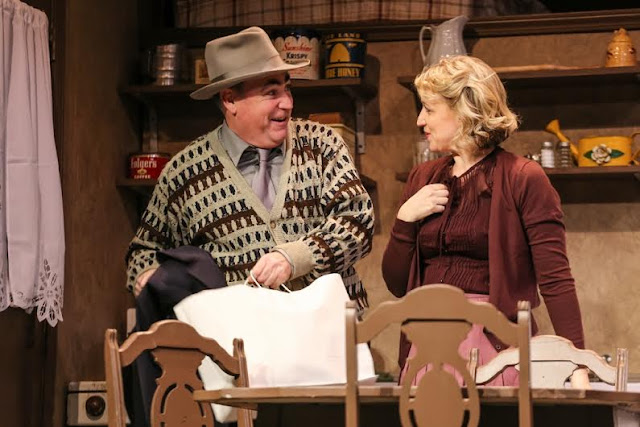 Jennifer York has directed a perfect play (yes, better than the movie) with brisk pacing, a superb cast both individually and as an ensemble, a set so good that at one point it got its own ovation, and all the trimmings – lights, music, surprising props, costumes – keeping pace.

What does that mean for you? It means this play is a pure pleasure to watch; funny, fast-paced, captivating, visually and aurally interesting for both adults and children, and best of all, completely believable. More on that later, but let’s take a break for a quick plot summary. 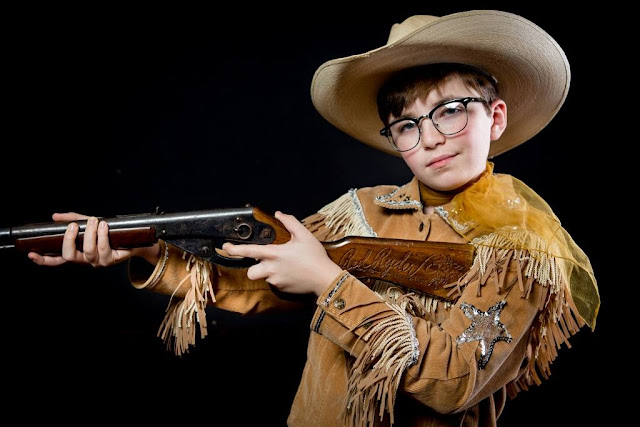 Liam Loughridge as Ralphie in his imagined Red Ryder gear.

What nine-year-old Ralphie Parker (Liam Loughridge) desperately wants for Christmas is “a Red Ryder Carbine Action 200-shot Range Model air rifle with a compass and this thing which tells time built right into the stock,” but everyone, from his mother (Heidi Walworth-Horn) to his teacher Miss Shields (Jessica Robins) and even Santa himself, dismisses the idea with the tired warning “you’ll shoot your eye out.” He plots to make it happen anyway amidst the nostalgic trappings of a boyhood in a small town in 1940’s Indiana. 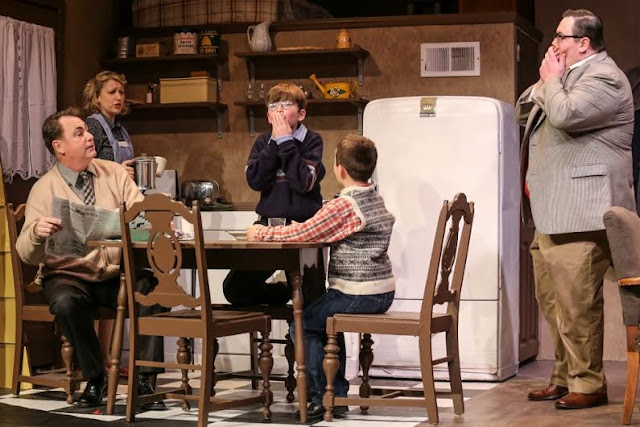 Sub-plots abound. His father (Andrew Fry), who swears a blue streak while battling the indignities of a cranky furnace and the neighbors’ hateful dogs, manages to win “a major prize” in one of his many quiz contests. The prize is a garish lamp shaped like a woman’s leg. 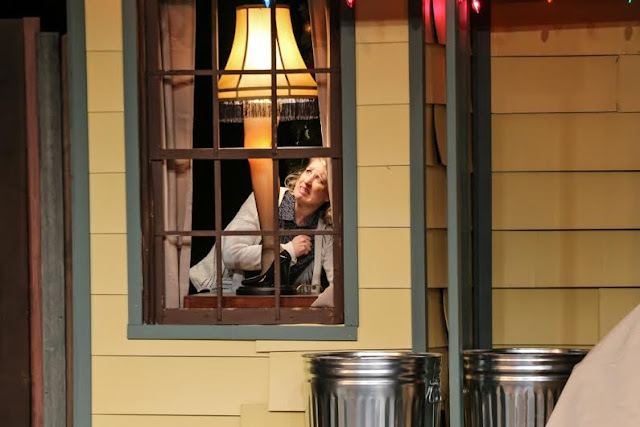 His mother, who understandably hates the  lamp, holds the family together, lovingly managing his slightly weird younger brother Randy (Mason Gibbons and Luke Miller, alternating in the role), who eats like a pig (literally) and hides constantly, and coddling her often clueless husband while feeding him the right answers to his contest quizzes. 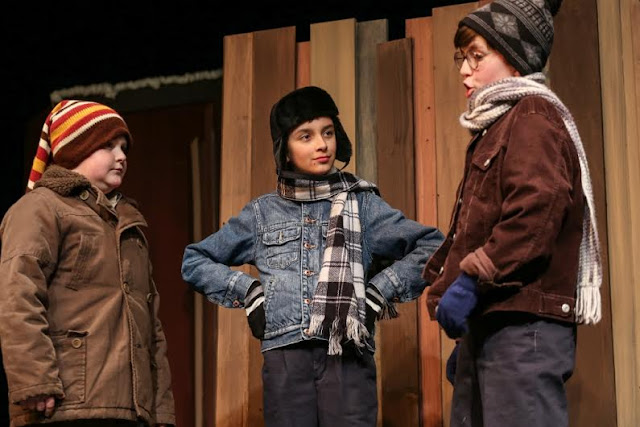 Ralphie has his crosses to bear as well, including a humiliating pink bunny costume from his aunt, the frustrating adults in his life, and the ministrations of school bully Scutt Farkas (Evan Sherman.) Fortunately, he has his friends, Schwartz (Tyler Saum) and the hapless Flick (J.J. Greenwell) who gets his tongue stuck on a frigid metal pole after a dare, to share his plight. And of course, there are the girls at school, including Helen (Haylie Hetland) and her friend Ester Jane (Gabi Grimmett), who has an obvious crush on Ralphie. 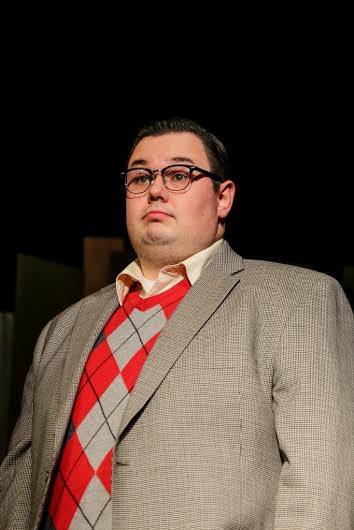 Blake York as grown up Ralph

The whole story is narrated by a now adult Ralph, charmingly and adroitly unwound by the estimable Blake York, who deserves his own “major award” not only for his acting, but also for designing the amazing sets and sound cues. Along with the integrated narration, Blake pops in and out of the play filling the roles of other minor characters, including Red Ryder himself in full regalia. His appearance in the scene where Ralphie has to wear his pink bunny suit is a delight in itself. 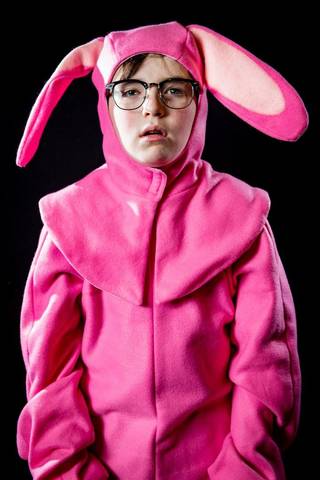 I can’t say enough good things about the actors, and I mean all of them, from the ensemble support (Ron Bauer, Veronica Bauer, Augusta Greenwell) through all of the child and adult roles. What really shone was their realism, individually and collectively as an ensemble, with no overacting in sight. They were completely believable and apropos, and that makes all the difference. 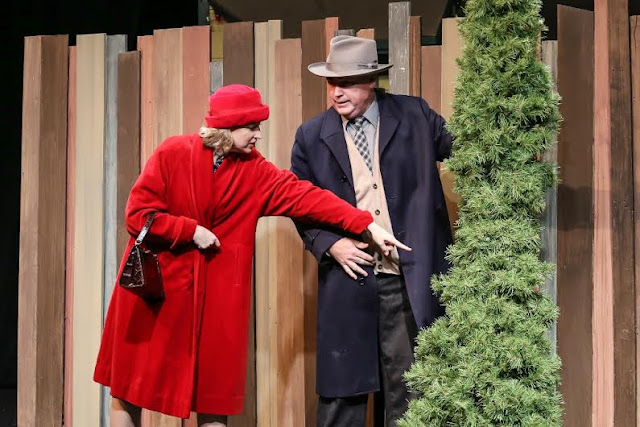 Fry, especially delightful when his “prize” arrives, and his wife, Walworth-Horn, hone a thoroughly genuine and familiar pair of parents from that period, both as themselves and as how Ralphie sometimes sees them. Loughridge was top notch as Ralphie, hitting all the highs and lows needed for the role. Robins creates a superb Miss Shields, the teacher, then tops it with out-of-character high notes in the A+++ scene, the witch scene, and later as a silent but hilariously disgruntled elf in Santaland. I could go on and laud each actor in turn, but suffice it to say the whole cast was outstanding.

And speaking of outstanding, let’s talk about the set. Built on a revolving stage with sliding panels adding more options, there are at least six different quickly alternating locations, all of them superbly rendered. The alley, with its weathered fence boards, the school room, and Ralphie’s house, inside and out, all share the same dun-hued color palette, the perfect backdrop to how Ralphie viewed his mundane, small-town surroundings. Only the glitzy Santaland set breaks the mold, sparkling as it would in a youngster’s vision. 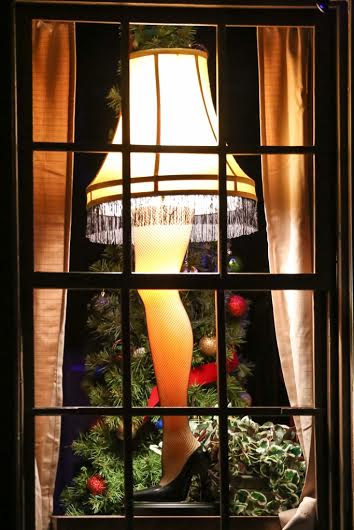 The lamp, in all its glory
Wonderful props by Jeffery Weaver ran the gamut from the expected lamp and gun to a surprising giant spider pin. All the props and set dressing in the house, school, and department store were exactly as they should be. Creative lighting (Niclas R. Olson) helped set both moods and discrete locations, and the sound support (Blake) was just ideal, with precisely the right familiar songs popping up at each juncture.

Perfect too, were the costumes (Michele Graves), and in this case, that’s saying a whole lot. I won’t go into them all as there were a lot, but I will say it was as outstanding a job of costuming as I can imagine. And because the show was so complex, with rotating sets, moving panels, pop-up animals (you’ll see) and endless quick changes of clothes, music, and lights, a tip of the hat goes to stage manager Nena Curley and her ASM Alyshia Collins. That was an amazing job of legerdemain. 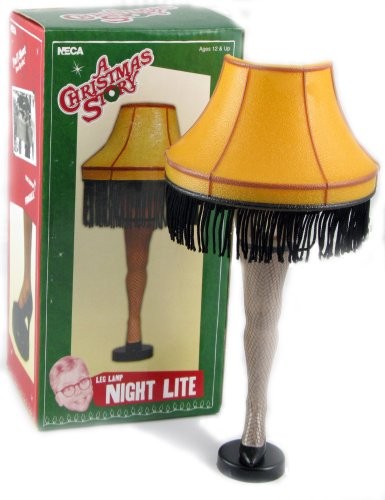 This one's mine. You can buy your own in the lobby.

Let’s call this the ideal Christmas season treat for you and your children and grandchildren. It’s great for all ages, so take the family and indulge in a beautifully crafted and thoroughly entertaining comedy. If you like, do what I did; spring for a memento, sold in the lobby, in the form of the iconic leg lamp rendered as a night light. Be warned; it’s a short run and even opening night was packed, so get your tickets early and don’t miss this one.