A Comedy of Errors at Lakewood Playhouse

Buttons and bows
by Michael Dresdner 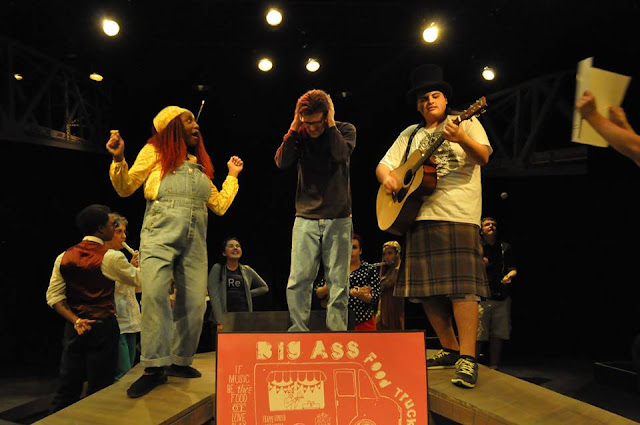 Re-imagining Shakespeare into different time periods and settings is part of the grand tradition of theatre, and that’s what opened last night at Lakewood Playhouse. This time around director Kristie Worthey has plunged A Comedy of Errors into the present day Pacific Northwest, with the two lost pairs of twins hailing from Seattle and Portland respectively.

First, a quick recap of the highly confusing story line, just to refresh your memory. Egeon (called Aegeon in this version) and his wife had twin boys, both named Antipholus, for some reason. The parents bought a poor woman’s twin boys, born the same day, to be slaves for their boys. Both slaves are named Dromio. Perhaps there was a name shortage.

The family was riven in a shipwreck and divided as such: Aegeon raised one Antipholus and his Dromio, who are now “away” searching for their siblings. Meanwhile, the other pair were separated from their mother. The searching pair arrive in, well, Portland, in this case, unaware that their father and their mother, now an Abbess in the town, are both there, but unaware of one another. They are also unaware that the orphan twins they seek live right there in town, as a well-know, highly respected, and wealthy married man and his slave. 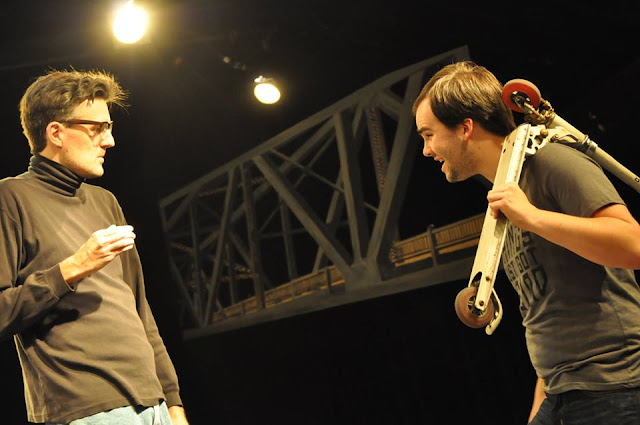 As they make their way through the day, all four of the twins, in pairs and alone, are constantly mistaken for one another by townspeople, wives, and even each slave to his master. What ensues are inexplicably locked homes, seemingly illegitimate debts, lost gifts and money, confused sexual liasons, an arrest; you name it, whatever can go wrong does, until all parties are comically aggrieved and thoroughly confused. Eventually, all is revealed; the Abbess reunites with her long lost husband, Aegeon, and the two sets of twins discover each other, and their parents, for an all-around happy ending.

Worthey chose to set the play in a Portlandia version of Portland, OR, one chock full of weirdness in both behavior and dress, and even more odd, one where there are no long lines in front of Voodoo Donuts (named Zombie Donuts here.) The townsfolk cavort, joke around, make balloon animals, and generally act out with unfettered frivolity. They also trot out and play a variety of instruments , including flute, guitar, recorder, and saxophone, a nice tribute considering yesterday was the 201st birthday of inventor Adolphe Sax.

Naturally, this conceit gave Worthey the chance to add local references, timely gentle insults, and regional jokes to the text, some quite good. (Note to the community at large: “Deja Brew,” the punch line of one such gag, is actually a damned good name for a barista kiosk, and certainly appropriate for a Java Tacoma installment.)

As for the play itself, the original still shines through, relatively unaffected and largely unharmed by this local and modern treatment, with one minor exception. I was sorry to see the famous and outrageous “spherical like a globe; I could find out countries in her” rant get truncated.

And the actors? With all Shakespeare, the most important challenge for the actors is twofold; they must truly understand what the language is saying (since, after all, it is not in present day English), and they must make sure, with expression, delivery, and body language, that they somehow convey that meaning clearly to the audience.

On that score, the leads did an excellent job. A tip of the hat to Ben Stahl, who played both Antipholus parts superbly, to Frank Roberts, who likewise did an outstanding job of the two Dromios, to the flashy and brazen Jodie Chapin for a delightful Adriana, the wife of the local Antipholus, and to Cameron Waters, who not only played a wonderful Aegeon, but then morphed into the second Dromio for the final reveal scene. Stahl, in comparison, does the reveal alone, playing both Antipholus brothers via rapid onstage costume changes reminiscent of the train scene in The 39 Steps.

The set and lighting design by Brett Carr was simple and unobtrusive, which is, at least in my opinion, exactly what works best for most Shakespeare. Skyline and bridge cutouts let us know where we were, but otherwise the stage contained merely ramps, a platform, and hiding spots for the actors to create settings. Costumes by Nena Curley were, I assume, meant to be intentionally haphazard, and were. Clothing ranged from a “hey, look what I found in my closet” top hat and tee shirt pairing, to the “let’s raid the costume shop for something improbable” harlequin top dress sported by Balthasar.

So now it’s time to ask the big question, the one that will tell you whether this version of the classic will delight or vex you. Since we’re so near Christmas, I’ll pose a seasonally themed version of the querry.

When you look at a stately spruce tree, do you think it is majestic and perfect as is, or just waiting to be made special with drippings of tinsel and brightly colored ornaments? Answer that and you’ll know whether what awaits you is an unbridled treat or well-executed burr beneath your saddle.

A Comedy of Errors
Nov 6 to Nov 29, 2015
Lakewood Playhouse
http://www.lakewoodplayhouse.org/