The Night of the Iguana at Dukesbay

The sound and the fury
by Michael Dresdner 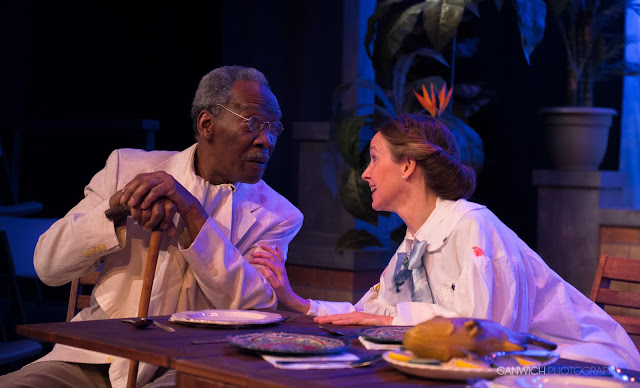 The small but sometimes stellar Dukesbay Theater is currently showing The Night of the Iguana, directed by theatre co-founder Randy Clark. If you are a fan of Tennessee Williams, this is a chance to see one of his less frequently performed plays, though there may be good reason for that. In my view, this production does not represent the finest work of either the playwright or the theatre company.

It’s 1940 on the west coast of Mexico, where former Rev. T. Lawrence Shannon (Mark Peterson,) at one time locked out of his church and into an institution for exhibiting borderline atheism, has morphed into a bus tour guide. He deposits his all female group at the cut rate hotel of his friend, the recently widowed and decidedly salacious Maxine Faulk (Stephanie Leeper), who is more interested in bagging Shannon than gaining hotel customers. 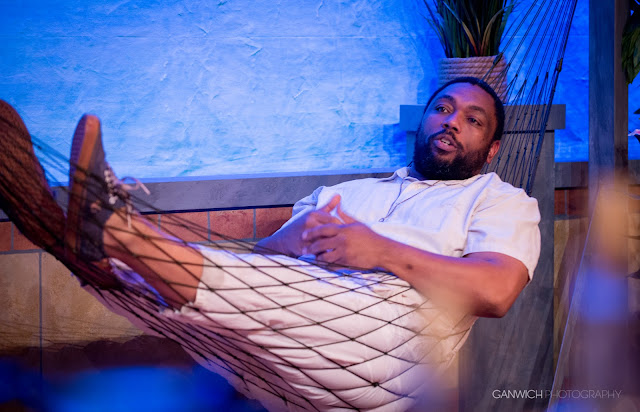 Shannon, peacock proud and intrusively loud, eschews both alcohol and Maxine’s advances, but his irrational and irritable behavior has turned the tour group against him. That and the fact that he indulged his penchant for young girls, this time with 16-year-old tour member Charlotte Goodall (Chevi Chung.) The leader of the tour group, a strident, square-jawed bulldog named Judith Fellowes (Maggie Knott,) is the tour’s own Carrie Nation, assailing Shannon while guarding, albeit unsuccessfully, Charlotte’s morals. 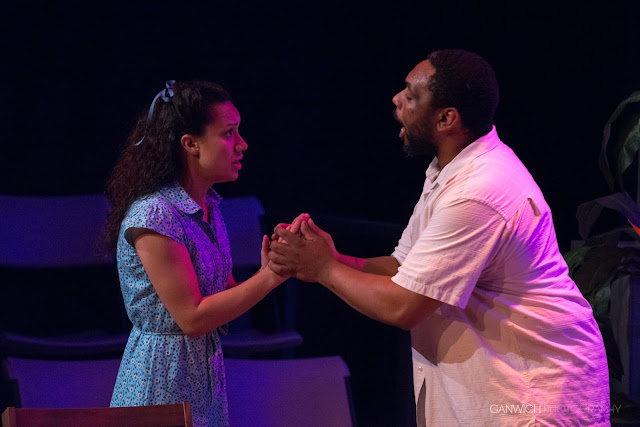 New England spinster Hannah Jelkes (Ellen Peters), an itinerant artist who ekes out an existence traveling with her 96-year-old grandfather Nonno (Malcolm J. West), a former poet seeking to finish his last great work before his death, also show up at the hotel. It is sensible and sensitive Hannah who, after the raging Shannon is restrained from attempting to drown himself, manages to get through to him. Like oil on the waters, she calms both him and the play, and manages to stand out as a rare gentle voice amidst the otherwise rather intrusive on-stage din. It’s much appreciated; in an intimate, 36-seat venue like this, a little volume goes a long way. 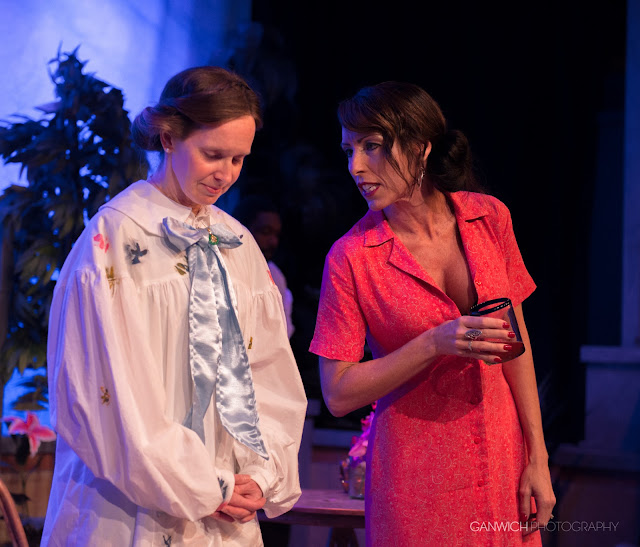 As Shannon finally succumbs to alcohol, apparently one of his other self-destructive demons, he oddly becomes both calmer and kinder. The play moves to its resolution as he and Hannah both manage to clarify their own minds and actions, past and future, by letting down their guard and sharing their stories with one another.

Rounding out the cast are other bit parts, including Shannon’s downtrodden driver Hank (Robert Osborn,) and his replacement, an amiable zhlub named Jake Latta (Jeffery Weaver.) Zhlub, if you were wondering, is one of those hard to define Yiddish terms that suggests a sloppy, compliant, unremarkable plodder. That’s the character, mind you, not Weaver.

All this is played out on one of the nicest sets imaginable, an all faux stone hotel patio replete with ocean view, which was designed by Burton Yuen, built by Hector Juarez, and exquisitely painted by Jennifer York. Bethany Bevier did sound design, Nic Olson handled lighting, and Jeffery Weaver did triple duty as actor, costumer, and props master. Together they provided estimable production support.

In spite of some well-crafted characters, including Weaver’s Latta, Leeper’s stridently sexual Maxine, and the welcome quiet of Peters’Hannah, the production in general suffers from a lack of modulation, nuance, and chemistry, which could be chalked up to actors, director, opening night irregularity, or something else entirely. Hopefully, it will calm down and mesh better as the run continues.

Posted by Dresdner's Theatre Reviews at 10:48 AM